Warning as dead stag found at side of Donegal road 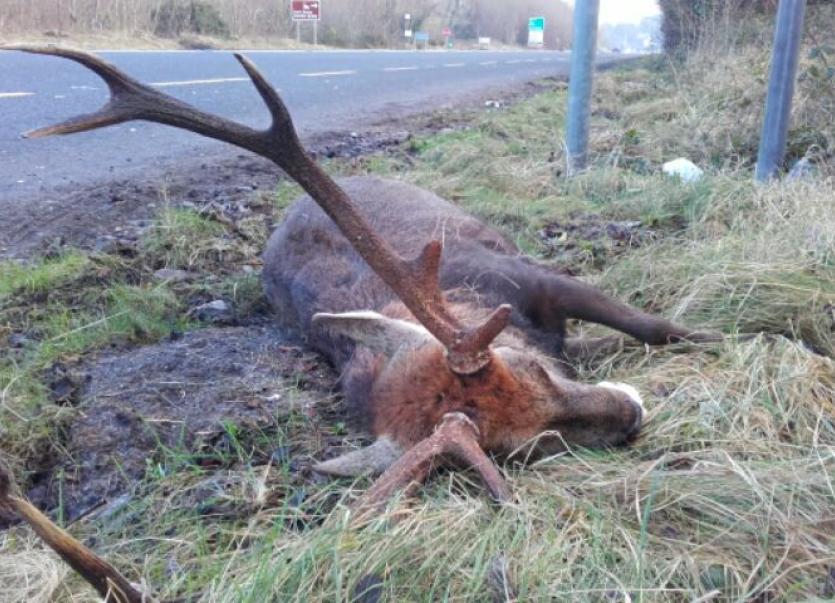 The dead stag at the side of the N15. Photo: Brian Doyle, Cashelard

Drivers in Donegal should be on the lookout for deer, a wildlife ranger has warned.

Lee McDaid of the National Parks and Wildlife Service was commenting on news that a dead stag was found at the side of the N15 this week.

Brian Doyle of Cashelard took this photo of the stag on Sunday when he noticed it on the left hard shoulder of the N15 just south of Kee's of Laghey.

"There were bits of broken glass," he told the Democrat. "It looks like it was hit by a car or lorry.

"I'd imagine the driver is very relieved at his or her luck, that the stag didn't hit the front of the car, because that would have caused very serious damage," Mr Doyle added.

The carcass was still there today (Monday) but the antlers had been removed.

"There are more and more deer in Donegal and people should be aware of that," Mr McDaid, an NPWS district conservation officer in the county, commented.

"At this time of year, deer are on lower ground, and so it's more likely that people will see them.

"Most locals know areas where deer are found and to take extra care when driving there.

"We have are a lot of deer around Laghey - we see them coming into fields fairly often - so that's one area that people should be aware of," he explained.

Any driver who hits a deer should report the incident to the gardaí while anyone who discovers a deer carcass should contact Donegal County Council, Mr McDaid concluded.