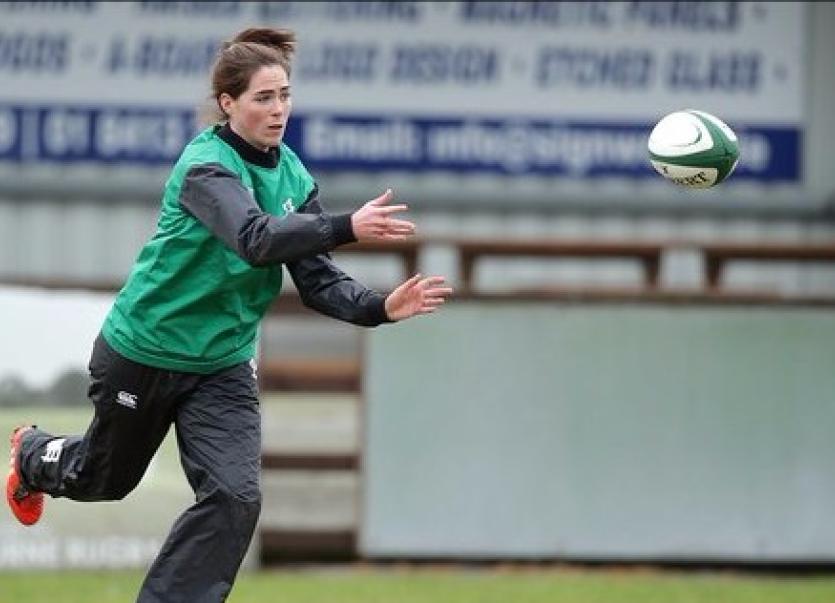 Donegal's Nora Stapleton was central to the Ireland Women taking a dramatic late victory over Scotland in the opening match of the Women's Six Nations on Friday night.

With the sides level at 15-15, outhalf Stapleton provided the final pass for Jenny Murphy to power over close to the posts.
Stapleton added the conversion and Ireland had also secured a bonus point victory, having scored four tries.
Centre Jenny Murphy marked her return to the 15-a-side international arena with the decisive score at rain-hit Broadwood Stadium, preventing the superior Scots from ending an 11-year losing run against their Celtic rivals.
This Cumbernauld venue was the scene of Ireland's 2015 Six Nations title success, but tonight's pock-marked performance was a world away from that 73-3 demolition job.
Player of the match Jade Konkel's two-try salvo inspired Scotland to a deserved 15-10 half-time lead, with Ireland mustering two unconverted efforts from Sene Naoupu (11 minutes) and Alison Miller (23) on the artificial pitch.
Tom Tierney's side made too many mistakes, both in defence and attack, and failed to turn their set piece dominance into scores. Sarah Law's 37th-minute penalty put five points between the teams at the interval.
Ireland were much more clinical when prop Lindsay Peat reached over from a 52nd minute maul - just after Scottish tighthead Lindsey Smith had been sin-binned - but they still struggled to build phases and really stretch the Scots who were hunting for their first international victory since 2011.
In the showery conditions, Law and her half-back partner Helen Nelson both missed kickable penalties and it was left to Ireland to conjure up a match winner, their forwards threatening from a late lineout maul before Nora Stapleton fed Murphy to crash in under the posts.
Shade Munro's ever-improving hosts had hit the front after just four minutes, pressing from an initial lineout maul before Louise McMillan took a great line and a bout of forward pressure ended with number 8 Konkel rumbling over for Law to convert.
Handling errors blighted Ireland's play in the early stages but they pounced on a loose ruck ball in the Scottish 22, using the turnover to feed Miller. Although the winger was hauled down short of the left corner, centre Naoupu did really well to support her and ground the ball under a pile of bodies.
Stapleton's conversion attempt dropped short of the target but Ireland now had the bit between their teeth, captain Paula Fitzpatrick being held up from one attack and then knocking on at the back of an advancing five-metre scrum.
A lapse in concentration let Scotland off the hook amid a prolonged bout of strong scrummaging from the Irish pack. However, the set piece platform, combined with a direct run from Naoupu, wore down the defence and simple hands put Miller over by the left corner flag.
Ireland's own defence was poor, though, as Scotland gained reward via their maul again. On the half hour mark, the home forwards ground their way up to the try-line and Konkel - her country's first full-time female player - got in under the defending Leah Lyons to complete her brace. Law was unable to convert on this occasion.
The visitors' sloppiness at the breakdown led to a turnover and then a central penalty which scrum half Law stuck over, three minutes before the break, as Ireland ended a frustrating first half with a five-point deficit.
Tierney introduced Elaine Anthony and new cap Eimear Considine for the start of the second period, Scotland resuming on the attack before a terrific break from number 8 Fitzpatrick got Ireland back on the front foot.
The Scots were pinned back inside their 22 and lost prop Smith to the bin for taking out Fitzpatrick as a lifter at the lineout. Smith's scrum opponent Peat plunged over from the very next maul, TMO Jon Mason confirming the grounding. However, Stapleton was short again with her conversion attempt at 15-all and the rain.
Law slid a kickable penalty just wide as Ireland's indiscipline continued to give Scotland chances amid a heavier rain shower. The hosts' back-line ignited early in the final quarter, centre Lisa Thomson zooming past Stapleton in midfield and then full-back Chloe Rollie dancing free up the left touchline.
Crucially, Ireland managed to hold out under intense pressure and they watched Nelson drift a 66th minute penalty effort to the right and wide. Scotland had more territory amid a scrappy spell which was broken up by good play from Claire Molloy and Stapleton's clearing kick.
There were three more debuts in a tense finale as Jennie Finlay, Ilse van Staden and Ciara O'Connor formed a new-look front row. A ruck offence was Scottish flanker McMillan allowed Stapleton to kick towards the left corner with the 80 minutes almost up. Scotland infringed again just a few metres out and Ireland stole the verdict thanks to hard-running Murphy's heroics, with the double whammy of the last-gasp triumph and Ireland's first ever Six Nations bonus point at any level.
Ireland Women: Mairead Coyne (Galwegians/Connacht); Niamh Kavanagh (UL Bohemians/Munster), Jenny Murphy (Old Belvedere/Leinster), Sene Naoupu (Aylesford Bulls), Alison Miller (Old Belvedere/Connacht); Nora Stapleton (Old Belvedere/Leinster), Ailsa Hughes (Railway Union/Leinster); Lindsay Peat (Railway Union/Leinster), Leah Lyons (Highfield/Munster), Ailis Egan (Old Belvedere/Leinster), Orla Fitzsimons (St. Mary's/Leinster), Marie Louise Reilly (Old Belvedere/Leinster), Ciara Griffin (UL Bohemians/Munster), Claire Molloy (Bristol/Connacht), Paula Fitzpatrick (St. Mary's/Leinster) (capt).
Replacements used: Elaine Anthony (Highfield/Munster) for Fitzsimons, Eimear Considine (UL Bohemians/Munster) for Kavanagh (both half-time), Mary Healy (Galwegians/Connacht) for Hughes (69 mins), Ilse van Staden (Cooke/Ulster) for Peat, Ciara O'Connor (Galwegians/Connacht) for Egan, Jennie Finlay (Old Belvedere/Leinster) for Lyons (all 71). Not used: Nichola Fryday (Tullamore/Connacht), Claire McLaughlin (Cooke/Ulster).