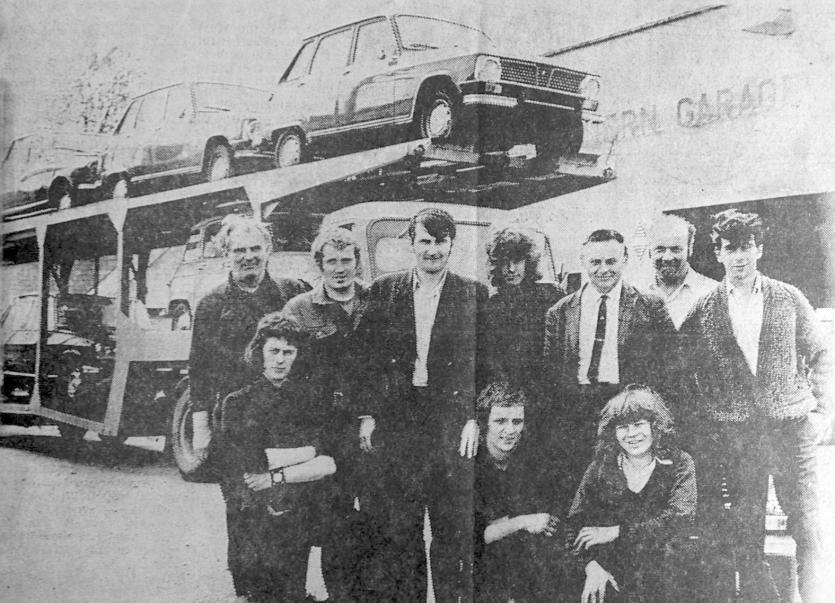 A nostalgic image of staff at the Northern Garage in Donegal town.

As one of Donegal’s best known garages celebrates 50 years in business, the continued commitment it has shown to its large customer base has been built on best practice in every aspect of customer service.
Northern Garage Ltd, the well-known family-run business in Donegal Town, mark a significant milestone with a half century of providing the best in motoring services in Donegal.
Founded by Robert “Bobby” Glenn in 1966, the business has grown and developed and is now run by his children, Robert and daughter Celine who are proud to keep the family tradition going for future generations.
While Bobby had a passion for cars, his first job was as a skilled printer in the print and newspaper industry.
His daughter, Celine Duncan, explains that Bobby started out working for Dunleavy’s before moving to the Donegal Democrat in Ballyshannon. He later moved with his wife, Sadie, from Killymard and young family to Dublin to work in the Irish Independent in 1954. The family subsequently crossed the Atlantic where he worked for the Boston Globe newspaper.
However, it was the motor trade where Bobby’s heart lay, and on their return to Donegal he got the chance to buy an established garage business.
“We went to America in 1963. Daddy always wanted to travel but they didn’t like it. He worked in the Boston Globe. Even though he was a printer, he loved cars from a young age,” Celine said.
She said her father would often trade cars when he worked as a printer in Ireland and even took up a second job driving a taxi in America.
“They really did work hard, but they came back in 1966. I would say we were not back a few weeks when Daddy had the place bought. He bought it off Josie McGarrigle and William Thomas Smith. It was very small at that time. There was a small shop there for a while,” she added.
From there they grew the business, offering a full range of mechanic services, fuel and parts. They became a dealership for Renault in 1967. Bobby sold the first new Renault for £440.
Celine recalled the days when she would come home from school and help out the business by pumping petrol from the single pump they had in the early days. The price for a gallon of petrol back then was one shilling and eleven pence.
“I loved the garage from day one. I took that from dad,” she said.
Robert also had a keen interest in the business and was given the chance to get involved straight from school.
“Daddy handed it on to Robert. He built a good business to hand over and it was his idea to open the stores as things were not great at time. That was one of the things Dad thought would boost it and it did help,” Celine explained.
They now continue to offer a great range of services from testing light commercial vehicles, autofactors, repairs, and the best value hand-attended uel in the area seven days per week.
Celine said they are grateful to all their loyal customers over the years and look forward to building on the history and traditions they have as one of the longest established garages in the north west.