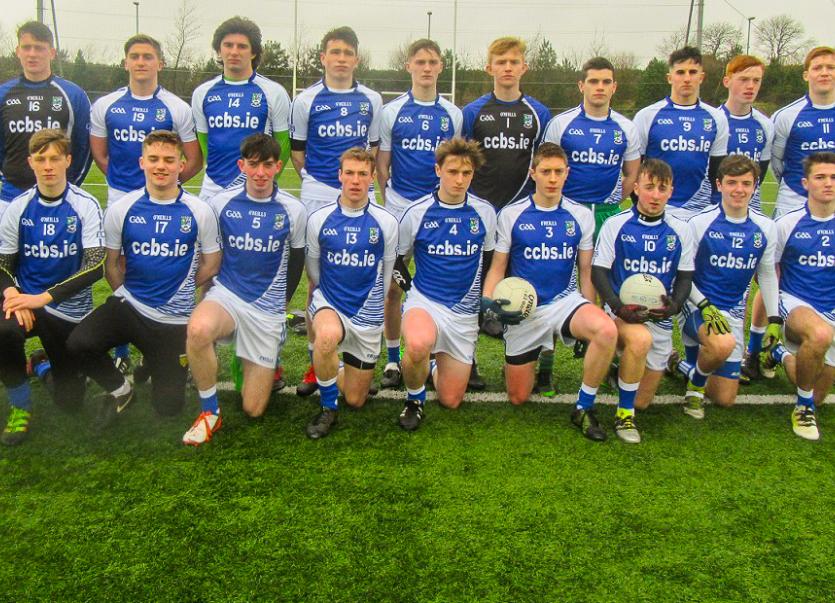 CCBS U18 Boys Gaelic in Final of Markey Cup

Congratulations to our U18 Boys Gaelic team on securing their place in the final of the Markey Cup after a hard-fought battle against St. Joseph's of Donaghmore last week. Conditions were difficult in Garvaghy with a strong wind and an ice-cold drizzle. This didn't hold back the CCBS team as they reached half-time 0-10 to 0-6 ahead. Coláiste Cholmcille started strong in the second half with a goal from Matthew Mc Clay. St. Joseph's began to rally, gaining a few points, but the second half ended in Coláiste Cholmcille's favour. They will now meet the winners of Coláiste na Carriage and St. Patrick's, Keady, who play next week. The big men of Coláiste Cholmcille stood out on the day, especially Shane Mc Grath, Nathan Boyle, Dean Carroll, Oisín Rooney, Jason Granaghan and Dylan Gallagher. COLÁISTE CHOLMCILLE, BALLYSHANNON: Seán Taylor; Cian McGloin, Cathal McSherry, Connor Feighney; Conall Sweeney (0-1), Robbie Ryan, Jason Granaghan; Matthew McClay (1-0), Dean Carroll (0-5,3f); Ryan McKenna, Shane McGrath (0-3), Michael McKenna (0-1); Dylan Gallagher (0-2), Oisín Rooney (0-2), Nathan Boyle (0-1). Sub., Caelán Drummond for McClay.

Well done to the TYs, First Years and Business teachers on winning the Make A Wish Foundation School Entrepreneurship Awards for the first ever CCBS Christmas Fair which took place in December. The event was organised by Transition Year students working closely with their Business teachers Yoland Gallagher and Nicola Conlon, along with many enterprising First Year students. Over €1700 was raised for the Make A Wish Foundation. 10 students will represent the school at an awards ceremony in Dublin on Friday 3rd March. 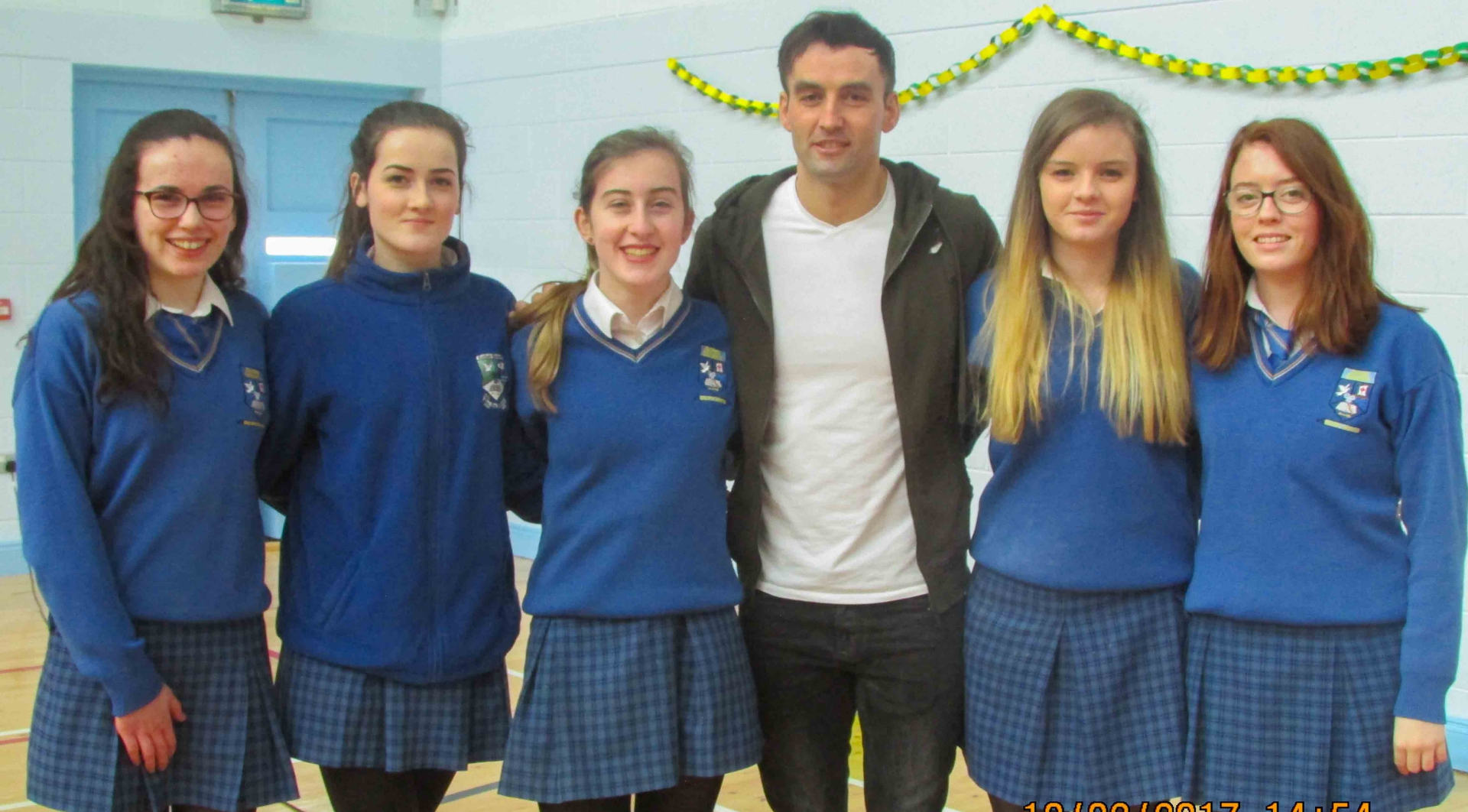 Hogwart's Bank, the school bank organised by a group of TYs working with AIB, had its official launch on Friday 10th of February, with special guest Karl Lacey in attendance. The Donegal player gave a short talk to the students about the value of hard work and seizing the day. He gave special mention to all members of the bank for organising the opening and was really grateful for his invitation. The first year students were really interested in what he was saying and they learned a lot from him.

The opening was a great success. It was open to all First Years and a few students from other year groups also attended. The staff of Hogwart's Bank prepared Donegal-themed home baked goods for after Karl's talk and this went down very well with everyone in attendance. There were photo opportunities with Karl Lacey as well as an instagram photo booth for the students. The hall was decorated with Donegal bunting and flags adding to the great atmosphere.

Hogwart's School Bank is a part of the AIB Build a Bank competition. It is being run by 6 TY students: Kelly Vaughan, Aoife Cassidy, Áine McSharry, Ríonach Sheerin, Katie Slevin and Grace Dinsmore, with help from their mentor Darragh Fallon of AIB. The bank opens in the school every Thursday at break time allowing students to open bank accounts and lodge money. 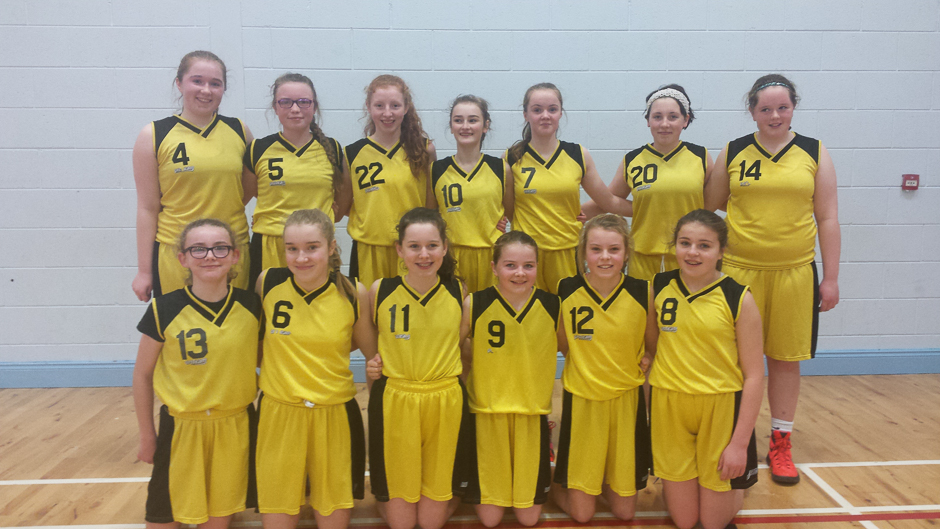 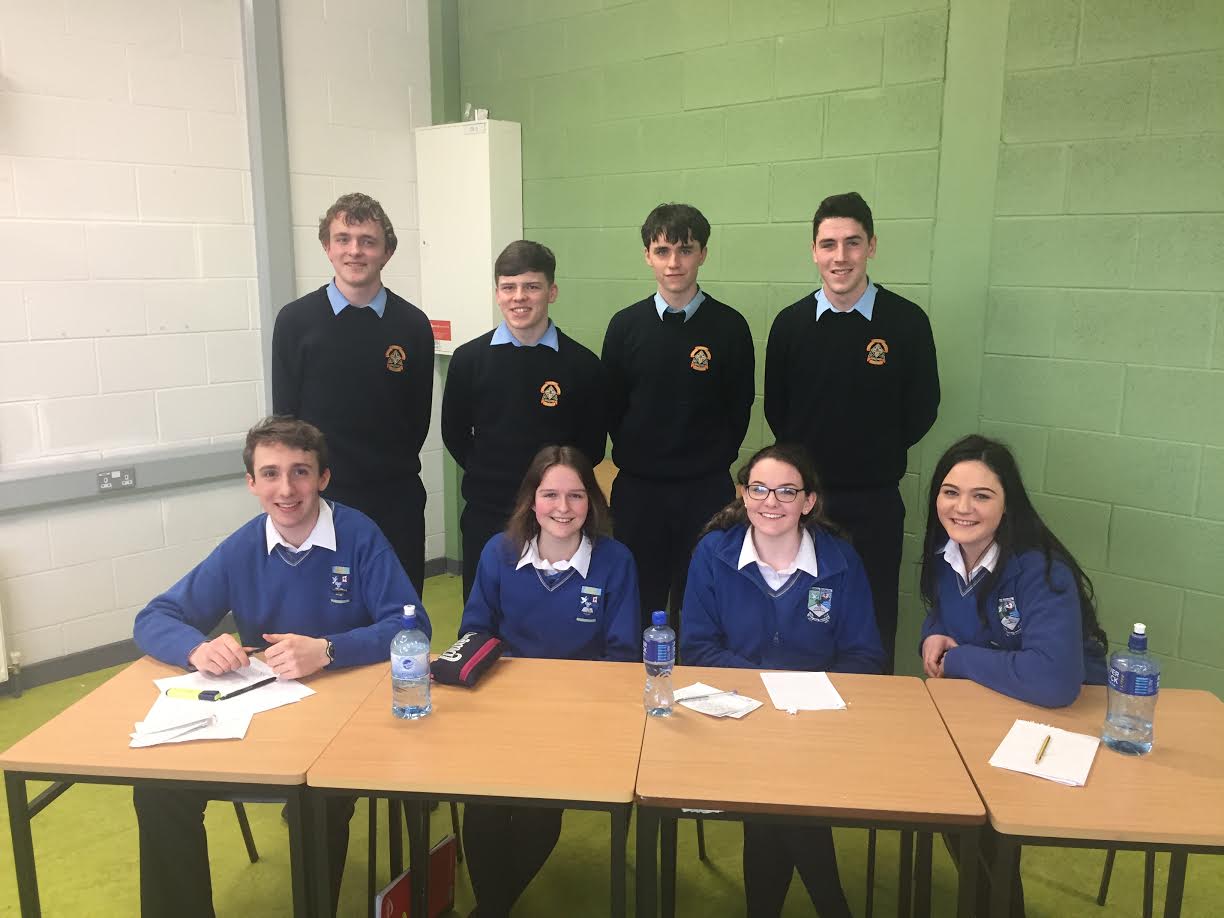 German Debate Team
Well done to the German debate team of Michael John Gillen, Mary Flora Scott, Laura Cleary and Edel Foley who performed admirably in the third round of the Siemens GDI German Debate. On Thursday 2nd February they debated St. Patrick's College Cavan in Cavan and very narrowly missed out on progressing to the fourth round. This was the furthest a team from Coláiste Cholmcille has ever gone in the competition. Mr. Eamonn Maguire and Mr. Peter Walsh were delighted with the performance of the team throughout the competition and also with the loyal band of supporters who were there for all the previous rounds, in particular Tom Geraghty who acted as timekeeper during the debates.

Zombies in All Ireland TY Drama
Congratulations to Miss Garvey's TY 1 Theatre class on getting through to the final of the All Ireland TY Drama Competition. The competition will take place on March 3rd in the Mullingar Arts Centre (a change from the traditional Briery Gap Theatre in Macroom, Co. Cork, which is closed due to fire damage). The TYs will present their show 'How To Survive the Zombie Apocalypse', a hilarious take on the end of civilisation as we know it. Coláiste Cholmcille have a long tradition in the All Ireland competition, having made it to the final every year for the last six years. Break a leg!

Open Day A Great Success
Our Open Day last week was a great success, and all at Coláiste Cholmcille would like to thank the sixth class pupils, their teachers and their parents for such a great day. During the school day, pupils took part in a range of taster classes such as Woodwork and Home Economics, and there was some excellent musical entertainment for them at lunchtime. Later that night, many of the same young people returned to the school with their parents, this time to enjoy a tour of the school and to view some demonstrations in various classrooms.

LCVP Visit to Cara Pharmacy
Sixth Year LCVP students visited Cara warehouse last Wednesday as part of their course. They enjoyed a tour of the open plan offices, the warehouse floor and took part in a Q&A session with owner Ramona Nicholas in the boardroom after. The students had prepared questions in advance and Ramona was informative, open and entertaining in her answers. She gave a real insight into running and growing your own business. Students got to see the different roles in the business from marketing to graphic design and how the warehouse stocks the 16 shops Cara currently own.

TY Trip to AIB, Dundrum
A number of TY students were delighted to visit AIB's technology hub in Dundrum last week. The LAB (Learn About Banking) is an innovative banking experience where students can learn about the future in banking technology. They get to test out upcoming technology which the bank hope to roll out to other branches if they receive positive feedback.