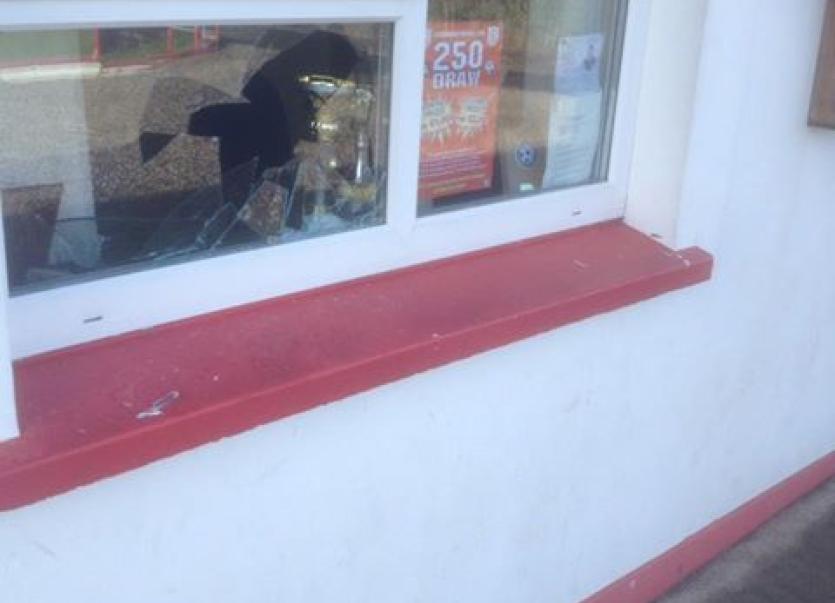 The window that was smashed to gain entry at St Patrick's Park clubhouse in Carndonagh.

The chairman of Carndonagh FC soccer club says a break in at the clubhouse sometime over Tuesday night was an “attack on the community”.
Local area councillor, Albert Doherty, who is also chairman of Carndonagh FC, said the break in occurred at St Patrick’s Park sometime between Tuesday night and Wednesday morning.
A window was broken and the intruder, or intruders, entered the club and searched a number of rooms and ransacked a filing cabinet but left empty handed.
Gardaí are investigating the matter.
Cllr Doherty said groups were playing football at the all weather pitch on Tuesday night and the place was locked and secured when they finished for the night. The next morning club committee member arrived to see a window smashed.
“There was nothing of significant value taken but the window was smashed and it was left with blood stains on it. The sad thing was we had to cancel the under-8 and under-10’s training the next day, but we are back up and running now. This is a busy place and it is used all the time by local people and this is an attack on the community,” he added.
Cllr Doherty also appealed for anyone with any information of the incident to contact Carndonagh Garda Station.