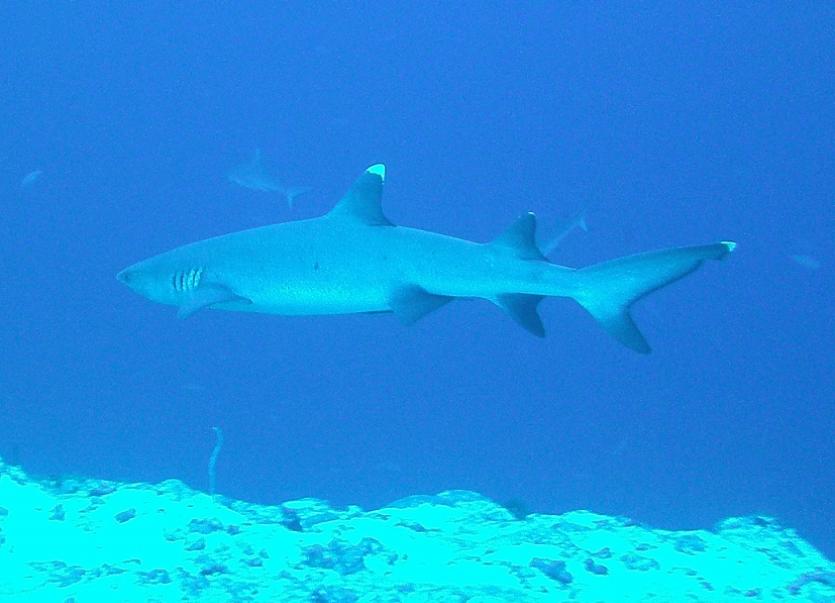 Sheephaven divers came upon white-tipped reef sharks in the Maldives.

The Sheephaven club members who were part of a Donegal contingent of divers to the Maldives returned home last week, with stories of warm tropical waters and abundant exotic marine flora and fauna.

The Maldives, a nation state of islands, are situated in the Indian Ocean and requires a Emirates Airline flight departing from Dublin with a three-hour stop in Dubai, before arriving in the international airport of Male, flying out on Friday and returning the following Saturday.

The dive party spent the week on board the luxurious liveaboard yacht the ‘MY Maldives Explorer’, which is 33 metres long, 10 metres wide and powered by a 500hp Hyundai engine. Typical of such liveaboards, she has three decks of cabins, plus an additional sundeck and is equipped to accommodate 16 passengers in seven cabins.

On this trip the passengers were made up of a mixture of Austrians, Germans and Irish. The daily diving routine involved up to three dives per day to no deeper than 30 metres per dive, with a return to surface limit of no less than 50 bar air remaining or no greater than an hour's diving.

Over the week a total of 17 dives were conducted using a day boat, the ‘Shore Line’, from which all air or gas mixes were supplied - most of the dive party paid the extra charge of diving on Nitrox. Over the week the divers were cared for by a 22-strong crew, with reports of excellent hospitality and great food.

In-water conditions were idyllic, with water temperature of 30 degrees Celsius and visibility at well over 20 metres horizontally, which showed to full effect the fantastic fish and coral life.

The Sheephaven divers returned with underwater photos and videos of Gregorian and table top corals, large clams with their vibrant violet filters, shoals of pelagic fish, thornback and torpedo rays, moray eels and even more impressively green and hawksbill turtles.

But the stars of the show were the sharks and rays, in particular the white-tipped reef and nurse sharks that were seen in large numbers as were the massive manta rays.

The manta rays are quite accustomed to the presence of divers, indeed it appears as if they seek them out, attracted to the divers' bubbles from the exhaled open circuit scuba gear.

The night dive video of the sharks loitering in the distance captured by Kieran McGlynn is quite spectacular and can be viewed on the Sheephaven Facebook page, along with a number of other photos and videos that gives a taste of one of the best dive locations in the world. Indeed we are reliably informed that after experiencing a week of liveaboard diving in the Maldives a shore-based dive holiday just cannot compare.

On Thursday evening, Sheephaven Search and Recovery were honoured by the extended Gildea family when they made a substantial donation to the club's S&R Unit.

In conjunction with Highland Motors, a 5km sponsored walk/run was organised and the money collected was divided between Sheephaven S&R and Pieta House, for which we are truly appreciative.

Finally, 7.5 degrees Celsius doesn’t put Sheephaven snorkelers off going into the water. There is nothing more refreshing than getting into the cold water at Portnablagh on a Sunday morning.

Visibility was great throughout the 50 mins in the water - well, two of the snorkelers' GPS went a bit astray so they took a little bit longer. Nonetheless the training sessions for the Tory snorkel challenge in June are going well.

Everyone at Sheephaven SAC was delighted to welcome back Derek Flanagan and Michael Lyons to the club snorkels. It was a pleasure having them join us on Sunday morning. Keep up the good work everyone!!