PLAYER RATINGS: How the Donegal players fared against Tyrone in Ballybofey 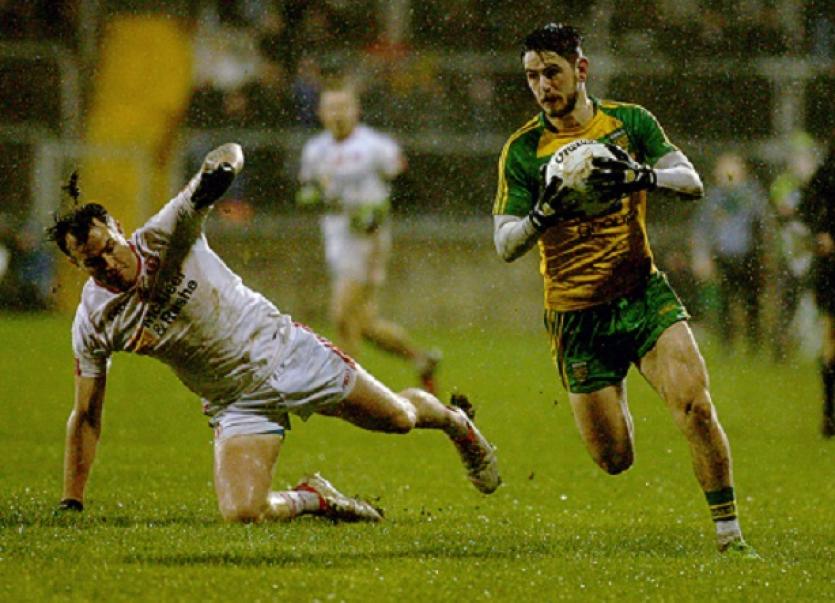 Ryan McHugh . . . man of the match for Donegal against Tyrone

Donegal got the better of Tyrone in the Allianz National League in MacCumhaill Park, Ballybofey 0-12 to 0-6. There were plenty of very good performances from the Donegal players.

Mark Anthony McGinley: Solid display although he almost undone the good work with a late kick-out that was almost punished. 7

Paddy McGrath: What’s seldom is wonderful. McGrath added his second intercounty point, a magnificent strike from out on the right. Picked up a black card, but was strong throughout. 7.5

Neil McGee: Went for a chat with the umpires when rows were breaking out around the middle in the second half. Tyrone know the Donegal square is a no-go area when McGee is there. 7

Eamonn Doherty: A late call up for Caolan Ward, Doherty had his best ever display in a Donegal jersey. Solid throughout. 7

Eoghan Ban Gallagher: In the thick of the action and got forward for plenty of runs. Will be hoping for a double against Tyrone in the U-21 on Wednesday night. 7

Frank McGlynn: Man of the match in the opening half, McGlynn was withdrawn at half-time with a hamstring strain. 7.5

Paul Brennan: The Bundoran man had his best game of the league to date, involved in many of the moves, especially in the opening half. 6.5

Michael Murphy: Again at midfield, Murphy’s influence on this present Donegal team continues to be central. 7.5

Martin O’Reilly: Worked tirelessly throughout and saved Donegal’s bacon when Tyrone threatened a goal late on. 7.5

Eoin McHugh: Was involved in quite amount and got a good point. Probably takes the ball into traffic a little too much. 7

Ryan McHugh: My man of the match, McHugh hit two points but his work in general play was excellent. 8

Michael Carroll: Missed a good chance in the opening half but this was probably Carroll’s best outing so far. Will learn from the experience of these tough games.

Hugh McFadden: Hit two great points and is finding a place for himself at full-forward. 7

Jamie Brennan: On a difficult night for corner forwards, Brennan worked extremely hard and also did good work in defence. 6.5

Cian Mulligan: In at half-time, Mulligan showed his class and hit a good point. 7

Mark McHugh: In for Paddy McGrath after his black card, McHugh didn’t do much wrong. 6