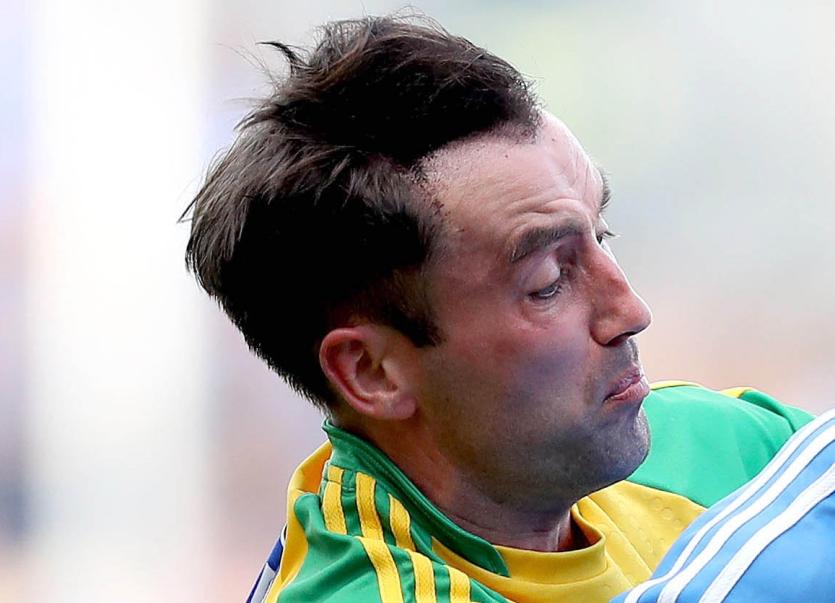 Karl Lacey . . . back in action against Glenswilly

After an early Keelan McFadden point for the home side, Four Masters hit the lead with points form Dara Quinn and Kevin McBrearty. Thereafter for the remaining 50 minutes, the visitors led the way until two late points from Keelan McFadden brought parity to the proceedings.
Keelan McFadden was Glenswilly's main threat and scored 3 first half points, two of these from frees. Dara Quinn had opened the visitors account, followed by three from Kevin McBrearty, as Four Masters intricate weaving runs were breaching the Glenswilly defence.
On 19 minutes, Darren Doherty raced through on Philip ODonnell and was fouled for a penalty. Kevin McBrearty struck it well but O'Donnell got down excellently to save to his right. This was the only blot on a strong performance from the big Four Masters midfielder who finished the day with four points.
Glenswilly now had the breeze for the second thirty minutes and one would have thought the home side would come out of the blocks and push on through the gears but it was Four Masters who extended their lead with an excellent Patrick Reid fisted effort. Sean O'Kennedy then went on a mini scoring spree of his own, splitting the posts on three occasions without reply, to extend Four Masters lead to 0-08 to 0-03.
Karl Lacey was introduced in the second half and had an immediate impact with some strong running but was soon sidelined with what looked like a bad gash to the face. Glenswilly then found a route back into the game as Ciaran Bonner lobbed a speculative effort from distance which made its way to the Four Masters net thanks to the fist of Paddy Diver. Keelan McFadden added another point but Kevin McBrearty landed a monster free against the wind to restore the visitors advantage.
The final minutes were helter skelter to say the least but it was left to Keelan McFadden to equalise deep in injury time to give Glenswilly their first point of the league.
GLENSWILLY: Philip ODonnell, Martin McAteer, Eamon Ward, Patrick McFadden, Ciaran Gibbons, Aiden McDevitt, Conor Boyce, Caolan Kelly, Ciaran Bonner (0-01), Ciaran Hunter, Cathal Gallagher, Paddy Diver (1-00), Oisin Crawford, Keelan McFadden (0-05). Subs Used Leon Kelly.
FOUR MASTERS: Ryan Haughey, Ryan ODonnell, Kevin Breslin, Enda Bonner, Dylan Kennedy, Dara Quinn (0-01), Sean O'Kennedy (0-03), Leo McHugh, Kevin McBrearty (0-04), Caolan Loughney, Emmet Doogan, Sean Meehan, Josh Lacey, Patrick Reid (0-01), Darren Doherty. Subs used - Karl Lacey, Jason Duignan.