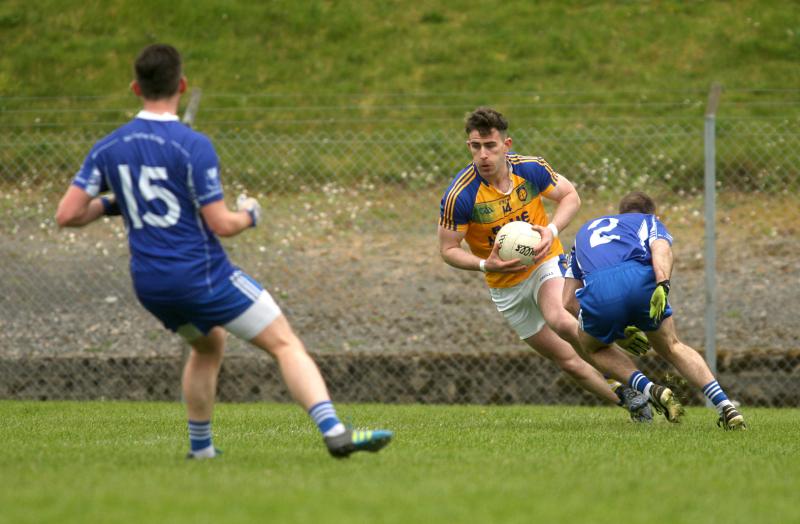 Patrick McBrearty on the ball for Kilcar against Four Masters

Kilcar picked up both league points after a very poor standard game against Four Masters in Tirconaill Park.

The quality on view was really poor, only made bearable by a couple of snatches, mainly from Kilcar.
Four Masters were without Karl Lacey (on holidays) while Kilcar lined out with the McHugh brothers Mark and Ryan as well as U-21 player, Stephen McBrearty.
Both sides turned over possession with some poor passing and with just a month to the senior club championship, there will be a need for some ball work in the next few weeks in Donegal Town and Towney.
We thought it was poor in the first half, but it got no better as there was 15 minutes and 5 seconds on the clock before the first score arrived in the second period.
There were only brief bursts of quality in the first half. They came with a burst of points from Kilcar midway through the half and a well taken goal by Ashley Carr on the stroke of half-time
Four Masters struggled to make an impact up front despite Emmett Doogan first timing the opening point on three minutes.
Kilcar got their noses in front through a Patrick McBrearty free and a good point from play from Eoin McHugh.
Then came a brace of points inside a minute, both classic scores from Ciaran McGinley and Mickey Hegarty. McGinley won a mark from a kick-out but drove on to drive over, while Hegarty tacked on one with his left.
Conor McDaid had Four Masters only other point of the half on 21 minute, and it could have been a goal if he had released the ball.
Ciaran McGinley nearly had a classic goal at the other end as he cut through and the ball rattled the crossbar on its way over.
Then came the goal, Eoin McHugh and Matthew McClean involved before Andrew McClean found space in front of the Four Masters goal and he set up Ashley Carr to hit an empty net and leave Kilcar 1-5 to 0-2 ahead.
The only thing to report in the third quarter was one great block from Barry Dunnion, before Dara Quinn, one of Four Masters better players, got forward to break the scoring deadlock just past the 45th minute.
It seemed as if it sparked Kilcar to life as they hit back within a minute from Matthew McClean and Patrick McBrearty pointed a free a couple of minutes later.
Then came the other piece of quality in the game with Patrick McBrearty hitting a magnificent 40 yard pass to outstrip the Four Masters defence and send Matthew McClean clear. McClean drew the 'keeper and set up Aodhan McGinley for an easy finish to the net.
That was on 48 minutes and it proved to be Kilcar's last score. But as they led 2-7 to 0-3, there was no danger as Four Masters lacked punch up front. They did get two late points from Kevin McBrearty (free) and Josh Lacey, but they never looked like bridging the gap.
Both sides have plenty of room for improvement but they will be without all of their county players next weekend as there is a round of star games.