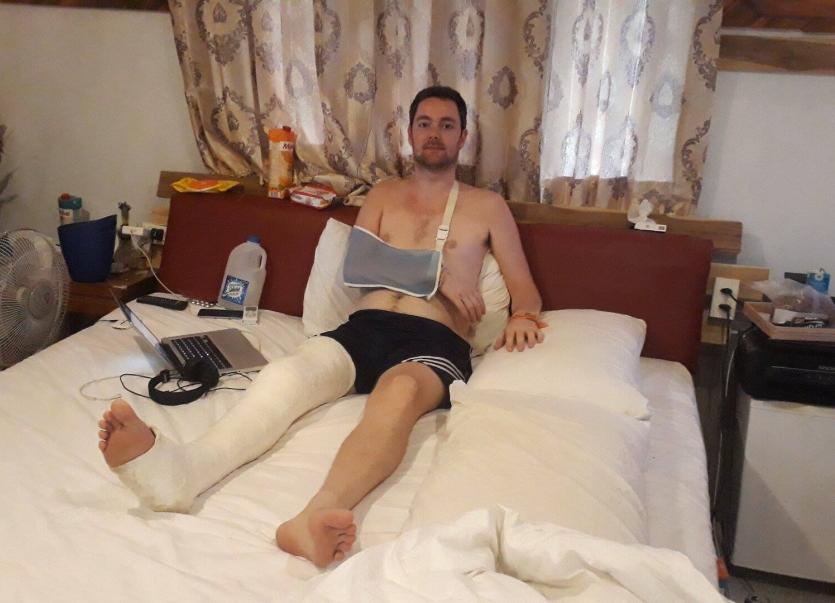 A Letterkenny man stranded in the south east Asia country of Laos, says there has been a very strong response to a fundraising campaign to help bring him back to Ireland for medical care.
Jonathan “Jonny” Dunne, 25, had been on a dream trip around the world when he was involved in a motorcycle collision in March that has left him with very serious injuries including a broken leg and a paralyzed arm.
He is currently still in Laos, but is hoping to return home in the coming weeks to get the medical help he needs.
Jonny recently launched a crowdfunding page - https://gogetfunding.com/help-bring-jonny-home/ - to help with the cost of his travel and care and says he has got a great response but he still has to hit the target amount to cover the costs.
“It has gone really well and the campaign is at 90% of what I need to reach and every little bit will help. My family and friends, and many strangers I don’t even know, have helped out and I want to thank them all wherever they are”, he added.
The crash was between him, another motorcyclist who sadly passed away and a Tuk Tuk taxi driver.
Speaking from Laos today Jonny says he is now out of hospital and is being cared for by friends who are also helping him with the language barrier with medical staff.
He said the hospital care was basic and he is concerned now that his right arm is still paralysed and getting this examined in Ireland will be a priority when he gets home.
“Basically I have a full cast on my right leg and I would not be able to travel but I’ll be getting a half cast on in three weeks and should be able to fly then. My shoulder is broken and may have nerve damage and I really need to get it seen to. I am worried about my arm,” he told the Donegal Democrat.
He said he felt that his injuries could have been much worse if he had not been wearing a crash helmet.