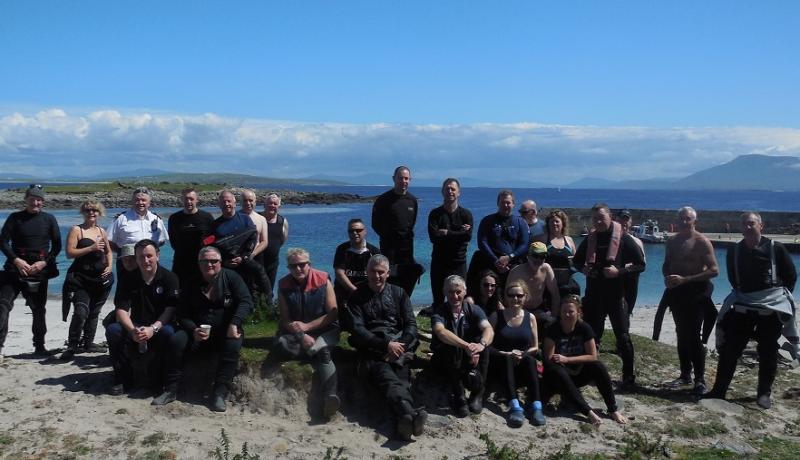 Some of the CFT Search and Recovery Team at Inishkea, County Mayo.

Sheephaven SAC’s activities last week were firmly focused on the club's involvement with search and recovery, starting on Friday with a fundraising event and continuing over the weekend with their participation in the ongoing underwater search in County Mayo for the two missing crew members of Coast Guard helicopter Rescue 116.

Club PRO Caroline McGee had previously engaged with Tesco Letterkenny for Sheephaven SAC to be a beneficiary of their community fundraising programme in the last round of donations. As a result, the customers at the Letterkenny store donated over €300 to Sheephaven Search and Recovery Unit, which is used to assist in financing the annual cost of running the volunteer service.

Every cent of these funds is very welcome indeed and Sheephaven Search and Recovery Unit wishes to express their sincere gratitude to the customers of Tesco’s but especially to the store manager and his staff, who came to the clubhouse in Downings to make the donation, for their involvement in this initiative. 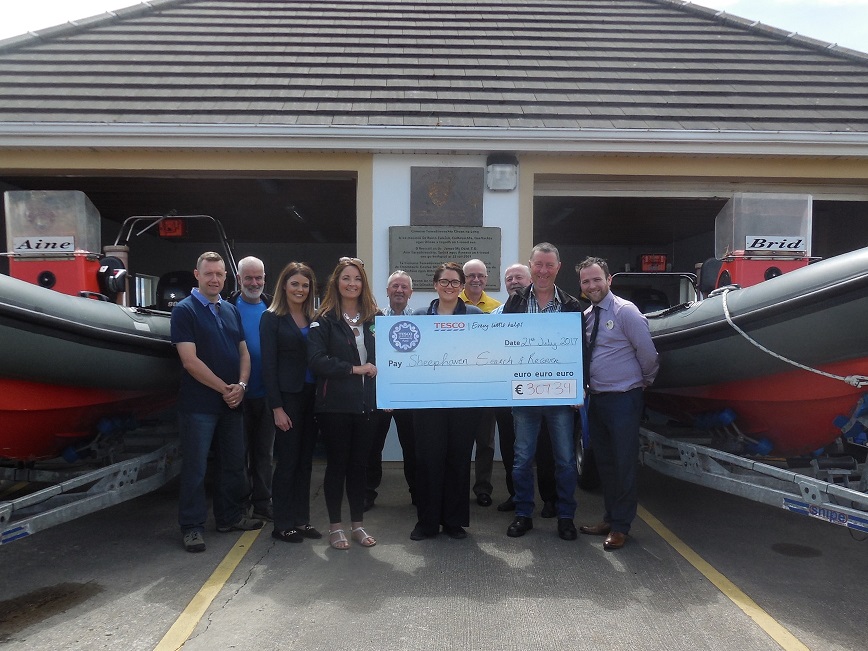 The Tesco Letterkenny Community Fund made a donation to Sheephaven Search and Rescue Unit.

The money collected and a lot more besides was put to good use over the weekend, when a team of Sheephaven S&R Unit personnel was part of a larger contingent of divers, snorkelers and coxswains who were assembled in Blacksod, County Mayo, to conduct another underwater search for the missing crew of Coast Guard helicopter Rescue 116.

The weekend's search activities were under the command of Garda Superintendent Tony Healy and the Coast Guard Divisional Manager Derek Flanagan.

Using a service level agreement protocol with the Underwater Council of Ireland (CFT), the National S&R Coordinator John Joe Rowland was tasked with assembling a dive party to search previously inaccessible parts of the Mayo coastline in proximity to Black Rock and Blacksod Bay.

Twenty-five divers from Donegal Bay, Galway, Grainne Uaile and Sheephaven SACs began to arrive on Friday evening and were ready first thing Saturday morning to conduct a series of four dives over Saturday and Sunday.

In near perfect weather conditions. a small flotilla of charter, Coast Guard, Garda and dive boats put out from Blacksod Bay and commenced the first of two dives to the south of Inniskea Island. On Sunday their focus moved to the north of the island, where a further two dives were carried out.

While the overall result of the dives was unsuccessful, the search authorities can now be satisfied that the coves, inlets and caves that were searched can be discounted from future considerations.

The areas searched are in a very exposed part of the Mayo shoreline and constantly subjected to the full effects of the Atlantic swell, so the calm conditions prevailing over the weekend provided the ideal opportunity to send in divers to check out these sites.

Such operations do not occur spontaneously and require a lot of logistical support, both ashore and in the water.

Onshore the community of the Belmullet peninsula has been an example of volunteerism in providing boats, accommodation and food to visiting searchers, and last weekend they continued in that fashion.

The divers were put up in people's homes and fed by the ladies and gentlemen of Aghleam, County Mayo over the weekend, for which everyone involved is truly appreciative.

Other people who deserve a special mention over the weekend include John Gallagher of Teach John Joe, for coordinating the local activities; Garda Sergeant Aiden Gill, for his cooking skills on Saturday afternoon; and finally boatman Pat Cowman, skipper of the Mac Bel, that led the boats safely to and from the various dive sites.

The mandatory two-hour break between dives was undertaken at the renovated cottage of the maternal family of Sheephaven SAC club member Ciara Corcoran. Ciara’s grandmother had been born on Inishkea Island and would have been one of the families evacuated in 1932 after a great storm in 1927.

On Saturday afternoon, in brilliant sunshine, the contrast of the sharp colours of white sand with the blue sea and sky was a vivid expression of the beauty of the locality.

However the grim reminder of the power of nature was always on the mind of the divers as they stuck to their task over the series of four dives.

In-water conditions were at their optimum, with water temperatures of 15 degrees Celsius and at least 15 metres of horizontal visibility, allowing the divers to conduct a swim line search for up to an hour in duration if required.

Coves and inlets that were too shallow for diving were searched by the snorkelers, and at the final wrap-up on Sunday there was a degree of confidence that both above and below the water was searched as best as they could possibly be.

Once again Sheephaven divers would like to thank the generosity of the people of the Belmullet peninsula for their hospitality over the weekend but would also wish to continue to extend their condolences to the families of those involved in the loss of Rescue 116. Ar dheis Dé go raibh a anam.