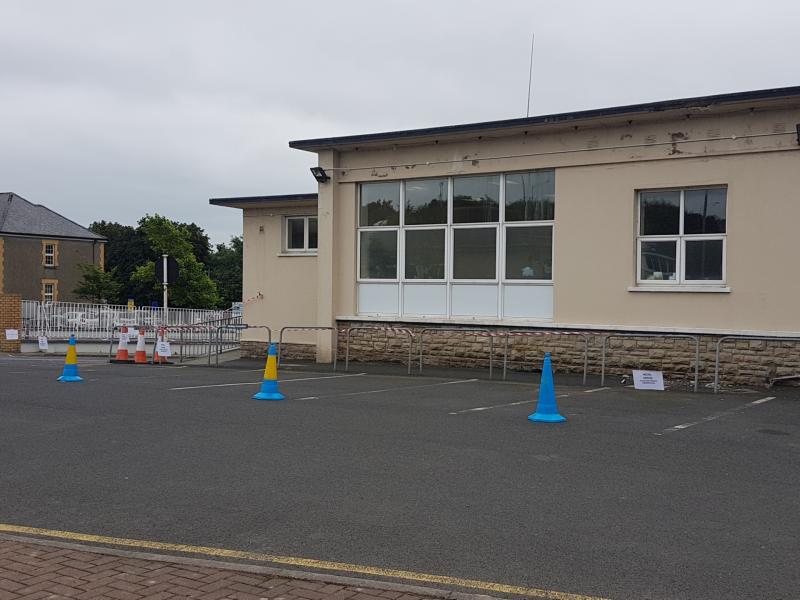 The scene of the partial roof collapse.

The cathaoirleach of Donegal County Council is seeking urgent answers from both the HSE and Management at Letterkenny University Hospital after part of the roof covering the hospital’s former Emergency Department collapsed over the weekend, with debris falling onto a busy walkway adjacent to the building below.

Cllr McMonagle has called for an explanation from authorities into what caused the collapse and what measures are being taken to ensure that the structure does not pose a risk to visitors, patients or hospital personnel.

The Letterkenny-based Sinn Féin said: “From what I understand and after having been up at the site over recent days, this incident occurred in the very early hours of Sunday morning last.

“It appears that sizeable chunks of the roof of the former Accident and Emergency Department broke away from the building and landed on the footpath below.

“This is obviously very concerning, particularly given the fact that the building is on the main hospital campus and visitors to the hospital using the surrounding side car park must use this walkway along this route in order to access the main hospital building and reception area.

“I’ve been up to see for myself the extent of the damage caused and to say that it was a miracle that no one was hurt or seriously injured is an understatement.

“While the area in question has now been cordoned off and the hospital has eradicated a number of barriers and signs to warn people not to use the pathway, this whole incident has raised a number of serious questions as to how this happened in the first place.

“We are talking about parts of a concrete roof here and, while thankfully no one appears to have been injured on this occasion, the HSE and hospital management must be held to account here.

“This is why I am now seeking urgent answers from authorities over what led to these events, and what action is being taken to ensure that no similar collapse occurs at the site.

“The safety and well-being of hospital staff, patients and visitors must be a priority and this is why I do not intend to let this matter rest until a full explanation is forthcoming.”