Fundraiser collects more than €15,000 for young boy's treatment and aftercare 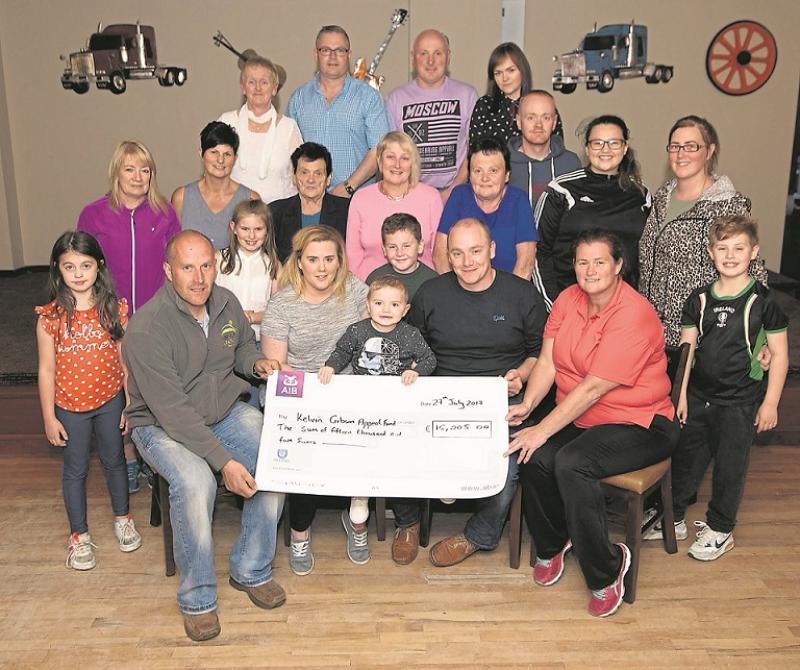 Kelvin Gibson, surrounded by family and friends involved in the fundraising event for his treatment. Photo: Clive Wasson

An east Donegal community has rallied around a young boy and his family after the boy was diagnosed with a brain tumour.

“We’re just overwhelmed by the support,” Marie Gibson of Ballyholey, Raphoe, grandmother of 3-year-old Kelvin Gibson, said. A recent fundraiser at Biddy Friel’s of Drumoghill raised more than €15,000 to help the family with the treatment and aftercare Kelvin will require.

“You don't realise how good people are until something happens to you,” Marie said. “We just want to thank everybody, anybody who was involved.”

It was the Saturday after this past June Bank Holiday when Kelvin’s mother, who is also named Marie, noticed Kelvin had developed a squint in his eye. Normally Kelvin was always on the go, but he was in bad form that day, his mother said. She brought him to the doctor and within two days the boy was diagnosed with a brain tumour.

News of the diagnosis “was such a shock to the family,” his grandmother, Marie, said. “It was so overwhelming - we could not believe how quickly it happened and how many people it affected - not just the immediate family, but the whole family.”

She described Kelvin as a character who was full of life. “He is always such a wonderful wean.”

Little Kelvin was transferred from Altnagelvin Hospital in Derry to the Royal Victoria Hospital in Belfast, where the following week he was in surgery for nearly 10 hours.

“There were prayers and Masses and bouquets going on that whole week,” Marie said. “Thank God he came out the other end.”

Kelvin was in hospital for more than a week but has since been recovering at home in Sion Mills, County Tyrone, with his parents, Gareth and Marie, and his brothers, Oisin, 14, and Odhran, 9. 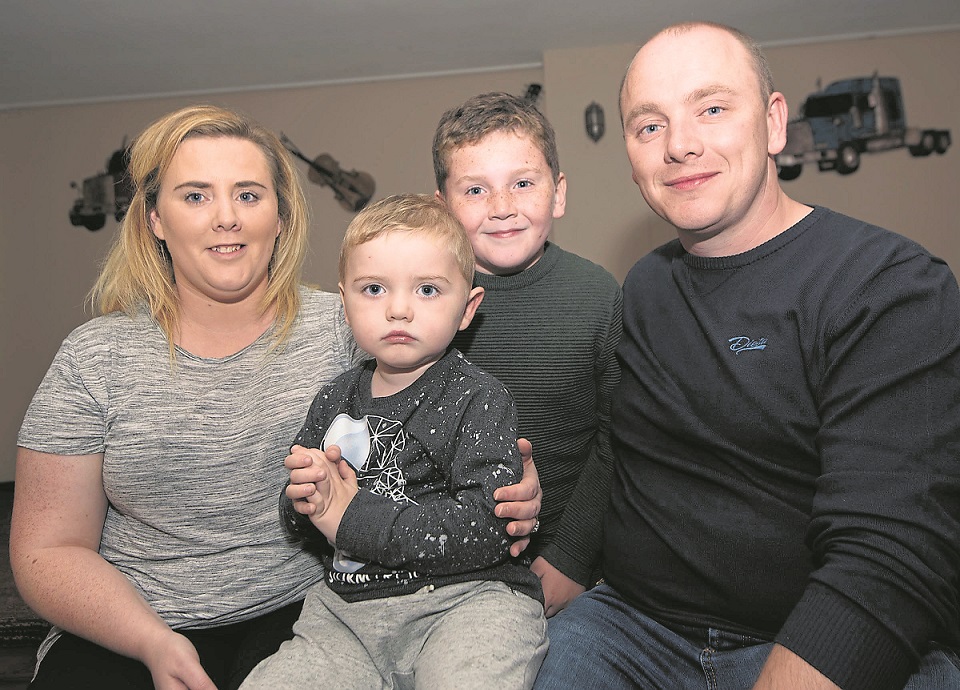 Kelvin Gibson, with his parents, Marie and Gareth, and his brother Odhran. Photo: Clive Wasson

The week after Kelvin’s surgery, his extended family was gathered together, when they thought they would hold a fundraiser in aid of the care Kelvin would require when he returned home.

“We didn’t even know where to start or what to do,” Kelvin’s grandmother Marie said. They were assisted by Tony Morning of Biddy Friel’s, and on July 21st they held a fundraising dance at the popular venue. Marie praised Tony Morning, his wife, Iris, and the staff, adding, “He’s so community-spirited - we’re not the first family they’ve helped around this area.”

Tommy Rosney, Sinead Black, Clement Clark, Paul McNichol and Malcolm Fisher were there, all giving their time and energy to have music on the night, Marie said. Businesses across the county donated so many prizes that they held an auction and a raffle.

“It was just amazing, the amount of people,” Marie said. “It was overwhelming, so it was.”

Sports stars Jason Quigley, Shay Given, Seamus Coleman donated personal items, and tops from the Donegal team and Celtic were among four they received.

There were some nights when the phone did not stop ringing, so many people were offering prizes.

“You'll not believe this - we got a pig for sale,” Marie said. “We ended up with a pig and a calf and a lamb, and hay and straw. We auctioned them all off.”

She said the family wanted to thank everybody who was involved.

“Masses were said all over the world for him,” she said, adding that the family had also received messages of support via text and social media from people they hadn’t heard from in some years.

She said the extended family - aunts and uncles, cousins, nieces and nephews - all got involved as well.

Wee Kelvin made an appearance on the night, too - the boy attended the fundraiser for about 10 minutes and it was very emotional, Marie recalled.

She said he is doing well. His eye remains a bit weak, but he’s good. She said doctors are pleased with his condition but will be checking on him regularly for the next 10 years.

Kelvin was just a 5-pound baby and has always been “a wee fighter”, Marie said.

“We always called him the wee warrior,” she said.

With Kelvin’s parents focused on their son, Gareth had been off work from Duffy’s Express Freight in Newtowncunningham and Marie is off work from Sheerin’s shop in Strabane. Their employers have been very, very good to them and very, very supportive, Kelvin’s grandmother Marie said.

“We just thank God every day now that we’ve got him, we still have him,” Marie said of her grandson. “He just lights up a room.

“See those big blue eyes of his? They’re just full of divilment,” she said.

Additional caption information for photo, above: Kevin, surrounded by family and friends involved in the fundraising event for his treatment being presented with a cheque for €15,005 that was raised at a function at Biddy Friel's of Drumoghill. Seated from left are Paddy O'Brien, Marie Gibson, Kelvin Gibson, Dohran Gibson, Gareth Gibson and Shirley Duddy. Photo: Clive Wasson