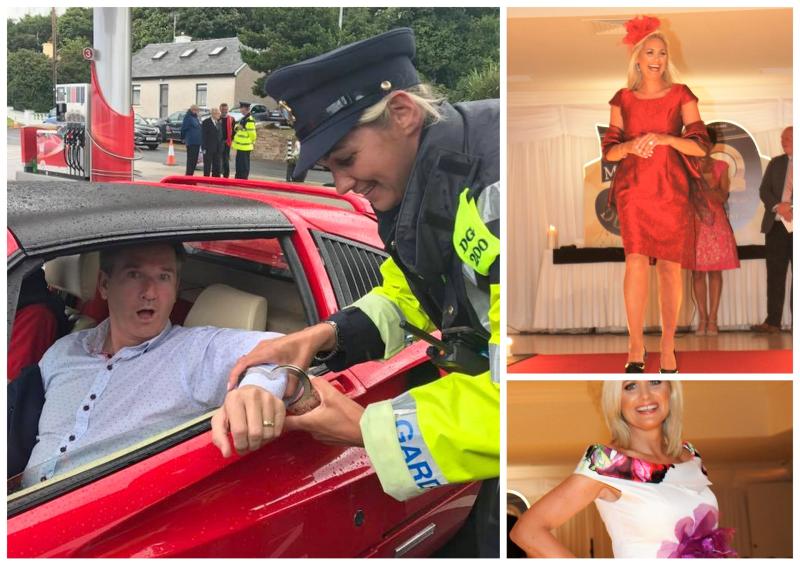 Garda Felicia Coll having a bit of fun with Daniel on Monday and on the catwalk at the big fashion night in Dungloe.

A garda who handcuffed Daniel O’Donnell in his Ferrari on Monday last took to the fashion catwalk last night in the Waterfront Hotel in Dungloe and indeed caused quite a stir.

Garda Felicia Coll, a strong Roscommon GAA supporter who is married to Tom Coll of Gweedore sprang quite a surprise on Daniel O'Donnell when he arrived at O’Donnell’s in Crolly last Monday and immediately put a halt to his gallop when she slapped the cuffs on him.

Of course it was all in jest but Felicia has since captured the attention of many having attracted thousands of views and hits on the Donegal Democrat's social media platforms.

As she took to the ramp last night she was nonplussed about it all - “Sure I was only doing my job and bringing a bit of a smile to the local community - that’s what community policing is all about - keeping in touch with your local community. It can have far reaching effects on crime prevention.”

Last night the fashion extravaganza at the Mary from Dungloe Festival showcased some superb outfits from Verve in Donegal Town in a show which delighted the packed banqueting suite with monies raised going to Leukemia research.