A pint cost a shilling when Crossroads, Killygordon publican Ben Browne started in the pub business. 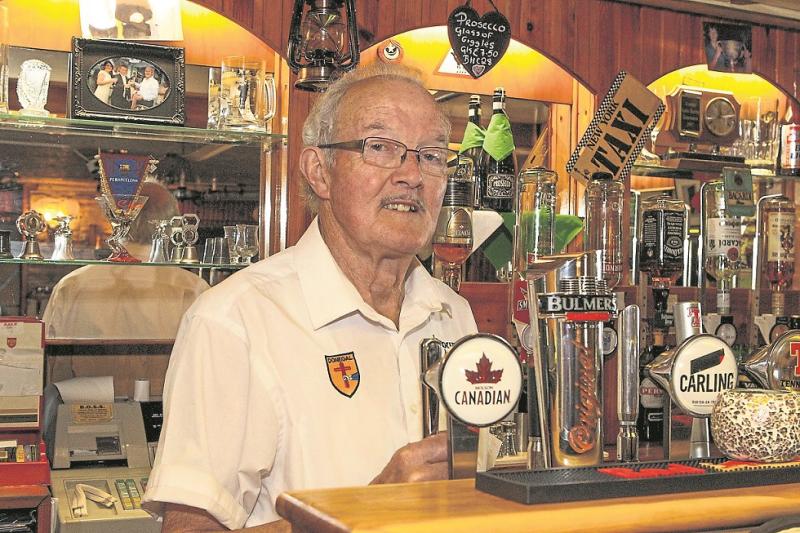 Behind the bar for the last 70 years and still going strong, Ben Browne, Photo Brian McDaid

A pint of stout cost a shilling and a bottle of beer was a little dearer and cost one shilling and threepence when Ben Browne started out in the pub business.

That was all of seventy years ago. You would have to fork out two shillings if you wanted a half of the dew of the barley.
That was back in 1947, and two years after Hitler had failed in his bid to rule the world.

Ben was 13 and just one month shy of his 14th birthday when he started in the family business, Browne’s of the Cross.

“My father Joe had worked in a pub in Letterkenny for a number of years. The pub was owned by a man of the name of Pat McLaughlin, and the pub was at the top of the Port Road, in Letterkenny,” explained Ben.

“He then moved to Derry for a number of years where he leased a pub and grocery shop, Gilmartin’s on Bishop Street, before he returned to the Cross and bought the old Barracks and set up a pub and grocery.

“My father was a native of the Cross and my mother was from the Rosses. Margaret O’Donnell was her name and she was from the Red House, Mullaghderg. She was a teacher and had come to work in the area.”

That was in the mid 1920s and a number of years later, in 1938, and Joe Browne purchased the current premises, that still houses the family business.

It was owned by the Kelly family and Joe Browne paid £1,200 for it at an auction, even though he had only £200 for a deposit.

Business was good from day one and he supplemented his income by supplying wild rabbits to the Dublin market.

This was during the Second World War and beef and port were rationed. Joe Browne took advantage and supplied the Dublin market with wild rabbit from Donegal.

The demand was so great and business was so brisk that Joe had his new pub paid for in 15 months.

Young Ben had been helping out in the pub from the age of eight with his main job corking Guinness and bottling beer after school.

“I remember it well. There were 500 bottles in a barrel. I started in the pub in September 1947, after I had spent a year in St Columb’s College in Derry, where I did very little but playing football.

“Back when I started, there was not the same selection of drinks that you have nowadays.

“Back in those years you had Smithwicks, Guinness, whiskey, gin, vodka, rum, port and sherry. Port and sherry was very popular with the ladies.

“We got a good name for Guinness and business was good in the ‘50s.

“The hall was built at the Cross in 1955 and there were dances in it every Sunday night, which was good for business.

“It took Guinness two weeks to mature in the bottles and I remember on one occasion bottling 1,300 bottles all in one go.

“Dan Gallen across the road was not well. He was a big age and the word was not good on him so I took a gamble and bottled 1,300 bottles.

“The bottles had just matured in time for Dan Gallen’s wake and I sold all 1,300 in a couple of days.” 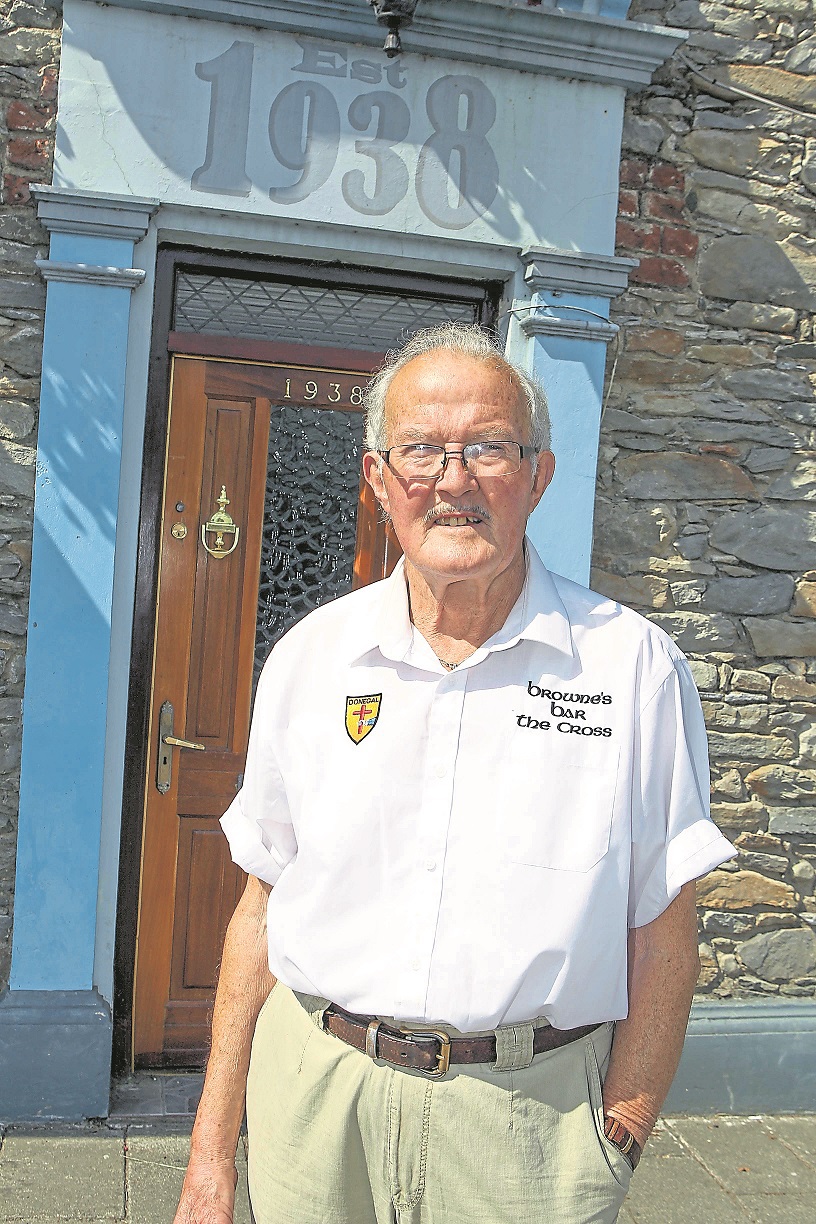 Ben got his first car in 1954 after his father initially refused to buy him one. “I was working long hours and the money wasn’t great, it was the least he could do. When he refused me I went down to Letterkenny and got some motorbike brochures.
“I threw them around the house in a few places where they would be seen.

“When my father saw them he said there is no motorbike coming around this house and he relented and that is how I got my first car.

“It was a black Morris Minor and the registration number was 1382 IH. I travelled to football games all over Ulster in it.”

Ben took over the running of the pub from his father in 1962, a year that was also a landmark year for Ben for another reason.

In 1962, he married Mary Bradley from Letterkenny. Mary was a telephonist in Dublin so they got married in the capital.

The wedding ceremony was in Glasnevin, in the north of the city and the reception was held in the Maples Hotel, on the Iona Road, also in Glasnevin. They were married by Maureen’s brother, Fr Joe Bradley.

“We were due to go to Benidorm on our honeymoon. But there was a plane crash around the same time so we didn’t go to Benidorm but went on a tour of Ireland instead."

Ben was Gaelic football mad (not so sure what Maureen thought of it) and they took in two provincial finals on their tour around the country.

By the time he was married, Ben was on his third car. He had traded the Morris Minor and had switched to Volkswagen and himself and Maureen headed off on honeymoon in his second Volkwagen Beetle.

Galway was the first stop on the honeymoon and as it happened it was Connacht final weekend and Ben and Maureen took in the meeting of Roscommon and Galway, won by Roscommon, on their first day of married life.

From Galway, they headed south to Kerry, and luckily for Maureen, the Munster final was over and Kerry were champions!

But you couldn’t go to Kerry and not come home without meeting at least one of the Kerry stars of the time.

“We did the ring of Kerry and visited Mick O’Dwyer, in Waterville. He was one of the Kerry stars of the time and of course later went on to become one of the greatest ever managers.

“He had a garage at the time and I had a great chat with him. We had planned to go out to Valencia Island to meet the great Mick O’Connell, but the weather wasn’t great and we couldn’t make the crossing.”

From Kerry, the newlyweds travelled back to Dublin and took in the Ulster final meeting of Cavan and Down, in Clones on the way home.

Changes in the pub business

The big change in the pub business in the ‘60 was the arrival of draft beer and Guinness available on tap. This signalled the end of the bottle business and also, by and large, ended the bottling of Guinness and beer.

Ben ended the 1960s by building a lounge onto the bar just in time for the singing lounge boom of the 1970s.

“The lounge really took off and we had music three nights a week, Friday, Saturday and Sunday. The ‘70s were the heyday for the singing lounge.

“We used to be packed every night with people coming from far and wide. The lounge was flying until Brendan Gamble, in Killygordon, installed a huge dance floor and the crowds flocked to Brendan’s place.

“We took a big hit at the time and it took us a few years to recover.”

By the time the 1980s came around Ben was reinventing Browne's at the Cross once again.

He once again renovated and started a ballad night once a week, on a Friday night.

“The ballad nights were a good success and were going well until the slump came in the middle of the ‘80s.

“We also ran a gala weekend, sheep shearing throwing the wellington and other sporting activities every summer for nine years in the ‘80s."

Ben and Maureen Browne had a family of seven, four boys - Joey, Louis, Stephen and Connor - and three girls - Anita, Bonnie and Elaine.

The ‘80s were an exciting time for the family and a number of good family nights were enjoyed in Kerry.

By the time the 1990s came around, Ben’s entrepreneurial skills came to the fore. And while he remained in the licensed trade, he began to diversify.

He built a pitch-and-putt course on a 14-acre site adjacent to the pub.

He is currently writing a book on alternative medicines which he hopes to have published for Christmas.

And he also turned inventor and designed a drainage machine suitable to drain playing surfaces and playing fields.

Benny turns 83 next October and himself and Maureen live over the pub at the Cross.

Ben still works in the bar and only on Sunday last, he clocked 16 hours behind the counter.

To mark his 70th anniversary in the licensed trade, he has planned a special weekend of celebrations this weekend, the August Bank Holiday weekend.