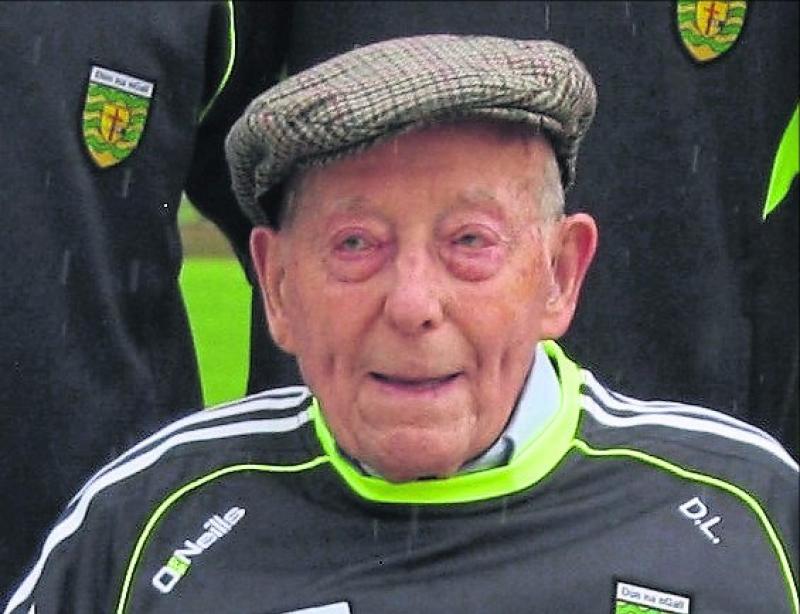 The sole survivor of the the first Donegal minor football team turns 100 today.
Leo McGinley, formerly of Umiskin, Kilcar, was corner-forward on the Donegal team as a 16-year-old when the county played Tyrone in the All-Ireland Minor Football Championship 83 years ago.
Donegal lost the 1934 game in Omagh by a point.
Leo, who lives outside Limerick, went on to play minor again the following year in what proved to be a controversial final. Donegal hammered Antrim 7-6 to 4-0 before losing to Tyrone in the final 2-2 to 2-1, Tyrone scoring a last minute goal, which came about when the Donegal ‘keeper James B Harvey was charged over the line.
Donegal lodged an objection to Tyrone player, James McVeigh, who they claimed had played for Pettigo in the Donegal Junior Championship earlier in 1935.

Objection upheld
Donegal’s objection was upheld and they went on to lose the All-Ireland semi-final in Croke Park to Tipperary by 3-3 to 2-3.
However, Tyrone counter objected, claiming four Donegal players were overage. Donegal did not defend, sending a telegram to the meeting stating “not defending.
And so the Ulster Minor Championship of 1935 was declared null and void.
Leo’s Gaelic career was cut short shortly after his minor career when he was the victim of the Ban when he was reported for attending a soccer game in Killybegs.
The two-year suspension saw McGinley playing for St. Catherine’s and he came to the notice of cross-channel scouts. “I was asked to join Southend, but I didn’t go. I came back to playing Gaelic after the suspension and I played for the county alongside (his elder brother) James Patrick.”

Nippy corner-forward
A nippy corner-forward, Leo says his biggest asset was his speed. “James Patrick used to play out around the centre field. You would find him anywhere. I was very fast. I used to jump up and time it well and hit the man’s hand.”
But Leo’s Gaelic career more or less ended when he emigrated to England in 1939. “We had the odd kick-about, but that was all. There were a few times when players gathered from different areas, players from other counties, Roscommon and Kerry,” said Leo, who hinted that there might have been overage players involved in the 1935 minor objection.

Leo was the youngest of a family of 12, six boys and six girls.
The mode of transport was walking and the bicycle. There were no collective training sessions, just a trial and then the games, explained Leo.

The mode of transport was walking and the bicycle. There were no collective training sessions, just a trial and then the games, explained Leo.
The McGinley family are noted for their longevity. A brother, Frank, lived until he was 103 and was a regular visitor from his home in Chicago, and he was driving up until his 100th year.
Asked about the present day style of football, Leo sums it up well. “It is becoming more like rugby,” he says.
Leo was in Croke Park for Donegal’s two All-Ireland wins and ironically was not at the final in 2014 when Donegal lost.
He came back to Limerick in 1950 and after 18 months branched out on his own with his own machinery. “I found that I could do it for myself,” says Leo, who retired in 1980. “I worked for the Council, Limerick County and Corporation, Clare Council and Tipperary.”

Trips to Kilcar
He enjoys his trips back to Kilcar and takes in the traditional music sessions most nights. In his early days he was part of a local group called The Melody Band, which played at dances.
His football legacy lives on both in Kilcar and in Limerick and even in Dublin. In Kilcar his grand nephews, Eamonn and Ciaran McGinley are regulars with Kilcar, while in Limerick, a grandchild, Emma Maguire, was captain of the Limerick Ladies in 2012 and 2013.
His son, Eamon, caught the rugby bug and after moving to Dublin, played outhalf for Bective Rangers for many years. Eamon's son, Eoghan (Leo's grandson) was a member of the Dublin U-21 panel a couple of years ago and plays his football with Skerries Harps.