€35,000 handed over to Red Cross for Donegal flood relief 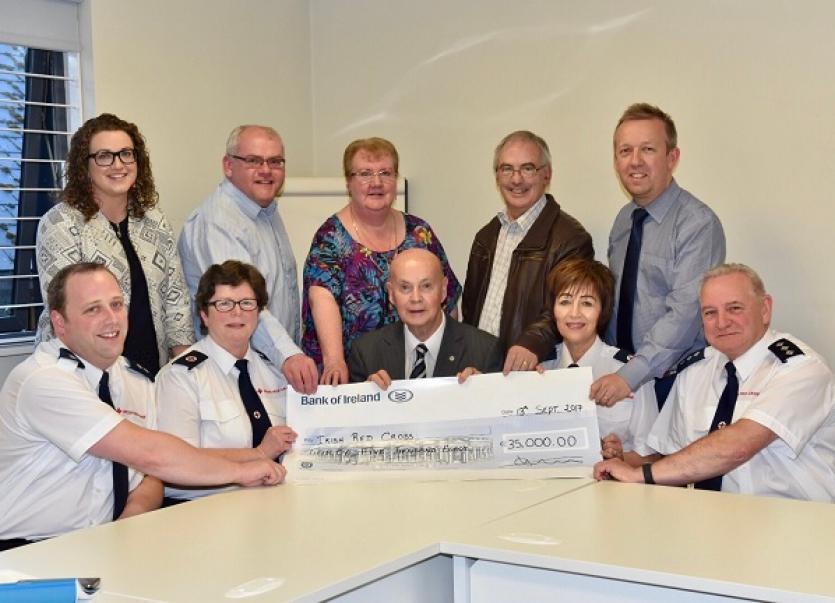 The first installment of money raised for the Irish Red Cross to assist the relief effort following the devastating floods in north Donegal in August was handed over to the charity group on Wednesday.

A cheque for €35,000, which was the majority of the proceeds of a charity concert held in Lettterkenny’s Aura Centre recently, which saw stars such as Daniel O’Donnell and Nathan Carter perform, was handed over to the Chairman of the Irish Red Cross, Pat Carey at a function Bank of Ireland, Letterkenny.
The event was set up by Deirdre Grant and a committee of volunteers over the course of six days.
Mrs Grant said some reported the event as the”six day miracle” and added that there was still more money to be collected from their fundraising efforts and this will be passed on in due course.
Speaking at the function she said it was a real team effort to host the concert but it was the goodwill of so many people that made it happen,
She said the event was “wonderful” and “madness” but was a great success.
“It is just amazing what you can do when you get a group of people to do something for the right reason, from the right place in their hearts and I think that is what we all did. It was a group of people. It was all volunteers. It was the people who came on the day and bought tickets. It was the like of McElhinney’s, John Foy and others who donated prizes for the raffle and the artist who performed. From the beginning it really took off when Daniel O’Donnell’s manager called me and said Daniel would like to be a part of it,” she explained.
She said the first installment was for €35,000 and there was more to come in from other collections and events being hosted around the country and further afield and this would be handed over later.
Pat Carey told those present that it was a great response from the people of Donegal and that the money raised would “make a hell of a difference” to the relief effort.
Daniel O’Donnell also joined the event via Skype and said he was delighted the event was so successful.
The star-studded bill at the Aura Leisure Centre included Daniel O’Donnell, Big Tom, Nathan Carter, Dominic and Barry Kirwan and Johnny Brady, among others.
The fundraising target for the event was €20,000 but the generosity of many saw that target exceeded.
Mrs Grant said there were even collections taking place in London to support those affected by the flooding.
The Donegal Association Dublin recently hosted a fundraising table quiz and social night in D2 on Harcourt Street for Inishowen Flood Relief. The event raised over €7,000.
Finín Mac a Bhaird was MC for the evening and spoke of how the Donegal Association were glad to be able to help and host an event for the victims of the recent floods in Donegal saying how this event brought the association back to its grassroots as it was originally founded as a result of a tragedy – The Aranmore Disaster in 1935
Donegal Person of the Year Stephen McCahill travelled from Ardara to be there on the night and spoke about the association and the importance of their work in Dublin.
Following on from the floods local farmers have called on the IFA to fight for as much financial aid as possible following the flooding which damaged land, crops, and roads, mostly in the Inishowen peninsula.
Special meeting
A special IFA meeting on Tuesday to deal with the flooding issue heard that the aid on offer - a package of €15,000 - would be inadequate for many farmers and some farmers would need substantial sums to deal with damage caused to their land by the flooding of August 22nd. Concern has also been raised by the IFA that damage to crops and uncut fodder and silage may not be covered.