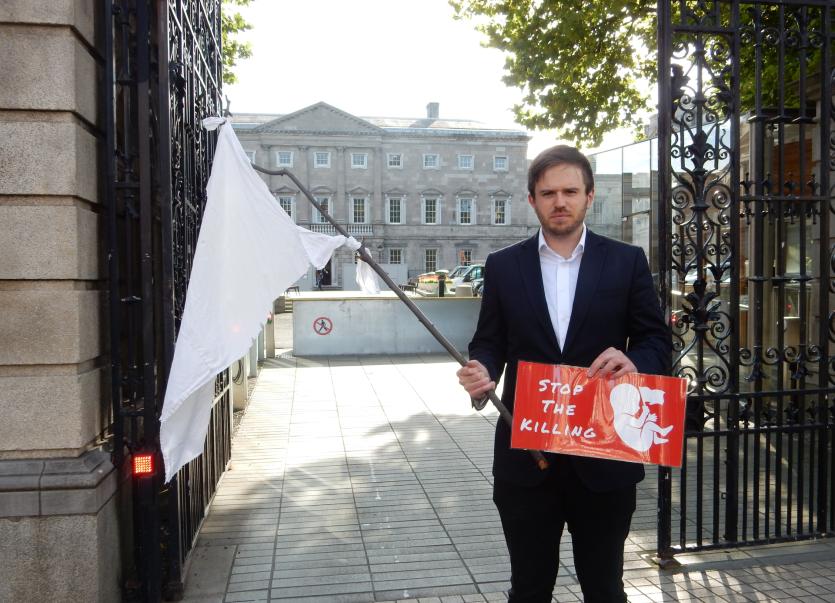 Tim Jackson outside the Dáil this morning where he has started a hunger strike.

A Donegal man has begun a hunger strike outside Dáil Eireann this morning, demanding that Taoiseach Leo Varadkar and members of the Oireachtas Committee on abortion watch a video of an abortion before discussing the referendum any further.

"I will just have to gauge how long I remain on hunger strike. I don't want the focus to be on me, it's much more important that people and the media focus on the issue I am raising here. This is not about the physical challenge of going on hunger strike, this is about a sense that our government is not listening to people on this issue. That's why I am doing this," he told the Democrat from outside Leinster House a short time ago.

Asked had he received much reaction, he replied: "There is already a lot of reaction on social media, I don't know what response this will get, but I feel it is important that I take this stance," he said.

In a statement he said he had written to Leo Varadkar and Senator Catherine Noone, chairwoman of the committee, last week requesting the group watch footage of the controversial procedure, but he states he did not receive a response.

The statement added: "Our leaders apparently don't want to face the ugly truth of how the child is killed, despite pushing for a repeal of the 8th Amendment."

He began this morning carrying a white flag which, he says, "calls for an end to the war on unwanted, unborn babies, 50 million of whom are killed every year."