Letterkenny national schools are “not in competition” - Scoil Cholmcille principal 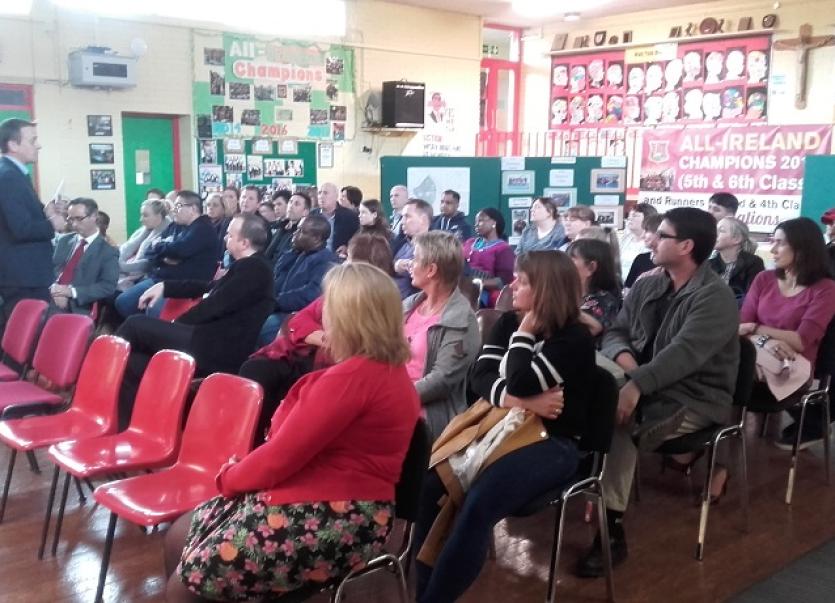 Parents and teachers at the meeting on Tuesday.

The principal of Scoil Cholmcille National School in Letterkenny said the proposal to make the currently all-boys school into a mixed co-educational system is not intended to force parents into deciding between it and the local all-girls national school.
Principal Paraig Cannon said his school is proposing a model where both schools could continue to “flourish”.
Mr Cannon stated: “The clear message that I would like to give out to the public is that we don’t want to be in competition with Scoil Mhuire Gan Smal. We do not want the two schools competing and we do not want parents to be in the awful dilemma, if we continue separate enrolment policies, that they are being faced with having to chose, and that is not fair on the parents. The mechanism that has worked in other schools is called a Managed Enrolment Policy that is approved by the Patron. The Patron would actually be guiding both schools in that going co-ed, both schools are ensured that infant intake would be for two classes in each school.”
If the school decided to go for a third class then that would be up to themselves, but at least there would be a selection criteria offer to parents to ensure both schools flourish and they are not being made to have to chose,” he said.
A large group of parents of children attending Scoil Cholmcille National School in Letterkenny met on Tuesday afternoon to learn more about a proposal to make the all-boys school a co-educational mixed school from next year onwards.
Mr Cannon explained: “It is a proposition. It is a proposal that we are considering enrolling girls into the school for September 2018.
See tomorrow’s edition of Donegal Democrat for the full story from the meeting.