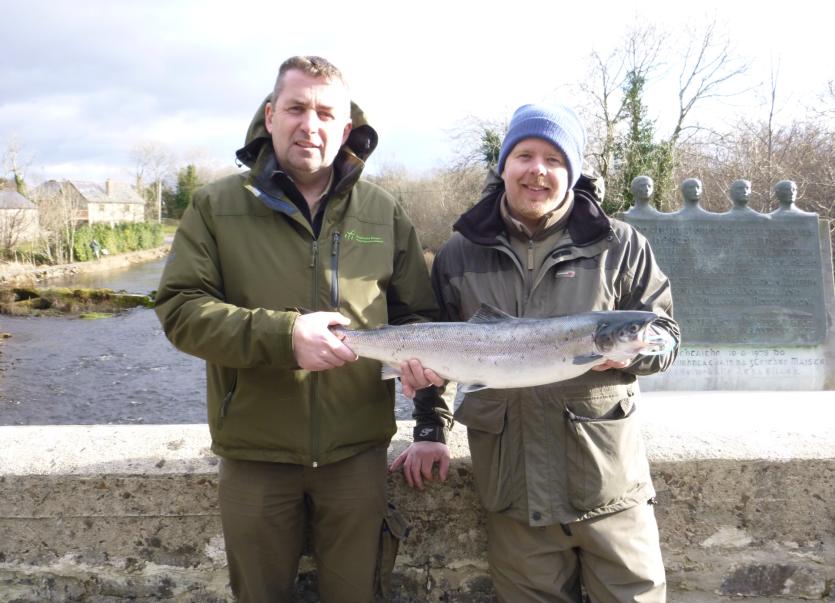 18 days into the new year and the wait continues for the first salmon of 2018 to be landed on the famous Drowes fishery near Kinlough in County Leitrim.

Weather conditions haven't helped, although on opening day there was one fish reportedly hooked, but not landed.
It seems the season is moving back more and more, some would say global warming is contributing to the delay in seeing the first fish landed.
As water temperatures rise salmon are having to go further north for the plankton feeding grounds off the Faeroe Islands and Greenland and that means they don't arrive to rivers like the Drowes as early in the year as they used to.
Two years ago the Leitrim river yielded its first salmon late in the month, last year a new record, of sorts, was set when the first salmon of the year wasn't caught until February 12th. That's the first time since records began that a salmon wasn't landed in January.
However, the good news is that there appears to be a bumper number of fish, known as Kelp, returning to the sea from the Drowes system having spawned and that's great for the future of the fish and the river.
“There's lots of Kelp in the river at the moment, that means there's great spawning and that is a real positive for the long term future of the fishery,” explained Shane Gallagher, Manager of the Drowes Fishery.

Runs of fish getting later

On the absence of a first salmon, Shane agrees there seems to be a change in the arrival or first run of salmon.
“Runs of fish are getting later, the sea is warming so the fish have to go further north to their feeding grounds and that means they arrive here later than before.”
On January 1st when the season opened they had up to 50 anglers on the river. Since then conditions have in the main not been favourable and this week is very unsuitable.
Other rivers and fisheries opened yesterday, Wednesday, so that may see a first salmon of the year caught elsewhere, but again, the recent bad weather makes the landing of a fish less likely on any river.
For now the hunt continues, but it may be a week or more before someone lands the first salmon of the year on the Drowse.