Pat's Patch: If we don't fight for services in Donegal, who will?

"It seems pretty evident to me if the people of this county aren't willing to get off their backsides and fight for proper services why should anyone else be worried about fighting for us?" 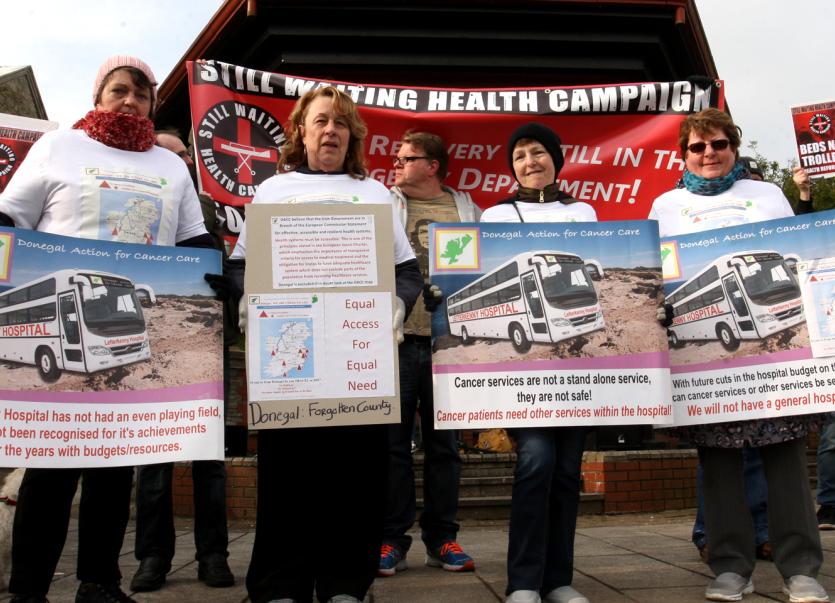 Members of 'The Still Waiting Health Campaign' protesting In Letterkenny on Saturday.

I went on the 'Still Waiting' march in Letterkenny on Saturday. It was organised to highlight the awful health services in Donegal.
To be honest, I was more than a little disappointed at the turnout. Where there should have been tens of thousands, as I had anticipated, there were several hundred.
It seems pretty evident to me if the people of this county aren't willing to get off their backsides and fight for proper services why should anyone else be worried about fighting for us? And, let me assure you, the overwhelming evidence is that they aren't. If they were, we wouldn't be putting up with the kind of Third World service that is failing so many people in Donegal, including many with cancer.
It's not an exaggeration to say the daily lives of many people in our county is one of pain and suffering. Those attending the march were told there were almost 5,000 people denied a bed in Letterkenny University Hospital last year. 10,000-plus people are on waiting lists.
Our main hospital is the sixth largest hospital in the country yet it's near the top of the list in terms of underfunding.
And, of course, if you have serious cancer or heart problems you are off to Galway or Dublin for an uncomfortable four-hour journey in the back of an ambulance. Those are the facts.
Quite a few of the speakers made the point too that this is a non-political issue, but it seems the main political parties - namely Fianna Fail and Fine Gael - never attend or send representatives to marches like this. Why? Do only left-wingers feel the need or obligation to protest?
Speaking personally, I don't care who a march to highlight disparity or unfairness in society. Surely the provision of proper health care facilities and services for decent, people who pay their taxes the same as everyone else is a universal issue that's above party politics.
Or does that last sentence need a question mark nowadays?

Diesel don'ts
When I was buying my car I traveled around half the garages in the county.
At each and every one I was told time and time again that a diesel was the best value, that you might pay a little more on price than the equivalent petrol model but you would soon save that in terms of better mileage on the road.
Now it seems, according to a report last week, the government is planning a full frontal assault on diesel car owners including increasing motor tax on diesel vehicles. This is an act of gross bad faith. They encouraged purchasers for years to buy diesel now they are going to punish them for doing so.
Hardly seems fair.

As regular readers will know I find the almost total lack of criticism of the EU in our society, but particularly in our mainstream media, distinctly odd.
Not only is there a massive democratic deficit in the EU - remember my old , the German Finance Minister, Mr. Schauble telling the Greeks election results 'meant nothing'? - but now not only has little Ireland picked up 42% of the tab for the EU bank but we are also now a net contributor to Europe.
Let me explain: we joined the union in 1973 and got some EU funding but, since 2014, we have been a net contributor, meaning the country sends more money to Brussels than it receives back in benefits and payments.
In 2016, for example, we paid in just over €2 billion and in return registered €1.6 billion in public sector receipts. This left Ireland just over €244 million in the red - a more-than ten-fold increase the net loss for 2015.
And it's going to get a lot worse after Brexit when 'contributor' countries will be expected to share the burden of filling the gap left by the British.
And no one is asking if the EU is still a great deal?

I can't remember the exact details of the case but on the news last week it was stated that a guy who had more than a hundred previous convictions had been granted free legal aid for his latest trial.
I don't know about you but I think that really is taking the piss out of the system.
In my opinion, if you have 100 previous convictions you forfeit the right to avail of a service that was originally introduced to help people who genuinely were in need of legal representation but couldn't afford it.

There was a psychologist on RTÉ the other day who warned children under two should not be allowed any electronic devices such as phones, tablets or iPads as latest research is showing children's fine motor skills, their sight and cognitive development are being seriously impaired.
All children, in general, should, apparently, have restrictions in regard to usage as yer man claimed that overuse is impacting on their physical and mental health.
We have to accept that this generation and generations to come will be surrounded by ever-increasing technology but parents need to be both responsible with and responsible for their children, Surely we don't need a psychologist to tell us this basic fact.

And finally
At the 'Still Waiting' gathering at the Market Square on Saturday I heard someone with a beautiful voice. I thought at first it was a record as I couldn't see anyone, but then someone told me that it was a local girl by the name - I hope I have got it right - Shauna McDaid.
She was way at the back of the stage hence my failure to notice her.
Best voice I have heard in years.
Absolutely beautiful.