Appeal for involvement in community action plan on alcohol 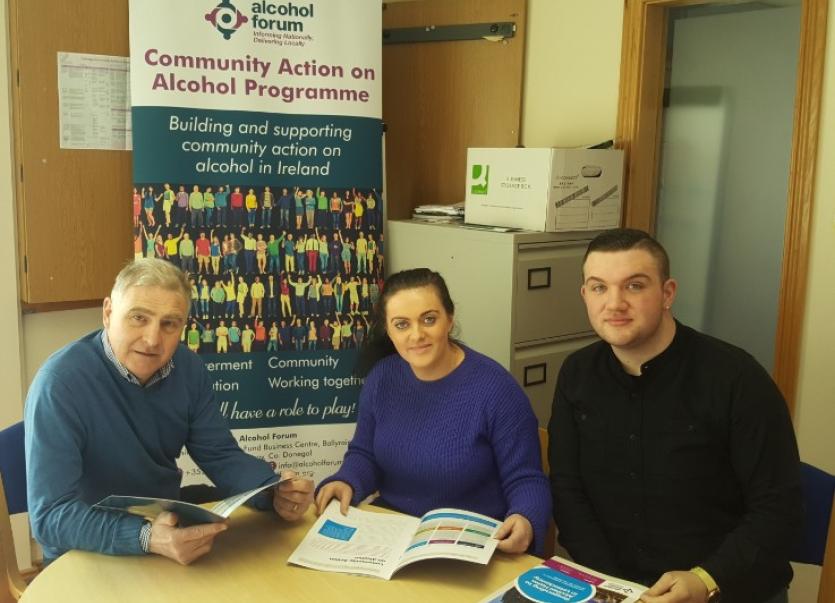 Kieran Doherty, Aine Hanlon and David Friel review ‘Responding to the Alcohol Harm in Letterkenny’ report ahead of Wednesday’s meeting.

Residents and groups in Letterkenny are being invited by the Alcohol Forum to attend a meeting in the Public Services Centre this week to get involved in developing the local community action plan on alcohol.

Letterkenny will become the twentieth town in Ireland to develop a comprehensive community plan on alcohol with the support of the Alcohol Forum, which has been leading out on the National Community Action on Alcohol Programme since 2015.

Kieran Doherty, CEO of the Alcohol Forum has welcomed the development of community action in Letterkenny.

“Sligo just last week launched its Sligo City Alcohol Strategy, which was the first town in the North West to develop a plan and we are delighted to be working locally with a wide range of groups to develop a plan here in Letterkenny,” he said.

The public meeting, which takes place this Wednesday at 2pm in the Public Services Centre,   is part of an ongoing consultation and engagement process that has been ongoing over the past year.

Paula Leonard, the National Lead for Community Action on Alcohol, gives some background on the process, said:  “So far, we’ve had two meetings and back in January, we delivered three days of training around alcohol and community action with 25 people from local groups participating.

“But this process isn’t just about alcohol, it’s also very much about community, local leadership and bringing people together to work on an issue of common concern.   We’ve had incredible interest and support so far with a really diverse range of people and organisations becoming involved from across the community, representing new communities, LGBTI groups, young people and we’ve also had a lot of support from state agencies including Donegal County Council, the gardaí and the HSE.”

This meeting is about widening the conversation and getting more people involved, she added.

“Here in Ireland, we’ve all been impacted by alcohol harm one way or another.  It may have been a family member, a friend, a partner or as children we may have experienced the harmful effects of a parent’s drinking.  The meeting on Wednesday is an invitation to everyone to come along, hear about what has been happening and give their own ideas about what needs to be included in our plan.”

Activities over the past number of months have been supported by the Donegal Local Community Development Committee through the Healthy Ireland Fund.   This has included consultations with parents and youth workers around the development of a guide on alcohol and brain health and also the three-day training programme on community action on alcohol.

The meeting takes place in the Public Services Centre this coming Wednesday, March 28th from 2pm to 4pm.