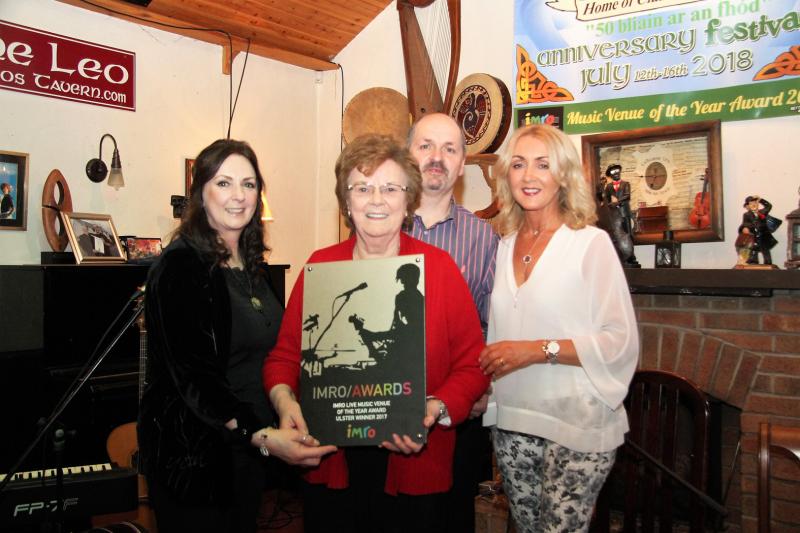 An IMRO award for the Best Live Music Venue at Leo's. Moya Brennan along with her moher Baba, brother Bartley and his wife Mary Ferry. INDD 080418 Leo 1 MVB

Last night (Saturday) Meenaleck was very much alive to the sound of music when the acclaimed Moya Brennan announced details of a festival which will see some of the most respected artists coming to the heart of the Rosses in mid July.

Indeed it was a night of many celebrations in Leo’s Tavern as Moya told The Democrat, “We are celebrating 50 years in business in Leo’s this years, our award as Best Live Music venue and 30 years on the road as a band.

“My late father used to tell me that when himself and my mother Baba decided to buy the pub in 1967 and announced that he was going to set up a singing pub, the reaction was “Sure, who in God’s name would be coming here to this part of the world - that was 50 years ago and there have been just so many people coming through the doors.

“He just loved his music and loved to entertain and Leo’s was his own stage - his followed through to us all as a family and there’s nothing we like better than all joining together for a session like tonight.”

Moya announced the details of the festival which commences on July 12 running through to the 16th. The five day weekend will celebrate Leo’s heritage, his family legacy and he enduring power of music in west Donegal.

Moya added, “There will be performances by the original Clannad, Hazel O’Connor. Donovan and then myself and our very own Daniel and all finishing up with a massive ceili and session.

“My father often told the story that one night he had Margo playing in the pub and she brought this young fella a long who sat up close to the stage taking everything in. Margo eventually asked him up on the stage and he gave a great performance. That young fella was Daniel. Da said at the time, 'Keep your eye out for that della, he’ll go far'."

Moya added, “We are putting in a top class marquee around the back of Leo’s for the duration but I would warn that even though we are only officially launching it today tickets will be very limited as the marquee can only hold 250 people.

“It’s going to be one of those great festivals and you just don’t know how might drop in the door - a weekend of a lot of surprises.”

Tickets for Leo’s 50th Anniversary Festival events are available online and in person from Leo’s Tavern.