Almost 1,000 people in catchment cross the border to Derry for work 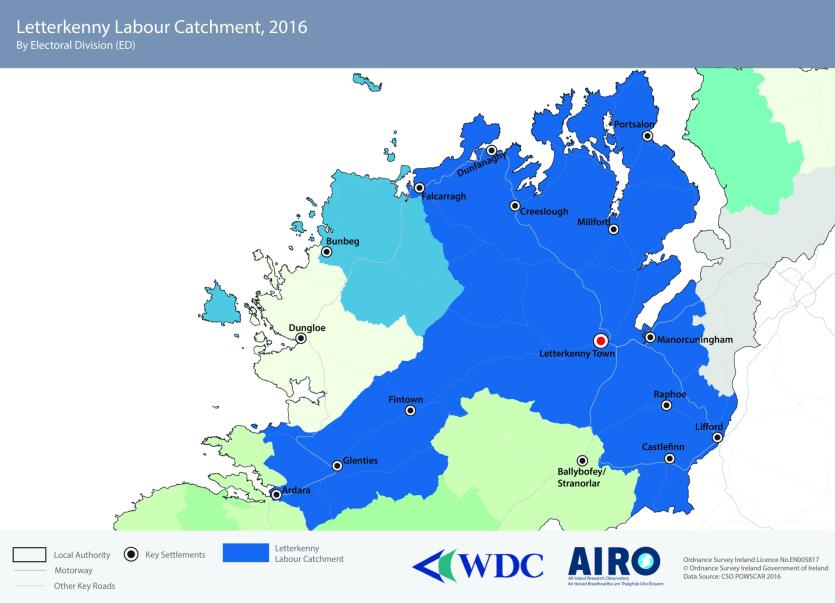 The numbers of people employed in Letterkenny labour catchment increased by 10% in the last ten years, a new report shows.

The report also highlights potential implications of Brexit as a large number of people based in the town work in Derry.

This is one of the findings of the new report carried out by the Western Development Commission (WDC), which has carried out in-depth research into the commuting patterns of those at work in the Western Region.

This highlights the greater labour supply available beyond the immediate town boundary.

The Letterkenny town labour catchment covers a large area but is completely confined to within County Donegal.

Deirdre Frost, Policy Analyst at the WDC noted: “This is significant in the context of the recently published Project Ireland 2040, where urban centres such as Letterkenny will be expected to grow in importance. The forthcoming Regional Economic and Spatial Strategies will have to set out plans to support greater growth in urban centres and employment growth is central to this.”

Within Donegal there are also a number of other distinct labour catchments such as Dungloe, Bunbeg and Ballybofey/Stranorlar. Derry also has a major influence on the north-east of the county.

The age profile of those living in the Letterkenny town labour catchment is the youngest of the catchments of the seven county towns in the Western Region.

Those at work and living in the Letterkenny town labour catchment have a much lower level of education than the State average – with rates of 51.6% and 56.1% respectively (third level). However, those employed in Letterkenny town have a higher rate of third level education of 57.3%.

Within the Letterkenny town labour catchment the single largest employer is the ‘Education, Human Health and Social Work’ sector and accounts for 29.3% (5,779) which is much higher than the State average (22.8%).

‘Manufacturing Industries’ (8.1% or 1,601) is the fourth most important sector although significantly lower than the State average of 13%.

Commenting on the findings, the Chairperson of the WDC, Dr. Deirdre Garvey said:

“This is very valuable information as it provides robust analysis of travel to work patterns in centres such as Letterkenny. Comparing these data with the original WDC analysis 10 years earlier provides insights into trends. It will be of particular value to policy-makers in the context of Project Ireland 2040 and the development of the Regional Spatial and Economic Strategies informing decisions on commuting patterns and enterprise location”.