Recovered from a stroke, Larry felt others needed support 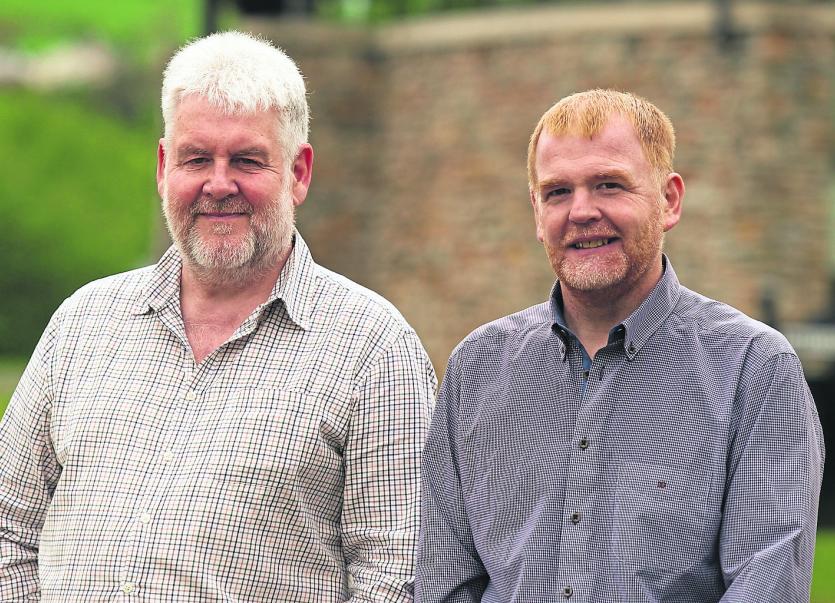 Larry Masterson and Shaun Wilson who both suffered strokes and are now part of the group to help people like themselves in the recovery through conversation. Photo: Brian McDaid

The first thing you should do is call your GP and tell her that she probably saved your life,” were the first words uttered to Larry Masterson by his cardiac consultant.
That was three years ago and now three years on, Larry who is 61, has undergone major heart surgery, suffered a stroke and most important of all he has made a full recovery.
He also has set up a support group for stroke survivors called Different Strokes for Different Folks which is still in its infancy and which he is currently promoting.
Larry is a native of Buncrana but now lives in Mountcharles. Larry, who worked in the Health Service as a social worker for 35 years with the North Western Health Board and the HSE North West, would be well known across the county.
His own personal ‘health’ story resulted from a visit to his local GP.
Larry explains: “I went to the doctor with what I thought was a bad cold, but it turned out to be much more serious.
“After examining me, the doctor asked me how long was it since I had my last ‘MOT’ - health check.
“I told her it was six months.
“She said to me there is something not right. I think you have a heart murmur and asked me would I have any problem with going for a second opinion and seeing a consultant.
“I said I didn’t and the appointment was made. I met the consultant and after carrying out tests on me the first words he told me ‘you should call your GP and thank her because she probably has saved your life’.”

Blocked valve
The consultant went on to tell Larry that he had a blocked valve and that he needed to have open heart surgery. He had the surgery in the Mater Hospital in Dublin and everything went well and the operation was a success.
But, two weeks into his recovery, Larry suffered a life-changing event, a stroke.
“I was in hospital for heart surgery. My valve had collapsed. I was on the table for eight hours and I came out of all that. I had a piece of steel put into the valve.
“In hospital there are about four stages before you get home and at the last stage, which is about two weeks in, I woke up and I knew no one and I didn’t know who I was, or where I was.
“I didn’t know my own wife, I knew no one.
“I had suffered a stroke; a clot had moved up into my brain. But thankfully, I was in the right place and I stayed in hospital for a couple of more weeks.
“My limbs and my speech were affected. But I was lucky because after a week and a half I had almost a full recovery but it took my speech a while longer to come back.
“I still have some communication and memory problems, but that is coming back too.”

Speech therapist
Larry attended a speech therapist and he also attended Community Neurological Rehab Team (CNRT) in Ballybofey, run by the HSE, which he credits along with his wife Winifred and son Patrick for his recovery.
“Being truthful, if I hadn’t attended the CNRT, I wouldn’t have got through it. They were simply brilliant and but for them and the support I received from Winifred and Patrick, I don’t think I would be here today talking to you.” A short time into his recovery Larry began to look around for support to help with his recovery programme. But he soon discovered there was no such group or no such support. Stroke survivors, once they complete their rehab are effectively left to their own devices and their own family support group.
It was then that Larry began to think about setting up a support group especially for strokes survivors.
“I felt there was nobody else around me going through the recovery programme and I thought, wouldn’t it be great if we had a group of people just to talk too and communicate with.
“I looked for it and it wasn’t there so, along with fellow survivors Kathleen O’Donnell and Neil Sweeney, who were in the CNRT, they helped set up Different Strokes for Different Folks. It’s very much a collective effort and I want to underline that point.
“We are a year in operation and we have monthly meetings in the Silver Tassie Hotel, outside Letterkenny. The meetings are on the last Wednesday of the month from 11am to 1 pm and we have a guest speaker who comes in and does a presentation on all sorts of topics from exercise to diet and all kinds of life experiences and topics.
“I’m grateful to the Donegal Democrat for taking an interest in our group and this interview today, will, I hope, help spread the world and let people know there is help out there.”