IT OCCURS TO ME: In praise of the 'Schemozzle'

It's a word we think is one of our own 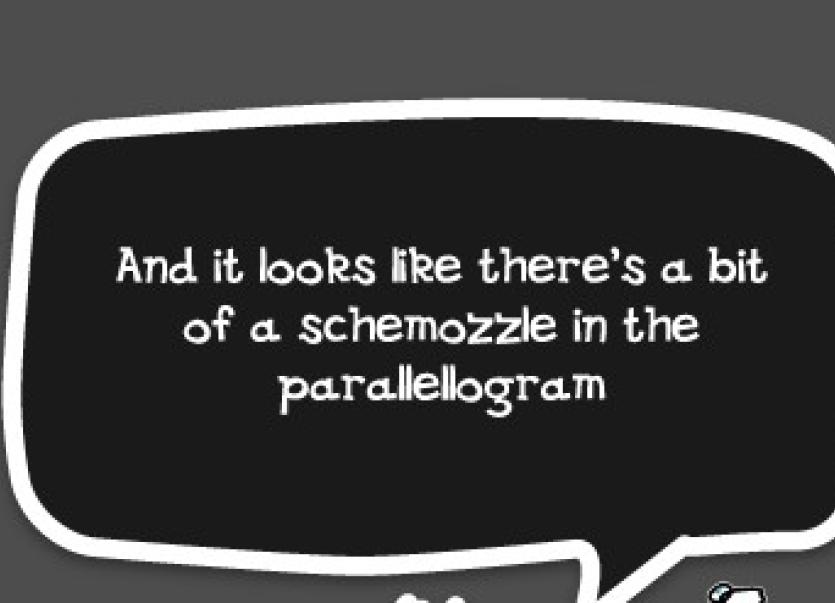 I see where someone described the ructions in Tirconaill Park between Four Masters and Bundoran as a ‘schemozzle’, a word so often used in Ireland that we think it’s one of our own.
In fact, it’s of Hebrew origin...from the Yiddish “shlim mazel”.... “rotten luck”.
A Rabbi once explained it thus: “A shlemiel is the fellow who climbs to the top of a ladder with a bucket of paint and then drops it. A shimazl is the fellow on whose head the bucket falls.”
Mmmmm? The Tirconaill Park incident may be blown out of all proportion by sections of the southern media who like nothing better than portraying Ulster football as something akin to 15 Spartacuses kicking the assacuses of 15 others! Meanwhile, in Kerry, the Kingdom where only purity is manifest on the manly fields, hurling referee Fergal Horgan was jostled after a hectic ending to the Senior Hurling Final between Lixnaw and Kilmoyley.
Kilmoyley were given an injury-time penalty which would have won the final, with Horgan informing the taker, Daniel Collins that he would have to score direct.
The penalty was actually saved by Martin Stackpoole and although it ended up in the net, it was correctly disallowed as Collins had been told he had to to score directly.
Kilmoyley players and officials surrounded the referee and he appeared to be struck in what one newspaper called ‘a commotion’ before Gardaí and stewards ensured the referee's safe passage from the pitch. Hurling in Kerry? It seems as alien as cricket in Dungiven.
But…’a commotion’! I’m surprised it wasn’t referred to as ‘handbags’, but until men start wearing them, it is probably considered a sexist remark.
Anyway, up here we’ll stick with an oul schemozzle, as it has a kind of harmless connotation...you don’t associate it with the blue lights of ambulances or the Guards....not that the chap with the bucket on his head would agree.
Rotten luck...old chap!

JOHN MCCAIN: AN HONOURABLE MAN
The praise for Senator John McCain has been universal, in contrast with Trump’s begrudging tweet and no statement from the White House in the hours after his death.
When McCain, then a naval aviator, was badly injured in a crash in 1967, and subsequently captured by the North Vietnamese, he was held for five years and tortured. He stubbornly refused opportunities to be released for propaganda purposes.
Two years ago, Presidential candidate Trump railed at a campaign event in Iowa: “He’s not a war hero. He’s a war hero because he was captured? I like people who weren’t captured”.
McCain had his revenge in due course, albeit without referring to the President by name: “One aspect of the conflict, by the way, that I will never, ever countenance is that we drafted the lowest income level of America and the highest income level found a doctor that would say they had a bone spur. That is wrong. That is wrong. If we are going to ask every American to serve, every American should serve.”
Donald Trump received five deferments from service in Vietnam: four for academic reasons and one for bone spurs – calcium buildups – in his heels.
In 2015, he said at a news conference he couldn’t remember which heel the bone spurs had affected. His campaign said it was both.
In July 2016, he told the New York Times: “I had a doctor that gave me a letter – a very strong letter on the heels.” The problem had been “temporary” and “minor”, he said, adding: “Over a period of time, it healed up.” He then managed to mangle the English language without a trace of irony: “You know, it was difficult from the long-term walking standpoint.”
When Senator McCain accepted the Liberty Medal in Philadelphia,he gave other remarks that were interpreted as an attack on Trump. He criticised “half-baked, spurious nationalism cooked up by people who would rather find scapegoats than solve problems” and added “We live in a land made of ideals, not blood and soil.”
In response, Trump told a radio host: “People have to be careful because I fight back. I’m being very nice, very nice, but at some point I will fight back and it won’t be pretty.”
McCain replied: “It’s fine with me. I’ve faced some fairly significant adversaries in the past.”
Watching Trump’s attempts to destroy decency and democracy must have seemed like a second bout of torture to this most honourable of men. Whatever about calcium deficiency in the heels, Trump seems to have developed a unique form of ‘brain spurs’.
Unsurprisingly, he has not been invited to deliver an oration at the McCain funeral. Former Presidents Bush and Obama will do the honours. THE CURSE OF VULTURE FUNDS
It’s less than two years ago since Councillor Cian Prendiville was fighting the corner of those being evicted from a Limerick hotel sold by NAMA to a US vulture fund. At the time he claimed that it was Michael Noonan who “rolled out the red carpet for these vulture funds, meeting with their representative personally eight times in 2013 and 2014 encouraging them to come to Ireland”.
Their methodology was summed up as “the Three Rs”: receiverships, rental hikes and repossessions, “buy big, buy cheap and want a quick profit”.
According to one businessman, who had unsatisfactory dealings with vulture funds, “…you’re trying to deal with someone who doesn’t want a solution”. Their letters are “aggressive and hostile”.
They’re circling again.