Gary and Mairead Anderson through to All-Ireland Chowder Cook-Off. 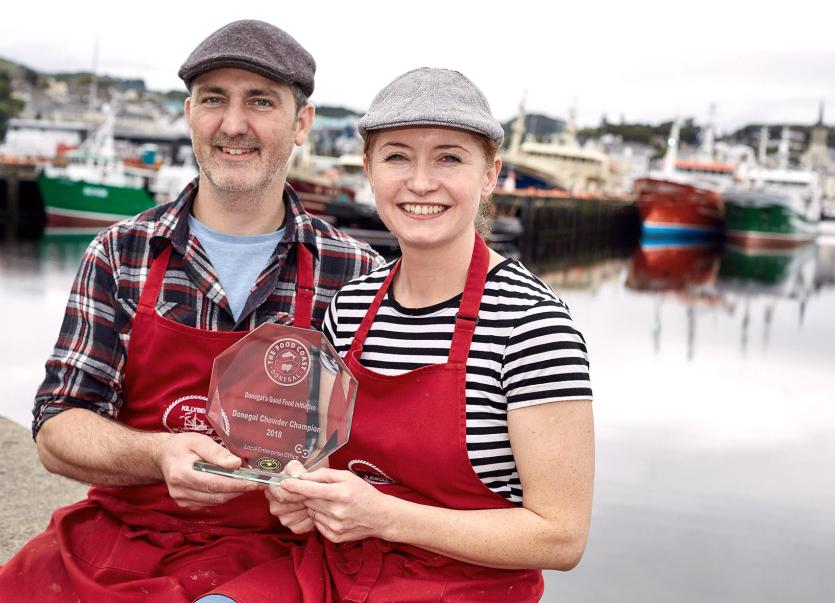 Killybegs couple Gary and Mairead Anderson of the Killybegs Seafood Shack are now proud holders of the title of best Seafood Chowder in Donegal, after a record number of voters chose their chowder at the annual Hooked Fesitival in Killybegs last week.

With ten businesses competing for the title, competition was always going to be tough as each business tried to impress members of the public who were the ultimate judges on the day.

In the end over 600 votes were cast, with the Seafood Shack’s recipe getting the nod over the other amazingly high-quality entries.

The win means that Gary and Mairead will now head to Kinsale in 2019 to represent Donegal in the All-Ireland Chowder Cook-Off.

A delighted Mairead Anderson said they were thrilled to have won.

“We are absolutely delighted to have won the competition and we are really looking forward representing Killybegs and Donegal in the All Ireland chowder competition in Kinsale next year.”

The Donegal Chowder competition is organised by Local Enterprise Donegal through the Food Coast – the good food initiative – and Mairead was extremely grateful to them for all their hard work in helping to organise the contest.

“I’d have to say a huge well done to the Local Enterprise Office,  Donegal County Council and Killybegs Community Council for organising an amazing event and thank you to Eve Ann McCarron in particular, who made sure we had everything we needed on the day.”

Michael Tunney, Head of Enterprise in Donegal says The Food Coast is about helping businesses work together to highlight the developing food culture in the county.

“The Food Coast Initiative gives new and existing food businesses in Donegal the opportunity to connect with fellow businesses while building the profile of Donegal. The ambition for the Local Enterprise Office is to encourage new food start-ups and the development of established businesses."

He added that for anyone working in a food related business in the county, the Food Coast encourages businesses to collaborate and work towards a common goal of making Donegal famous for good food.

“Events like the Donegal Chowder Cook-Off are great fun, but they also have a serious role to play in helping us share Donegal’s food story with a wider audience. Year on year the competition gets tougher and the public interest has grown following previous Donegal successes on both the national and international stage.”

While Gary and Mairead will have their sights set on the All-Ireland in Kinsale next year, Mr. Tunney urged Donegal businesses to keep next year’s Donegal competition in mind.