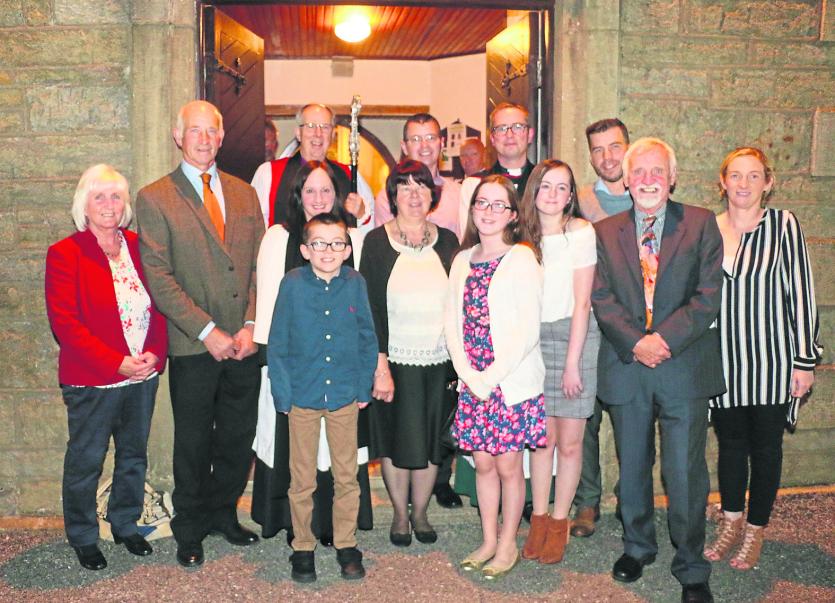 The Rt. Revd. Bishop Ken Good and Archdeacon David Huss along with family members of the Revd. Lindesy Farrell in Inver

Members of the Grouped Parishes of Inver, Mountcharles, Killaghtee and Killybegs got a first opportunity to meet their new Curate since her ordination, last weekend, when Rev Lindsey Farrell was introduced formally to parishioners at a Service in St John’s Church in Inver on Tuesday evening.
The church was filled to capacity for the Service of Introduction, which was led by the Bishop of Derry and Raphoe, Rt Rev Ken Good, and attended by Church of Ireland clergy from throughout the Diocese of Raphoe, many representatives of other Christian denominations in south Donegal and local politicians. Also in the congregation were Rev Farrell’s husband, Keith, their three children and all four of the children’s grandparents.

The sermon was preached by the Rector of Drumholm, Kilbarron and Rossnowlagh, Rev Canon Brian Russell.
Following the Service, those present made their way to Doorin Hall, just over half a mile away, for supper and speeches.
Among those who addressed the gathering was the Rector of Rossorry, Rev Canon Dr Ian Ellis.
A presentation was made to Rev Canon John Deane and his wife Heather for their work in the Inver Group during the vacancy, and the Archdeacon of Raphoe, Ven. David Huss, and Canon Russell were thanked and congratulated for organising the Service of Introduction.