PAT'S PATCH: An amazing old man and the GAA

Time to give credit where credit's due 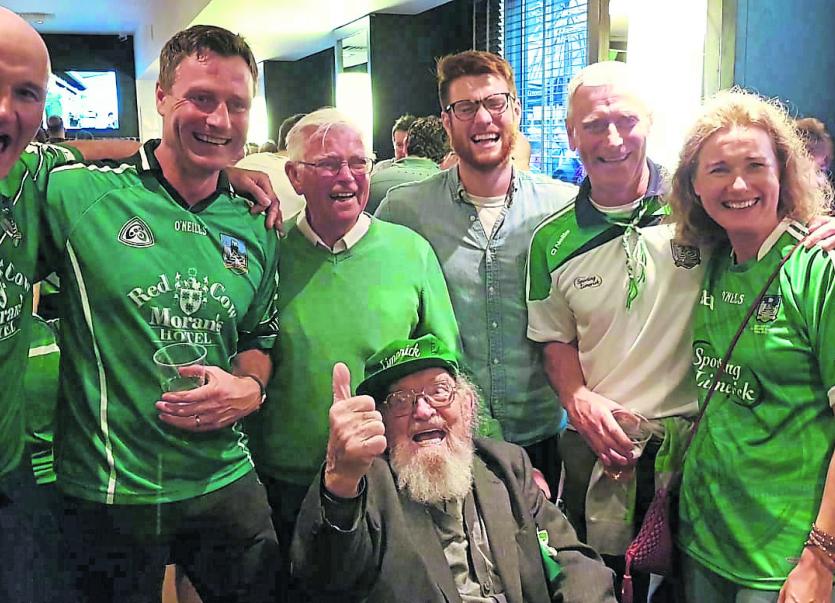 I saw a photo of him in one of the papers after Limerick’s victory in the All Ireland hurling final. An old man with a grey beard and Donald Trump style hat, only his didn’t have the ‘Make America Great Again’ logo but simply said ‘Limerick’.
I wondered at the time who he was and what was his story. I found the answers to both questions on Friday night on the Late Late Show.
98-year-old John Hunt emigrated to America in the 1940’s and settled in Chicago. He has lived there ever since. But when Limerick got through to the All-Ireland, despite his advanced age, and despite being in a wheelchair, he had to get back to his native land to see it. That’s how much it meant to him.

SEE ALSO: GAA referee locked in dressing room for his own safety

After the victory he told an 'Irish Examiner' reporter: “It is very hard to tell you how I feel right now. It is out of this world. It is the greatest thrill that I have had for many many years. I was thrilled with every minute of the game.”
What was remarkable was that Hunt has been a participant, if that’s the right word, in a remarkable treble: in 1936 he saw Limerick win, in 1973 he came back from America to witness another victory, and then he had to wait another 45 years for the hat-trick in 2018. An epic 82 year span from the first to the last.
What is also remarkable is that despite his life time away from Limerick and Ireland, instead of diminishing, his love for the GAA in general, and hurling in particular, has grown and prospered. He was a founding member of the Chicago Hurling Club and has been active in promoting Gaelic games right across the States for almost 70 years.
And this brings me to another story about the GAA. Some months ago I came across an article by the noted media pundit and former Derry star forward, Joe Brolly where he told of going to a community function in Ballerin in Co. Derry to honour the memory of young Shaun Mullin, the captain of the senior football team there who died after being in collision with a van while out for his early morning cycle. He had only been married to his wife Sinead for two months, but on his death she agreed that his organs be donated and they gave life – or improved the lives – of four people.
Let me quote from his article in the ‘Irish Independent’ about that function : “I spoke with Sinéad, who was in great spirits, wearing her Elvis (her husband’s nickname) jersey of course. Likewise Shaun’s family, who embarrassed me by thanking me repeatedly for coming. There was a sofa on stage and when the marquee was at bursting point, the formalities began. If you could call them formalities.
“Owen Mulligan, older now, without the blond locks, but no wiser. Brendan Devenney, wearing a silver suit, like a boy band gone wrong. Joe McMahon, looking fresh and well, laughing at every word that came out of Mulligan’s mouth. Conan Doherty compered it very well under relentless pressure. As Mulligan said to him at the interval: ‘Never worry kid, you can’t get any worse.’”
What these stories tell is of the central role the GAA plays in the lives of people, parishes and communities right across the country.
It’s a point Brolly has repeatedly made over the years. He wants it to remain a grassroots, amateur organisation where community rather than profit is the main ‘mission statement’.
And it’s a point he makes well. In his ‘Indo’ article he pointed to research by Australians Catherine and Alex Haslam who found, for example, that socially integrated people recover much faster after an illness than those who are solitary.
He wrote: “Regular face-to-face contact in a strong community is 'a powerful vaccine.' Its effect on the brain is to lower cortisone (which causes stress) and produce dopamine (which causes happiness).”
John Hunt is, as I said, 98. Even at that advanced age his fervour burns brightly for all things Irish. Sinead Mullin was devastated by the death of her husband but because of family, friends and community she was able to carry on. The common denominator here is the GAA. It's a powerful bond for good.
The GAA is not above criticism – there are, as Brolly has repeatedly pointed out, concerns about the rise of commercialism and elitism within the organisation – but it deserves credit for the role in providing the social cement that binds much of our society together.
It’s an integral part of the fabric of what makes this place, despite all its faults and failings, a great country in which to live.
So let’s give credit where credit is due.