IT OCCURS TO ME: Scéaltaí galore!

Acknowledging a brilliant contribution to our oral history 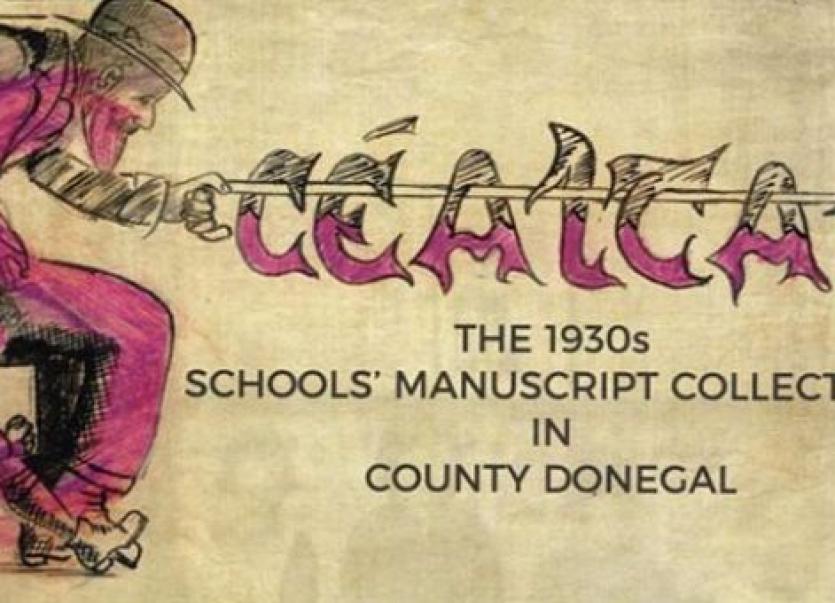 Last week, the County Donegal Heritage Office hosted the launch of a free booklet entitled ‘Scéaltaí: The 1930s Schools’ Manuscript Collection in County Donegal’ in Dooish National School, Ballybofey.
I’ve been engrossed in the booklet for days and agree with Eithne Ni Ghallchobhair who writes that the Schools Collection is a national treasure.
In these days of social media and Twitter, it’s wonderful to remember and acknowledge this “contribution to our national oral heritage”.
At a time when school discipline was harsh, many of the children poor and teachers seriously under resourced, it was altogether refreshing to find such great humour in so many of the ‘Scealtai’.
For example: An elderly bachelor living in the townland of Meenadreen near the Four Masters School came home from the May fair of Donegal one evening “maith go leór”.
He had a dozen of herring with him. His mother who was very old and feeble, was not able to rise to fry the fish. So he got the iron and started frying, and after great trouble he succeeded.
He muttered “now if I had a woman of my own I wouldn’t have this bother.”
His mother took no notice of his muttering. At last he shouted to her, “Mother, I have a woman in my eye at last.” She answered that and said “Arrah Jamie, you may keep her in your eye. You have no place else to put her”.
Another tells of how Johnnie McGlinchy was going down the town of Donegal with an old wag-by-the-wall clock under his arm to get fixed at the watchmakers. A neighbour named Charlie (who was fond of his drop) was standing outside Mick Mulacany’s public house.
He called to Johnnie: “No tick Johnnie?” “It’s aisy known there’s no tick,” answered Johnnie, “or you wouldn’t be standing outside.”
Another man in Donegal town with a cart of poteen heard that the ‘Revenue’ had information so he had to do a switch.
“There was another cart of turf coming in along with the cart in which the poteen was in. The men had no time to do anything but to change horses and put the white horse in the other cart.
“When the police came they took charge of the white horse and cart and brought them into the town and emptied the turf in the barrack yard, but the poteen was safely delivered by the other cart. So the police got fooled.
So the British Gover[n]ment failed to stop poteen-making in the parish of Inver. But the late Cardinal O'Donnell, then Bishop of Raphoe, made it a reserved sin to make poteen or sell it. So the making of poteen gradually stopped in this parish.”

“Father Mick Kelly was parish priest in Killymard forty years ago. One day he met an old woman on the road. She told him that she was not in good health and that she wanted some of the Spa well water and those in charge of it would not give it to her without money and she had none to give them.
The priest told her to come along with him and he would soon get her plenty of Spa well water.
He went into the river above the Spa well house. He made a little hole in the top of his umbrella and immediately the water sprang up.
James Mullin the mason from Castle Street, Donegal built a cement wall around the well to prevent the river water from flowing into it. People go to it to get cured.
The people used to say a prayer for the priest that found the well and for the man that built the wall around the well.”
A certain Parish Priest called the Right Rev. Monsignor Walker, who lived in Donegal, a few years ago, instructed his servant boy on the proper way to address the Bishop who was on a visit to the Parochial House.
“Now,” said the priest, “You go up to the bishop's room, knock at the door and when the bishop says ‘Who is there?’ you reply ‘The boy my Lord’.”
The boy, doing as directed, knocked at the Bishop's door “Who is there?” asked the bishop...and the boy, very much excited replied “The Lord my boy!”
Other stories deal with local cures. For example. “People say that if you boil turnips with some butter and mash them up and tie them up in a cloth and put them on your feet, the cold will go away” or boil buttermilk and a little sugar together and drink hot before going to bed.
Another cure is to boil dockan roots and the leaves of a sycamore tree with sugar and sweet milk.
Blackcurrant jam - a tablespoonful, with a cup of boiling water poured upon it, is an excellent cure for colds.
And a remedy for burns is to cover the burned portion with common baking-soda and then to be tied tightly with a cloth soaked in buttermilk.”

TRAMPING THE ROADS
One day a few years ago there was a tramp going along the road and he went into a public house in Laghey.
He asked the publican for a bottle of stout, and when he had it drunk he offered stamps in payment instead of money. The publican was quite willing to take the stamps, so the tramp jumped up, gave three stamps on the floor and calmly walked out.
About twenty-five years ago a man named Myles a humorous fellow, used to frequent Donegal town, and, indeed, he was well known throughout the country.
It happened one day however, a Protestant clergyman and his wife visited the town.
A few hours later the minister was ready to return but he could not find his wife, who had gone out to do some shopping.
While he was looking for her, he met Myles. Giving him a sixpence, the minister asked him to be good enough to search his wife.
A half-hour later Myles returned.
“I’m very sorry, your reverence, he said to the clergyman. “I searched all the public-houses in the town for your wife, but I could not find her!”