A step back in time at McCullagh's

Pocket-watch at jewellers dates all the way back to 1900 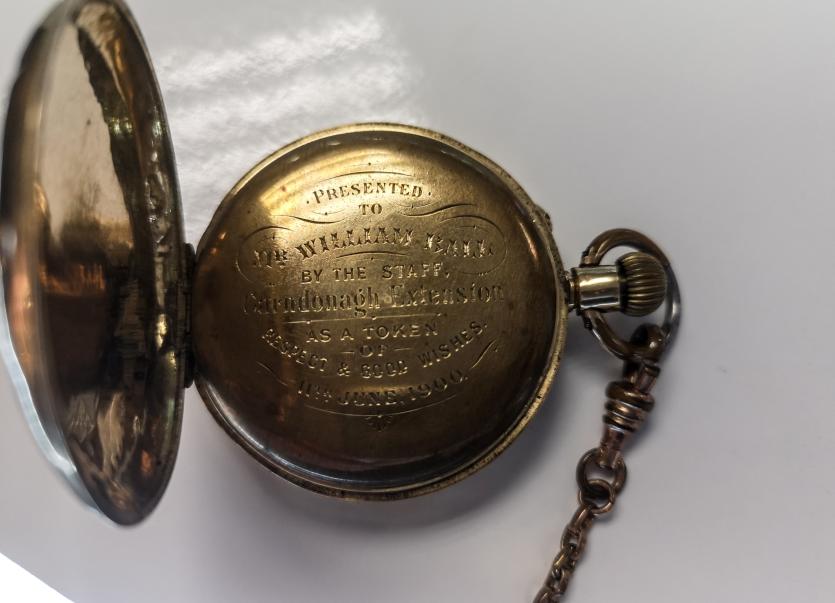 The pocket watch which was presented to William Ball in 1900. It still keeps perfect time PICTURES: BRIAN MCDAID

This weekend we will all step back an hour as we travel into winter time.
But in covering this annual event for this week's Donegal Democrat an inscription on the back of a very old pocket watch had our newsroom travelling a little more than one hour back in time.

Our journey transported us all of 118 years backwards as we got a glimpse of a family heirloom in a Letterkenny jewellers.
The watch belonged to a grandson of the local jeweller, R. Mc Cullagh, who originally set his business up in Letterkenny as far back as 1869.
William Ball, his grandson, was employed as an engineer on the building of the Lough Swilly Railway Extension line from Buncrana to Carndonagh. William was recognised for his work when he was presented with a gold pocket watch which included a gold chain and 5 gold sovereigns on the railway's completion on June 11, 1900.
The pocket watch, which still keeps perfect time, is a treasured possession of William Ball's great-grandson Julian and great-great grandson Gareth, who run the family business R. Mc Cullagh's Jewellers and Watchmakers at Upper Main St. in Letterkenny.
The inscription on the watch reads: ‘Presented to Mr William Ball by the Staff Carndonagh Extension as a token of Respect & Good Wishes, 11th June 1900.’ Kim Doherty and Mary Jo McGlynn, staff at McCullagh's Jewellers in Letterkenny, reminding us all to turn our clocks back an hour on Saturday night