From Letterkenny to Lanzarote - Daragh's making his mark 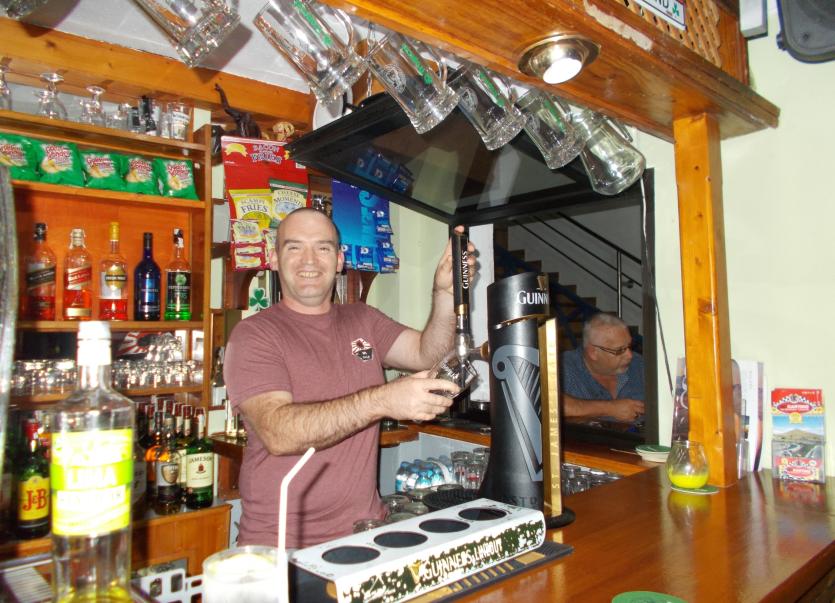 Daragh Boyle behind the bar in Ned Kelly's

With the news that Rory Gallagher had returned to Kilcar from Lanzarote, many Donegal holidaymakers and expats were wondering if and when another watering hole might become a magnet for thirsty Donegal ‘wans’.
Well, with perfect timing, the famous Ned Kelly’s in Puerto Del Carmen has been taken over by Daragh Boyle from Letterkenny, and I had the pleasure of enjoying the craic and ambience as Daragh welcomed a plethora of Hallowe’en guests from home and abroad.
Daragh is the son of Sean and Ann, and I have known his dad for many years, with his strong St. Eunan’s connections, but there is one memory we both treasure.
My Cusack Stand ticket for the 1992 All-Ireland Final saw me sitting in a section full of people from Offaly. At the end of the game, I looked around desperately to find another supporter from the home turf, only to find Sean Boyle a few seats behind me, shedding tears of happiness. We high fived and hugged and it was a fitting end to an emotional afternoon.
Sean is a native of Lifford but long associated with St. Eunan’s as a footballer and subsequently Chairman.
Although a corner forward, his son Daragh blossomed into a strong corner back and among his contemporaries were footballing greats such as Brendan Devenney, Kevin Winston, David and Johnny McGinley, John Haran, Damien Daly, Jonathan Scanlon and Shane O’Donnell.
He won two Minor titles with St. Eunan’s and played Junior with them until he was 35. He recalls that the 1990’s St. Eunan’s team was so strong that Ronan Mulligan, who was on the County Under-21 team was a reserve for his club.
His first ever manager was Dr. Jimmy McDaid, who ran the street leagues. For most of his young career, he was totally left-footed but in time, developed his right. A cousin of Shay Given, sport was always going to be a major factor in his life. And so it continues in Puerto Del Carmen….
Ned Kelly’s was originally owned by Cork people and was a favourite haunt of Munster Rugby fans. That still holds and GAA football and hurling, as well as Premier League soccer, draws fans from every county.
While having a pint there, I met Damien and Sinead from Manor, who were on their honeymoon, along with Anita and her husband from Inishowen, who were celebrating the first anniversary of their wedding. Daragh’s barman is a great character, Paddy from Bellaghy, so there is good natured banter about the Derry-Donegal rivalry.

Tourists
I met customers from Clonakilty in Cork, Ballivor in Meath, Kilbeggan and Castlepollard in Westmeath and a number of English tourists who admitted being seduced by the music and craic.
Regular duo ‘Fiddlesticks’ are a brilliant combination...guitarist and singer Kenny hails from Edinburgh and fiddler Olga comes from Moldova! I asked her to play ‘The Mason’s Apron’ and she blew us away.
When I first landed in Ned’s regular singer, Sean O’Mahony from Cork, was singing Patsy Cavanagh’s great Donegal anthem, ‘Home to Donegal’.
Old habits die hard...85% of the guests in the fabulous San Antonio Hotel across the way are Irish and it’s a treat to see the older ones troop in to Ned’s to see the RTE 6 pm News, have a drink or two and head back for the dinner!
When Daragh first came to Puerto Del Carmen, he worked for 18 months in ‘The Bodhran’, owned by 1960’s Showband legend, Johnny Crowley.
He recalls vividly: “The first drink I served here was a hot whiskey to an Irishman who was whinging about the rain!”
It was there he met the famous Jimmy about whom the original song ‘Jimmy’s Selling Watches’ was written...it then became ‘Jimmy’s Winning Matches’. Jimmy is still about and immensely popular on the strip….from Senegal to Donegal!
Daragh also worked for Limerick businessman Tom Stapleton in ‘O’Connell’s Dug-Out’ and credits both Tom and Johnny Crowley for giving him some very sound advice when he was contemplating purchasing Ned Kelly’s a year ago.
He officially opened it on October 17, and it’s 24/7, very hard work and open at Christmas.
However, in many ways it’s as if he’s never left Donegal...as the loyal customers flock back again and again.
He was waiting for the twice yearly visit from his old Letterkenny watering hole, Blake’s Bar, Raymond on the way with a dozen or so hardened sun worshippers (me eye!).
Unfortunately, my visit was brief as I would have treasured the craic and banter with that gang. Sean and Ann Boyle were landing as I was leaving, so for the next week or so, Donegal accents will predominate once again in Ned Kelly’s.
When Ned was standing on the gallows in Old Melbourne Gaol, his last words were ‘Such is life!’
Funny old world...as you leave Ned’s in Puerto after a great night out, ‘Such is life’ seems to be a very appropriate motto for this home from home.
While Jimmy’s selling watches, Daragh’s winning ways are paying dividends.