IT OCCURS TO ME: Time for a bit of match-making

If you plan to make a match in Ardara, take a wee read of this! 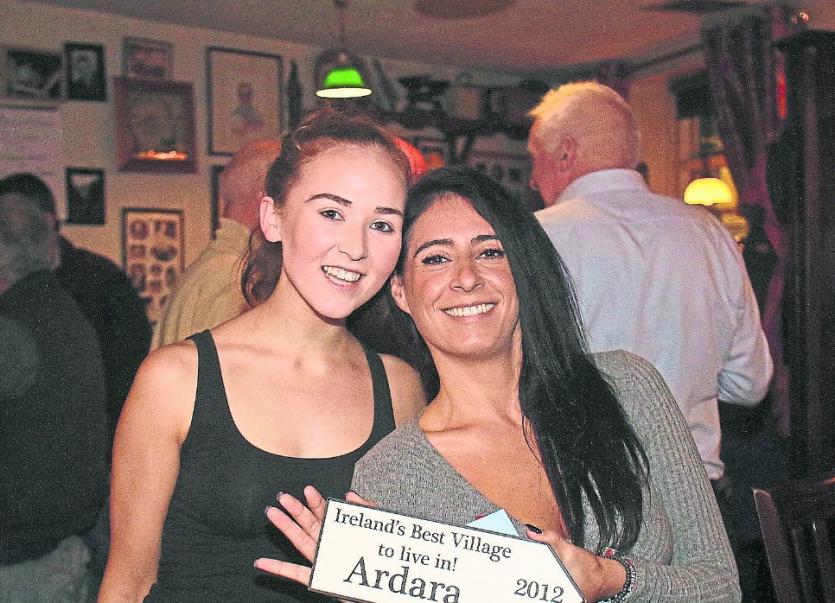 Stacey and Patricia enjoying themselves in the Corner House last year at the Matchmaking Festival in Ardara PICTURE: Matt Britton

I’m so looking forward to this weekend’s Matchmaking Festival in Ardara and am reminded of some great stories about the lengths some bucks would go to, in order to attract a soulmate.
A man once told my late father about a dance away back in the 1950's that he would much rather forget. He had noticed a new trend creeping in where men with slicked back hair seemed to elicit much better responses from the more snottery class of women, than those - like himself - whose hair resembled the rear end of a ewe just sheared by a man late for his tea.
To exacerbate matters, he had noticed his own usually shy brother starting to throw shapes in then local dance hall with a head on him that you could comfortably fry three cod, two large chips and a portion of onion rings in. When he enquired of the brother about the source of this magical elixir, he was told to buy his own. With barely the price of the dance, our friend hadn't tuppence to be heading to Strabane to buy what passed for brilliantine or hair oil.
One night, when the brother had headed off to the hall, this time with enough sheep dip to pollute the shores from Downings to Glen, your man went rooting around the house until he saw the magic bottle.
He dosed the head liberally, and headed off like Errol Flynn for a bit of country and western swashbuckling.
Not only did he fail abjectly to get a dance, but to his horror, men and women seemed to give him a wide berth all night.
The following morning, as he made his lonely way down to the cold wooden seat of the privy in the converted henhouse, the brother shouted after him: "Give that place a good scoureen when you're finished. There's new stuff out now...it's called Jeyes Fluid, there's a bottle of it here somewhere...you didn’t lift it by any chance?”
For men and women throwing shapes in the Corner or The Nesbitt from this Friday until Sunday….be warned...fragrance is all important!

On the subject of outdoor toilets, one of my favourite yarns concerns a local woman who was nursing in England, and took home a swanky friend but neglected to mention that the Water Closet or powder room was strategically placed between two rows of whin bushes about forty yards from the house.
Some hours after she landed, she was alone with the man of the house when she ventured: "Ahmm...excuse me, which way to the bathroom?" He gave her very precise directions, at which stage it dawned on the desperate woman where she was being sent. "Would you have a torch I could use," she enquired of him. "Mhaighdean Mhuire, asthor," he countered with some concern, "if you need light to see it, I'm glad you're not nursing me."

Two of my Cavan aunts also nursed in London and landed in Killeshandra once with another friend in tow.
My grandfather, Andy Galligan, was a man of few words, but the odd time he did open his mouth, he could stop the show.
He was born in 1878 and always referred to trousers as 'knickerbockers' or knickers...for short.
Women wearing slacks was a new phenomenon for him and his daughter's friend wore them for most of the holiday.
One day, on their way back from the town, they were caught in an 'ojis' downpour and the three of them landed in the door 'drooked'.
With genuine concern for the visitor, Andy looked at her and growled: "For the love o'Jasus, will you get your knickers off or you'll get pneumonia!"
There wasn't a dry eye in the house. I don't know what kind of wee women he was used to in Cavan but he was fascinated by any female over 5'5".
One of his sons married a regular size lassie but Andy couldn't wait to visit old Thomas McLean nearby and boast about his amazing daughter-in-law. "Thomas, I'm not exaggerating, she has a pair of ‘shouldirs’ on her wouldn't come in that dure!"
Thomas and his brother Dick played left half back and centre half respectively for the famous Cornafean Club as far back as 1913 and Dick captained Cavan in 1915 when they went to two replays with Monaghan in the Ulster Final.
I remember listening in fascination, as they recalled walking the thirteen miles to Cavan town to catch the train connection on the morning of a big match, and stopping momentarily at my grandfather's to get a light for their pipes.
Growing up in Downings, where my father played most of his football, I loved the characters who added as much colour to games as the players themselves.
Micky - not his real name - was one such. One night, he and my dad headed to a wake of a Garda Sergeant who had been a footballer of some repute some distance away.
There were the usual cups of tea, stronger drops, currant bread, John Players on the saucers and small talk surrounding the deceased.
In fact, Micky was fulsome in his praise of the legendary policeman and footballer and just before they left, he decided to head back once more to see his 'old friend' in the coffin.
Something made my father curious and so he followed him. Imagine his surprise when he observed Micky remove his cap again, lean in over the corpse and whisper: "Not a day too soon, you oul bastard ye!"
The Sergeant had once summoned him for piloting a Raleigh bicycle without a light while being as full as a bingo bus.
Paddy had never forgiven him.