‘Ava’s Orchard’ - a beautiful tribute to a truly fantastic girl 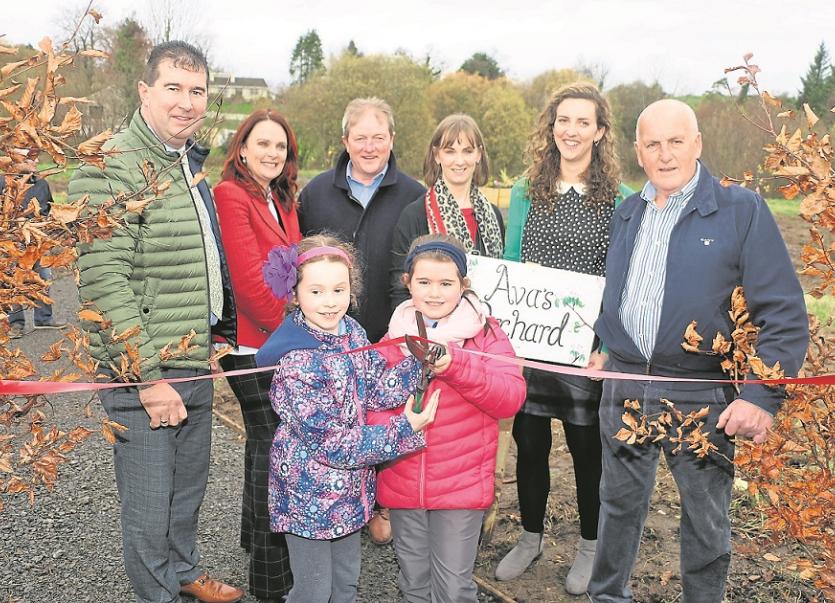 A large crowd of pupils, teachers and parents were joined by members of Donegal Co.Council at the official opening of St Eunan’s Sensory Garden and orchard in Laghey on Wednesday.
The orchard consists of apple, pear and plum trees and lots of lovely fruit bushes like black currant, gooseberry and raspberry which were just planted by the children yesterday.
The children decided to name it “Ava’s Orchard” after Ava Feehily Harrington, a former pupil who sadly passed away last year. It will serve as a beautiful memory and tribute to a fantastic girl who is dearly missed by everybody in the school.
Principal Aideen Lyons told the Democrat, “The parents and members of the community have established a path through the orchard which leads down to “Fairyville”, a magical seating area for children to enjoy the outdoors and to view nature.”
She added, “At the back of the school we now have a fantastic sensory garden which consists of sensory boards, percussion music stations, a wildflower garden, a bug hotel, bird boxes and feeders to name but a few. “The main feature is a roofed structure with three raised planter beds. Parents and members of the community worked tirelessly since the beginning of the year to create this. “We would like to thank the Donegal County Council and all local businesses who donated equipment, services and materials. It is sincerely appreciated and it will provide an exciting, interactive learning space for children in St. Eunan’s for many years to come. “It could not have happened without them.” The pupils of St. Eunan's NS in Laghey are joined by their teachers, parents and members of Donegal Co. Council at the official opening of the new sensory gardens at the school PICTURE: MATT BRITTON