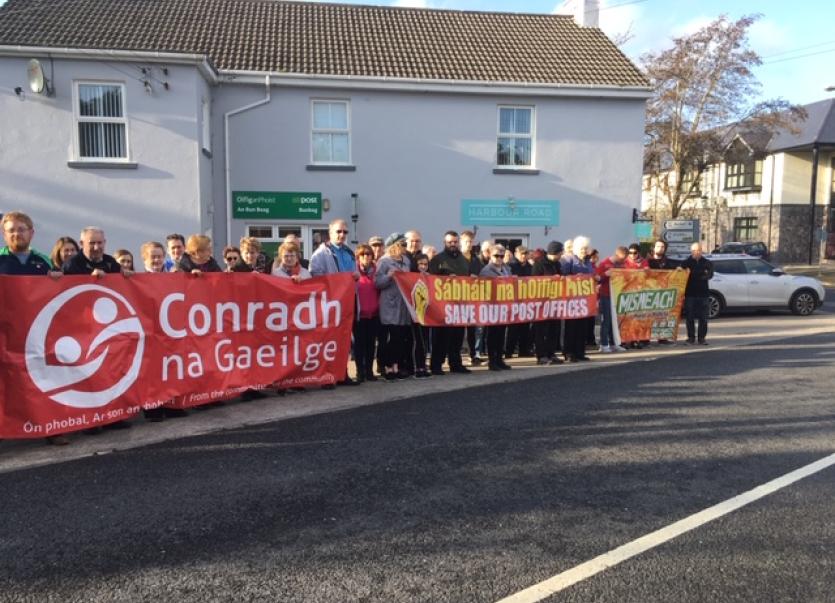 A group of community activists from Gaoth Dobhair are planning to protest outside the main post office in Letterkenny.
The protest is due to take place on Saturday, December 8 at 11am and the group is calling on people in other areas of the county to join them.
The activists have already protested in their own area against the closure of local post offices but feel the time is ripe to widen the focus of their actions.
Independent Councillor Mícheál Cholm Mac Giolla Easbuig, one of the organisers of the protest, said that it was intolerable for any community to put up with what An Post is doing to rural Donegal at the moment.
“We have already lost four post offices in Burtonport, Dunfanaghy, Gort a’ Choirce and An Bun Beag and we are awaiting the result of a review of the decision to close the post office in Bun na Leaca. On other areas, like Churchill, Quigley's Point, Ballymagen, Ballyliffin, Burnfoot, Culdaff, Culkeeny, Dunaff, Dunkineely, Kildrum, Meenaneary and Rossnakill, post offices are either closing down or are threatened with imminent closure. This is death by a thousand cuts.”
Mac Giolla Easbuig went on to explain that the post office issue was just a symptom of a greater disease affecting the whole county, and rural areas in particular.
“Since the foundation of the state, successive governments led by both Fianna Fáil and Fine Gael, have starved Donegal of infrastructure such as hospitals, railways, motorways, broadband and proper electrical and gas networks. Some rural areas become inaccessible during the winter because of lack of funding to the County Council. The list is endless. It is time communities came out and took a stand and fight for their survival because government policies are killing communities throughout rural areas, not just in Donegal, but throughout the country.”
“We were advised by establishment politicians that the only way to fight post office closures was to make submissions to the review body. This approach has patently failed and it is now left to the communities to fight their own cause.”
Mac Giolla Easbuig said that people from other rural areas would be very welcome to join the Gaoth Dobhair protest outside the post office in Letterkenny and, if they needed more information on the event, to contact him at 0858042050.