IT OCCURS TO ME: ‘A momentary stay against confusion’ - we all need one 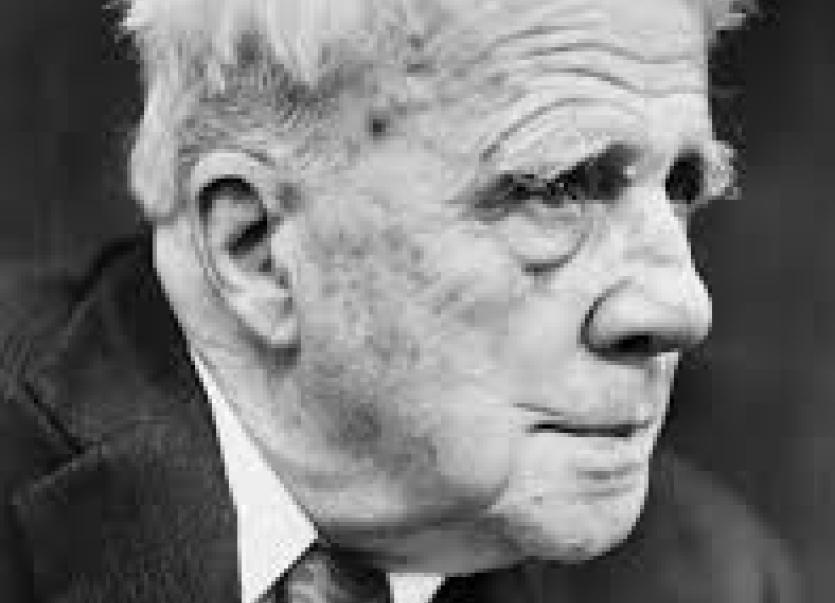 In September 2017, at the Amesbury Country and Bluegrass Festival in Massachusetts, photographer Larry Frost showed me the house on Point Shore where the great American poet, Robert Frost, had a summer vacation house.
Larry is a distant relation of the poet, who read at JFK’s inauguration, and Robert resided across the state line in Derry, New Hampshire.
Frost reminded us that “To know who you are, you must have a place to come from” and “Home is the place, that when you go there, they have to let you in.” I love his cussed downhomedeness.
His definition of poetry is also superb...he says: “It begins in delight, it inclines to the impulse, it assumes direction with the first line laid down, it runs a course of lucky events, and ends in a clarification of life. Not necessarily a great clarification, such as sects and cults are founded on, but in a momentary stay against confusion.”
Ah...a momentary stay...we all need one periodically.

YOU MAY ALSO LIKE TO READ: It OCCURS TO ME: In praise of the 'Schemozzle'

Poetry, momentary stays against confusion and the quirks of fate all coalesced in my head of late when I received the following letter:
“Dear Frank,
My name is Ivan Goldsberry and we met many years ago at the funeral of the late great Eugene Gallagher. I had worked along with Eugene for many years in Gartan and in fact I was a past pupil of his from Old Bawn Community school in Tallaght Dublin.
I still have regular contact with Eugene's sisters and visit Gartan every few months.
I'm reaching out to see if you recall the poem you wrote about Eugene if I recall correct there was a line about the two of you arguing over the last egg for breakfast and a line about sitting in Hughes pub (Mc Clafferty) now unfortunately closed. I'm wondering would you have a copy of the poem that you could forward on to me as your words meant a great deal to me.”
To my own great surprise, I could recall each line from almost 30 years ago and I sent it to Iva, whom I hope to meet up with in the New Year. He sent me the above photograph which has Eugene speaking at the opening of the Gartan Leisure Centre back then, with the late Minister Sean Doherty and just about every councillor and TD in the county waiting their turn behind!
Here’s the poem:

IN MEMORY OF EUGENE GALLAGHER
(Who died in the Andes, Ecuador, January 1990).

I'm writing this the following day, old friend,
Struggling for words, knowing their futility,
But remembering, how you would have said:
"If it's a struggle, it's all the more worthwhile"

Only last April, on the slopes of Mount Errigal,
My vertigo played up again, and you laughed me
To the summit on my hands and knees.

I remember that laugh, back then
It echoed in the hush of the Study Hall,
And I marvelled how
Another twelve-year old
Could ever laugh at all.

It echoed in the kitchen
Of the basement flat in Upper Rathmines,
As we tossed for the solitary breakfast egg,
Heads I win and tails you lose.

It echoes forever in the Poisoned Glen,
In the hills above Glenveagh,
And by the lakes of Min an Labain,
I see you laugh above your pint in Hughies,
Above your cup in the Dining Hall,
On a peak above your beloved Gartan,
Your hand reaches out.....
"One step, that's all." A few years ago, I was asked to the Patrick Kavanagh Centre in Inniskeen in Monaghan. It was an absolute delight to savour the memoirs and books of the great poet, someone teacher Charlie McGarvey in Carrick Tech had a great fondness for, and whose enthusiasm rubbed off on me. Like countless other I especially love his Christmas Childhood poem, which ends:
“My father played the melodeon,
My mother milked the cows,
And I had a prayer like a white rose pinned
On the Virgin Mary's blouse.”

“What I remember best,
Are the slow guttery candles
In the Church of John the Baptist, dripping wax
On my soutane, fresh out of the hot press,
With aired socks and surplice.

Boys, but I knew my stuff,
Never once wasted a drop of wine,
My fingers stiff, as I firmly held
The top of the cruet, and poured
The blood of Christ the Lord.

And I was Lord of Latin,
Not understanding a word,
I rhymed it off by heart, on a mile of Umlagh Road,
"Johnny McAuley, how's the form?"
Per Omnia, Saecula Saeculorum."

A terror for the thurible was McAuley at Benediction,
Incensing the Monsignor without fail,
Loved by the congregation,
He cried the night of Midnight Mass,
Seated amongst his admirers.

It was a night of birth for everyone,
And a new conception for some,
A pouring forth of faith, a present of celebration,
The choir, so often deserted, sang full,
Demanding to be heard.

It was ethereal, something far
Beyond a great grey chapel, where we were men
For an hour or so, not just boys on an altar.
It was drama, child actors hungry for notice,
Now genuflecting properly.

The lights, not enough of them
To seek out every corner, silhouetted
Men and women in varied poises of prayer,
Beads rubbing between thumb and forefinger,
Their Kingdom Come.

Throughout the year, men sat on one side,
Women on the other, but tonight,
In new gloves and hat, my mother knelt
By my father, proudly watching their eldest son,
Whose mind was on cowboys, a holster and gun.”

Robert Frost also reminded us that: “Forgive me my nonsense, as I also forgive the nonsense of those that think they talk sense,” and “Half the world is composed of people who have something to say and can't, and the other half who have nothing to say and keep on saying it.”