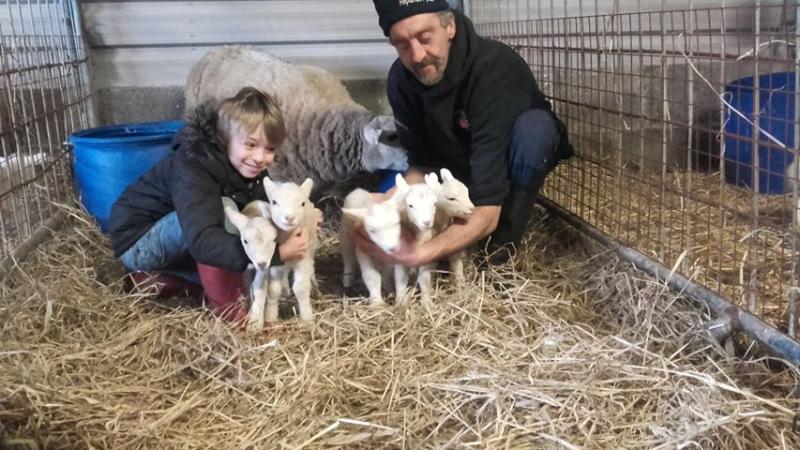 James Vance and his son Nathan with the five lambs

A Donegal farmer had a Christmas surprise when he delivered five lambs on Christmas Day.

James Vance from Ballintra had just finished his Christmas dinner when he rushed to the pen where the Lleyn ewe had been showing signs of being ready to deliver.

While three or four lambs are common enough, the delivery of five alive and well lambs is rare.

James had had little sleep in the days before as he tries to be at the birth of every lamb on his farm. The delivery had been expected for a couple of days and in the end the new arrivals were polite enough to let James and his son Nathan finish their Christmas dinner. The special delivery then came about 5.30pm.

“I was having dinner and I knew I would have to be quick as we knew she was lambing so I scooted back up as soon as I could. She had been scanned for three but I was expecting four. I started to lamb her and took three out and felt a fourth. It was like a Christmas bag, there was no end to it. I put my hand in and there was a fifth.

“When they were on the ground I counted them twice as I couldn't believe it,” he said.

All five lambs are doing well, as is their mother.

“It was a lovely Christmas present. I've not had much sleep, staying awake, waiting for the delivery. The minute you sleep, the minute they will come.”