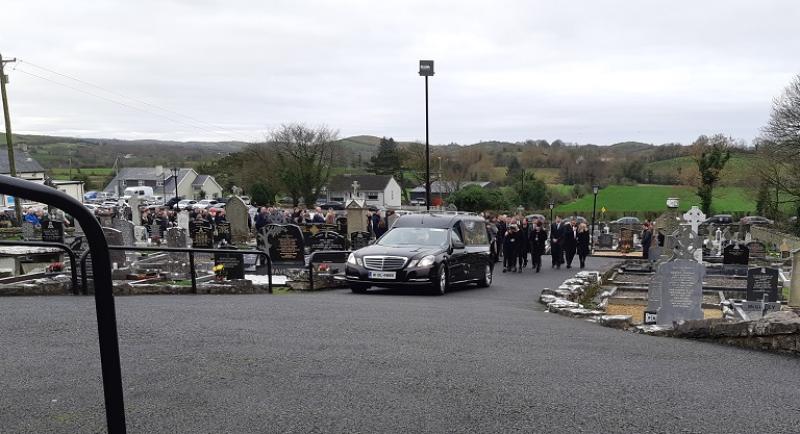 St. Brigid's Church, Ballintra was packed to overflowing as the funeral Mass of the late Dermot 'Rocky' Gallagher took place.
The attendance reflected the outpouring of sympathy and grief felt at the sudden death of Dermot on Thursday last in just his 50th year.
It was very poignant that throughout the Requiem Mass, Dermot was just referred to as 'Rocky' by the chief celebrant, Fr. Hugh Hanlon (who was assisted by Fr. Jonathan Meehan).
Rocky was all that Dermot was ever known as, a nickname he earned during his boxing days in the local club in the Community Centre, Ballintra, under the guidance of Paddy Doherty.
In welcoming everyone to the Mass, Fr. Hugh Hanlon, said the huge crowd was a reflection of the way Rocky was held in the community and of the respect the Gallagher family had also.
"It is difficult for us to understand the meaning of life when someone is taken from us so suddenly; we feel naturally abandoned, lost, even bewildered."
In his homily, Fr. Hanlon, said: "In April 1969 Dermot Gallagher was carried into this church to begin his life journey, one that unfortunately proved shorter than we would have anticipated. Today, almost 50 years later, he was carried into the same church to begin another life."
Before the start of Mass a paint brush and Naomh Brid jersey were brought to the altar to represent his life as a painter and decorator and as a sportsman.
Speaking to a Naomh Brid Club member before the arrival of Rocky's remains, he said that the only sport Dermot didn't play was ice hockey.
Prior to being nicknamed Rocky, Dermot was nicknamed Tadpole during his school days in Ballyshannon.
No matter where he was in his life, whether in Boston (where he spent some years) or in Donegal, his face was a welcoming one, always ready to help and with a smile that seemed to be permanent.
Apart from his playing career with Naomh Brid, he was a very well respected coach and manager at the club and was also involved with ladies football at club and county level.
Naomh Brid chairman, Martin Quinn, paid tribute to Rocky saying he would be a huge loss to the club. "He will very badly missed. He was involved hugely with the club, especially at underage. He was involved from a young age with players, even our own lads when he only seven or eight years older than them.
"He put a big effort into the club and was well liked. He had a good word for everybody. I'd say he hasn't an enemy, either locally or abroad anywhere. It's a huge blow and hard to understand," said Martin.
After the Requiem Mass, the remains of Dermot Rocky Gallagher were laid to rest in the adjoining graveyard.
Predeceased by his parents Tommy and Mary Jo and by his brother, Pauric, Dermot is survived by daughter Nicole; brothers Matt and Declan; son-in-law Damien; grandchildren, sisters-in-law, nephews and nieces and a wide circle of friends.