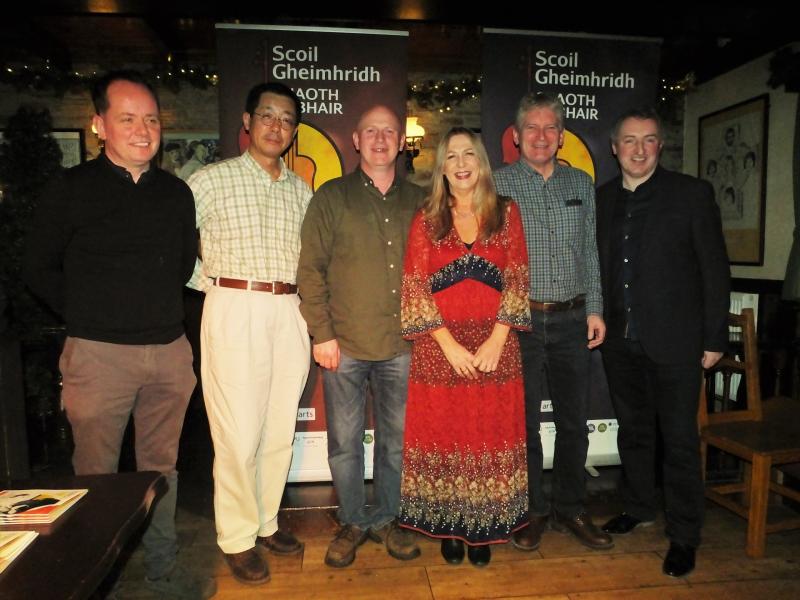 A larger than usual number of people converged on Gaoth Dobhair for this year’s Scoil Gheimhridh which took place last weekend and came to a close on New Year's Day.
This year in its 25th year, formerly Scoil Gheimhridh Frankie Kennedy, this is the fifth year under the new organisers, Comharchumann Forbartha Ghaoth Dobhair.
The main aim of the Scoil Gheimhridh is to pass on through sharing knowledge and nurturing talent, the joys of traditional Irish music with special emphasis of songs and music from the Donegal Gaeltacht. The Scoil Gheimhridh was officially launched in Teach Hiúdaí Beag, Bunbeg last Thursday evening. Long term friend of the Scoil Gheimhridh, Professor Dermy Diamond was given the honours to perform the official opening.
He is recognized internationally for his work in science as director of the National Centre for Sensor Research at Dublin City University. He was recently a recipient of an honorary Doctor of Letters for his services to science and traditional music.
Born and raised in Belfast, Dermy is a traditional musician who has a great grasp of Donegal fiddle music. His diverse repertoire and style continues to be influential and inspirational within the traditional music community.
Among those present at the opening ceremony were: Lukas, Ilenia, Silvia and Jennifer from Switzerland while James travelled all the way from South Africa. This is his twentieth year for Toru Kumagai from Japan to attend the Scoil Gheimhridh. Also there were: Patsy Ryab from England, Jonny Giordano from the United States and James Forbes – Birnie from Scotland.
Speaking at the launch Professor Diamond said this event is very important to a place like Gaoth Dobhair. It attracts people to the area which is known as a haven for traditional music with stunning landscape and a great place to live in.
He said his father came to Rann na Feirste eighty years ago to learn Irish. His parents had been coming to the area for many years and they spent their honeymoon here in 1950. He learned the banjo and guitar and said he has fond memories of playing at sessions at Teach Hiudaí Beag where the late Francie Mooney was a regular. In 1970 he and a few of his mates formed a band called ‘Buachaillí’ and said Francie Mooney was their hero. He added that Francie would welcome musicians to join him and his family members at the sessions. He said he had fond memories
The master of ceremony was Dónal Ó Cnáimhsí, Oifigeach Pleanála Teanga do cheantar, Gaoth Dobhair, Anagaire, Rann na Feirsde and Loch an Iúir. Cathal Ó Gallchóir, Manager of An Chrannóg, Derrybeg also spoke and he paid tribute to everyone who helped and co-operated with them in organizing the Scoil Gheimhriadh.
He thanked Conor Byrne for drawing up the programme for the Scoil Gheimhridh. He also thanked all their sponsors.
He said it was gratifying to see familiar faces at the Scoil Gheimhridh and added he hoped that they enjoy the event.