Opry le Daniel set to return to the Millennium Forum

Popular TG4 show will run for seven nights in June 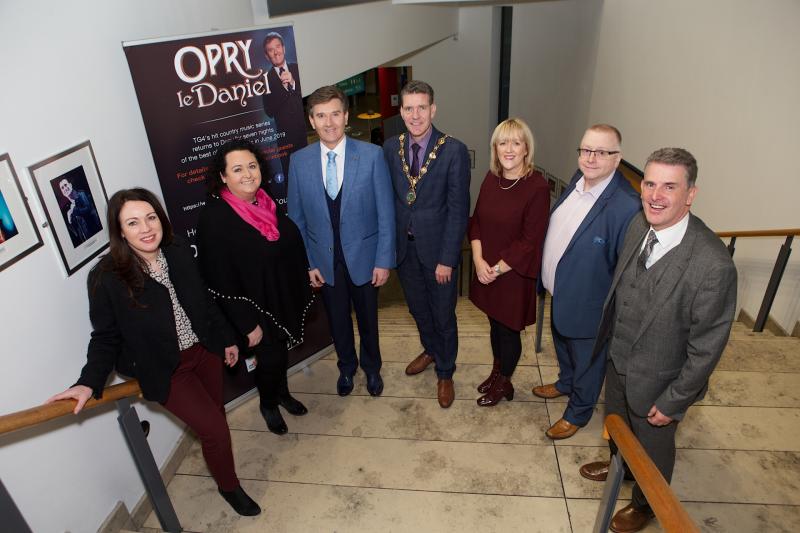 Following his sold-out Christmas concert , Daniel O’Donnell fans were delighted to hear the country music star announce the return of his host show, Opry le Daniel, to Millennium Forum in Derry in June.
TG4 television’s most popular and highly viewed country music show, Opry runs for seven nights, from Saturday, June 15 to Friday 21 with two concerts per night scheduled from 7.45pm.
This biggest televised extravaganza of country music, with artists from both home and abroad performing on stage, is now in its eighth series and among next year’s guests will be Ireland’s ‘Mr. Romance’, the one and only Roly Daniels appearing on Wednesday, June 19, his first ever appearance on the Opry stage.
Having had top hit recordings of ‘Hello Darling’, ‘He stopped loving her today’ and Mr. Jones’, this is a night of nostalgia not to be missed.

With certain artists/dates to be confirmed, Sunday night, June 16 will host a special tribute to American icon Billie Jo Spears, with, among others, Ireland’s own Philomena Begley, who toured with Billie Jo, singing unforgettable tunes such as ‘Blanket on the Ground’, ‘Misty Blue’, ‘What I've Got in Mind’ and of course, ‘Your Good Girl’s Gonna Go Bad.’
Monday, June 17 will see the first of the very popular ‘Country Music Families’ show and taking the stage will be Jimmy Buckley and his daughter Claudia.
Jimmy needs no introduction to country music followers, being one of Ireland’s best loved music entertainers with a big following in Ireland and throughout Europe, and daughter Claudia who has received rave reviews since her hit single ‘Blue Christmas’ was released in 2017. This is indeed a very special family show with this father and daughter debut.
Tuesday, June 18 will host the second of the ‘family show’ theme and this time there’ll be a warm welcome for the energetic Mike Denver appearing, for their first ever live TV recording, with his mother, Róisín Fallon.
Since first making his stage debut with his mother at age 13 years, Mike has forged a career as one of Ireland’s foremost country singers, with his debut single ‘Wings to Fly’ followed by albums ‘Seasons in the Sun’, ‘Vintage Country’, and ‘There's Only One Mike Denver’.

Fantastic finale
Bringing you a fantastic finale to this week’s country music festival Opry are proud to have a Glen Campbell Tribute with the late singer’s daughter, Ashley taking time out from a European tour to appear in Derry.
A well known American country music singer and songwriter in her own right, having played banjo for her father during his farewell tour in 2011/2012, her debut single ‘Remembering’ in 2015, about her father and his struggles with Alzheimer’s disease, went on to win a Grammy, was nominated for an Oscar and she also contributed the track ‘Home Again’ to her father’s TV documentary.
The world of country music is a far better place with Ashley Campbell and the country music lovers of Opry le Daniel are sure to give her a massive Irish welcome at Millennium Forum, Derry, when she will be accompanied by, among others, Irish artist Johnny Brady
Also appearing on the Friday night is The Willis Clan, a family band from Nashville, Tennessee, who first came to prominence in ‘America’s Got Talent’.
Their appearance this year on Opry le Daniel harmonizes perfectly with the family’s debut on the American TLC channel with their own reality show documenting the process behind both their creative and physical adventures.