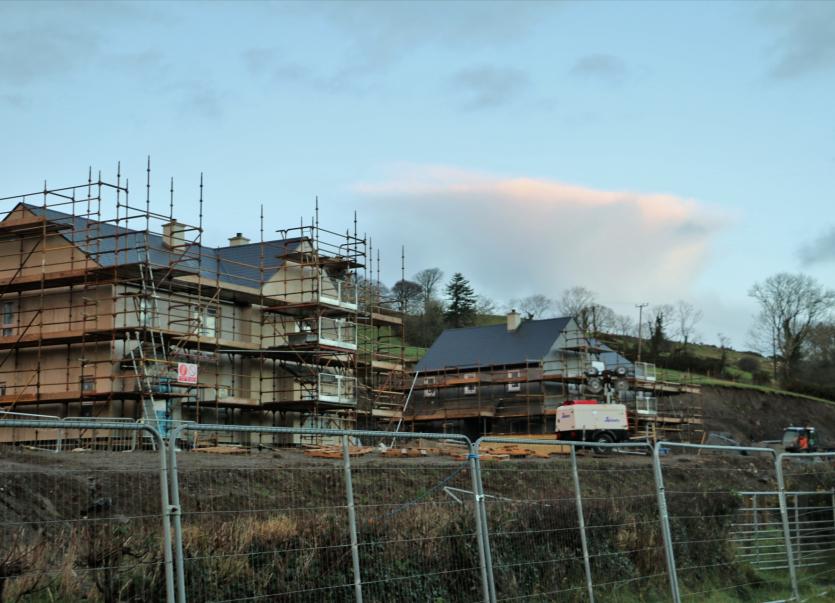 Some of the houses at the development outside Donegal Town picture: Matt Britton

Politicians have expressed anger at a decision by Donegal County Council to turn down an extension to planning permission for a housing development in Donegal Town saying the decision ignores the housing shortage in the area.
Planning permission was granted for the construction of 58 houses at the site at Lurganboy in 2008.
The permission was extended to a different applicant in early 2013 until November last year.
Donegal-based Axis Construction became the third applicant to make an application on the 58 houses when it applied for a further extension in November.

The council refused planning permission this week saying “substantial works were not carried out pursuant to the permission during the appropriate period” and it considered that permitting a further extension would be “contrary to Section 42 (1A) of the Planning and Development Act 2000 and thereby the proper planning and sustainable development of the area”.

Cllr Tom Conaghan said the housing was needed given the new employment generated in the town by Abbott, which last summer announced 500 new jobs at its Lurganboy facility.
“At present, there is a critical housing shortage in Donegal Town both in the rental sector and new properties on the market,” he said.
“The council should bear in mind that by refusing this application in the midst of a housing crisis they have lost six homes for social housing as per the legislation and deprived 200 workers of employment in the construction stage.
“Many years ago I was quoted as saying the gates around Donegal Town have been shut. Are we facing a similar situation?”
Cllr Michael Naughton said the decision flew in the face of government legislation.
“I would like to remind the planning department that legislation introduced a year ago by the Minister of Housing Eoghan Murphy and approved by the Dáil to extend planning approvals in respect of planning permissions that were nearing expiry providing substantial works were carried out.
“This development would appear to have complied with the spirit of the legislation,” he said.
Leas Ceann Comhairle of the Dáil, Pat ‘the Cope’ Gallagher said he was “totally baffled by this decision”.
“I am more than familiar with the legislation and having visited the site on a number of occasions as late as last week, I would have thought that the works already carried out more than fulfilled the conditions for an extension.”
Cllr Noel Jordan said: "I will be urging the developers and the planners to meet with a view to seeking a solution to this situation.
"There have been no formal objections or submissions and I will be of assistance in trying to arrive at an equitable solution."

Local businessman Maurice Timony said the decision was “a black day for Donegal”.
“I lay the blame squarely at the door of the chief executive and the county council. Orderly planning and economic development have just been sold down the river,” he said.