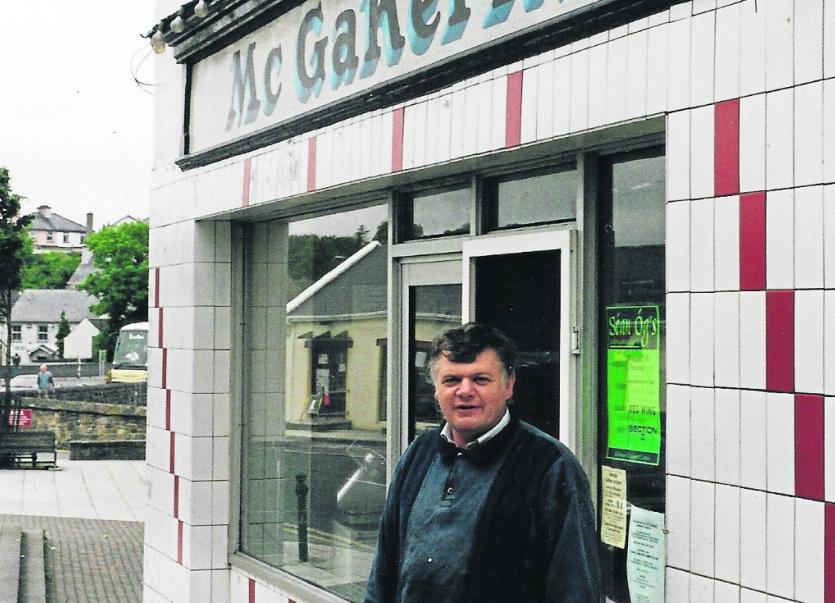 It is hard to imagine Ballyshannon without John Mc Gahern. He epitomised William Allingham’s view of Ballyshannon as “The kindly spot, the friendly place where everyone is known/And not a face in all the place but partly seems my own”.
With the family business of Mc Gahern’s Butchers situated in the heart of the town John was a familiar figure as, in his shop coat he made his daily deliveries of meat to the shop.
Long before the buzzword of traceability John personally oversaw the journey of the animals he had reared on his farm on the fringes of the town to the counter of the shop.
However, farming was not John’s first love.
As a teenager he had already found what made his heart sing when he joined the revived Ballyshannon Brass and Reed band led by Brother Robert.
This ignited a lifelong passion for music and an outlet for his multi-talented musical ability featuring the coronet, trumpet, keyboards and vocals.
His talent coincided with the dizzying explosion of showbands on the Irish music scene and he was in music heaven as he played all over the northwest in a number of different bands including The Dawnbreakers and New Sounds.
His dream of being a full time musician had to give way to the sense of duty and responsibility that he felt as an only child to his father’s expectations that he would work on the family farm and butchery business.
For the rest of his life John managed to juggle the competing demands and to continue with his beloved Country and Irish music and the Brass and Reed Band.
There was compensation for the loss of his dream for this only child when he married Valentia Gormley and the arrival in quick succession of three daughters and two sons transformed the lonely house he had grown up in into a warm and loving home full of music, books and noise.
Valentia recalls how, during those hectic years with a young and growing family the only place John could do his daily trumpet practice was behind the locked door of the bathroom!
John steered a slow and steady course through his busy hardworking life with loyalty and reliability his trademark.
This was evidenced by his quiet care of his father Pat and his two aunts Aggie and Rosaleen who in their old age lived with the family.
That caring was also evident in his humane treatment of his cattle and his respect for the land and the natural world. His lack of interest in owning farm machinery resulted in a unique style of foddering in which John balanced with laser precision four bales of hay in the open boot of his multi-tasking car and drove it through the fields to the bemused animals.
Beneath John’s slow and steady exterior lurked a quirky, impish sense of humour, with a wickedly accurate capacity for mimicry with his use of gestures and head movements able to reduce others to helpless laughter.
He was not just the musician that everyone wanted to hear but also the quiz guru everybody wanted on their team.
He had a huge appetite for learning and in the pre-internet days he commandeered the encyclopaedias ostensively bought for the children.
He was frequently to be seen still in his foddering gear, a cigarette dangling from his lips, engrossed in an encyclopaedia as he followed up on some topic on which he had been mulling over as he was tending the cattle.
Military history, particularly the American Civil War was one of his many interests.
John’s long illness allowed for a long goodbye to the family, friends and town he had loved so much for so long.
It is fitting that he is still a part of Ballyshannon as he rests now in the ancient Abbey Cemetery beside his parents and grandparents and that he was escorted there by Ballyshannon’s Brass and Reed band. At his graveside Michael Gallagher’s solo clarinet rendition of “Oh Mien Papa”, which John had made so uniquely his own on the trumpet was a fitting farewell.
John is survived by his wife Valentia and he lives on in his five children and to date his five grandchildren.
May he rest in peace in a musical heaven.