IT OCCURS TO ME: There's no border in a blizzard 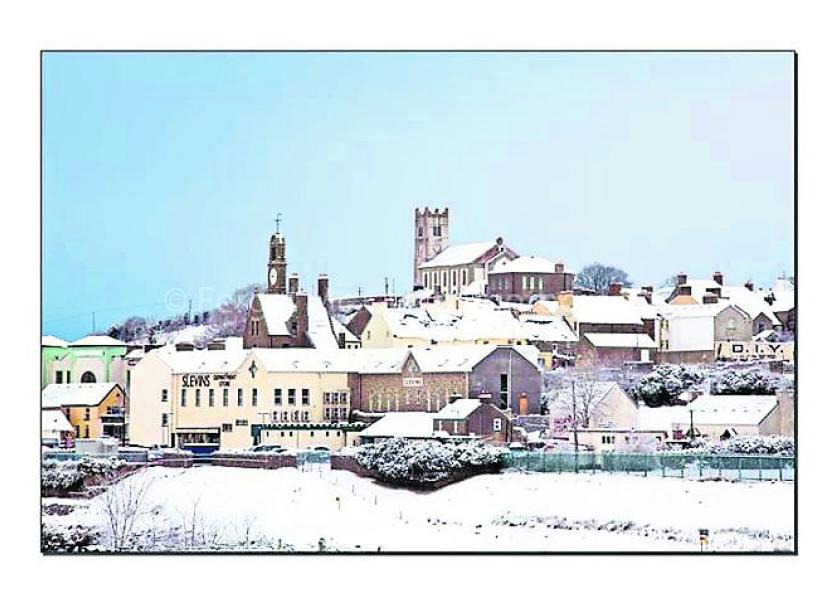 It’s easy to forget, that despite all the Brexit fire, brimstone and bewilderment, that in the old days, prior to the Troubles, and despite the border nuisance of Customs and Excise, people – including those entrusted with law and order – often rallied and cooperated in times of crisis.
I see where some are predicting the return of ‘The Beast From The East’ in February or March, and as I have long been fascinated by the ‘Big Snow’ of 1947 because of my dad’s reminiscences, I have gathered many stories from that extraordinary long winter.
One of my favourites happened in Blacklion during the height of a blizzard when a bus got embedded in a deep drift, and Gardai and civilians rescued the twelve passengers. Subsequently the driver and conductor and took them to Belcoo RUC barracks.
There they were served with a hot meal and were later put up by householders back on the Cavan side in Blacklion.
Also, the Kilnaleck News reported that the snow had delayed the funeral of Mrs Mary Galligan, Aughaloora. The coffin had to be carried on the shoulders of the young men of the district to Ballynary cemetery, a distance of three miles.
The paper reported a number of men had to cut a way through the snowdrifts in front of the procession.
Nearer home, in ‘Passages of Inishowen’, Pat Dorrian of Raphoe recalls: “I vaguely remember the ‘big snow’ of 1947. We had to walk to school with great difficulty but the snowball fights were great fun.”
Rosaleen Tourish – mother of Altan’s Ciaran Tourish – remembers: “It wasn’t all sunshine then. We had some very harsh winters as well. I remember March 1947 in particular when we had a terrible snow blizzard.
“Our house was completely snowed over and a man who lived farther up the road from us had to stay in our house for a couple of nights as he couldn’t get through the deep snow drifts to go home. It was a great opportunity for sleighing though!
“The older family members could go for a couple of miles over treetops and everything else. The sun glistening on the frozen surface was like the most brilliant of diamonds spread out in an unending carpet. I have never seen snow last so long.”
Margaret Bradley of Carndonagh recollects: “One of my earliest memories is that of the Big Snow in the spring of 1947.
“I don’t know how long it lasted but, as a small child, it seemed a long time.
“I can still see the postman struggling down the lane to our house walking on a wall of snow as high as the hedge. My father cleared paths out from our door to the turf house, byre and barn.
“He tended to the cattle and sheep while my brothers and I made sure there was a good supply of turf during the icy spell.
“The shopping that was always my mother’s task had now to be done by my father mainly for food and oil.
“We had endless fun sleighing and building snowmen. The countryside was a magical sight when the sun shone; the snow glistened like diamonds. Eventually the thaw came and with it a return to normality, including back to school.”
My father’s most vivid memories are of coming across dozens of dead frozen animals in the April/May thaw in the Laggan area. Perfectly preserved!

STONE ME!
In the early 1990’s I attended a function in a rural hall which was to be addressed by an irascible and notoriously unreliable amateur archaeologist.
There was an inordinate delay and we all knew something was amiss when the committee chairwoman nervously tottered onstage and gabbled into the microphone: “I’m terribly sorry but due to circumstances beyond his control, our guest Mr. ‘Bloggs’ cannot be here this evening…but we’re absolutely delighted that Frank Galligan has agreed to take his place at short notice.”
I was dumbfounded, as she had not even hinted at this possibility and my knowledge of archaeology was less than amateur.
The round of applause which greeted her announcement propelled me out of the seat and as I passed her en route to the podium, she whispered: “I’m so sorry, but panic got the better of me!”
Panic had got the better of me too, as I searched frantically for an introduction which might save face.
I was working for BBC Radio Foyle at the time, and a few days previously, Seamus Heaney had organised an exclusive interview for me with the legendary English poet, Ted Hughes.
I thought a serious bit of name dropping might get the audience’s attention so I began thus: “Thanks to Seamus Heaney, I was privileged to interview Ted Hughes in Derry’s Guildhall a few nights ago.
“I asked Ted why ‘stone’ was such a common feature in his poems and he answered: “Stone was the first language…before we could talk, we made shapes to convey messages to one another.”
I then proceeded to quote some of Hughes and Heaney, but the mention of stone was my last contribution to archaeology!
An hour or so later… having dredged up every ounce of verse and anecdote I could get my sweaty hands on, I finished to very generous applause.
During the lukewarm Chardonnay and vol-au-vents, a man approached me and shook my hand and said something to the effect: “Jasus, sir, herself dragged me out to this tonight and me having no interest in that archaebuckinology or whatever, but fair play to you, I enjoyed it.” Stone me! - was my silent reaction.