IT OCCURS TO ME: Packie Manus Byrne - the elegant gentleman who left his mark 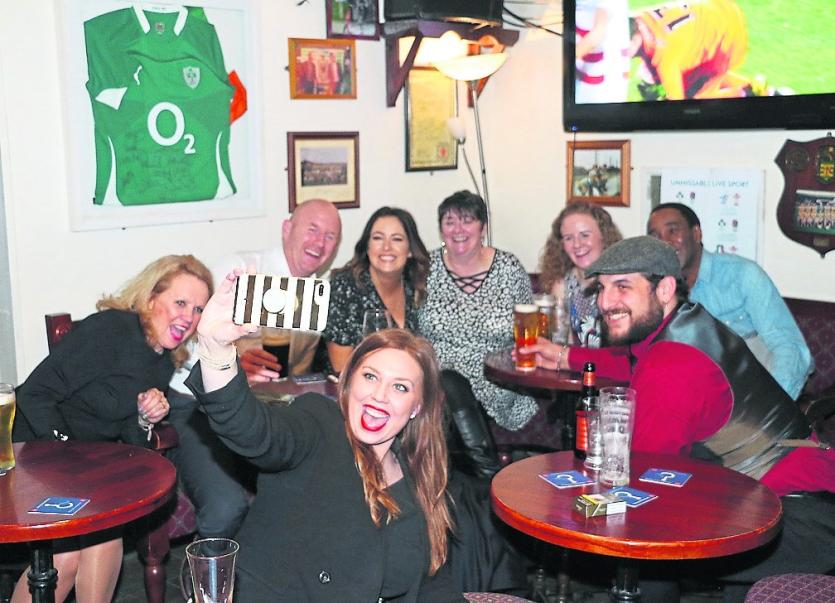 Making memories - the O'Brien's from Ardara capturing some great moments at the South of the Border Festival in Ardara PICTURE: MATT BRITTON

The standard of the songs in the Jimmy Kennedy Songwriting Competition in Ardara last weekend was amazing.
Claire Ward from Ramelton won with a beautiful song, ‘Remember’. Of the eight finalists, seven were women, all of the songs were of a very high standard and the judging panel had a very difficult task.
An integral part of the festival is the homage to Packie Manus Byrne and the legendary Patsy O’Hagan brought more than one house down with his hilarious tales.
Noel Slevin, Kevin Dunleavy and Charlie Boyle all added their songs, yarns and poems, and John Joe McBrearty and Jimmy McGrogan were the musical mainstays in the Corner House.
Interestingly, Jim and Fiona Byrne who are regulars in the Beehive Friday night sessions also edit and design ‘The Living Tradition’. It’s a full colour, bi-monthly Folk & Traditional music magazine that has been in publication for some years now. In that time they have managed to build a great reputation and solid readership base around the globe.
Based in Ayrshire, Scotland and Ardara, a dedicated team of folk and traditional music enthusiasts are the people responsible for the running of the magazine, with their past experience ranging from events organisation to live performing.
A few years ago, after Packie Manus’s death, renowned Californian harpist, Bonnie Shaljean, contributed a beautiful homage about her old friend.

An elegant gentleman
“I first set eyes on Packie at Loughborough Folk Festival in 1975, where I was wandering around the halls with my harp (an unusual sight in those days).
“I wasn’t a booked performer, and only carried it because there was nowhere I felt comfortable leaving it. I've often wondered what turn my life would have taken had I found a safe place to stash it. Just then, an elegant gentleman in a beautiful grey suit – complete with waistcoat and pearl stickpin – approached me, and paused to speak. He looked so refined and prosperous that my initial thought was, “My gosh, what is a banker doing at a folk festival?”
“Little did I know that his suit came from a charity shop for a few bob. After a month criss-crossing every inch of Australia, the sparkle has returned to JJ McBrearty’s eyes as he slowly contemplates his first pint back home at the 'South of the Border' Festival in Ardara PICTURE: MATT BRITTON

“He asked me if I knew My Lagan Love and, as good luck would have it, I did. He immediately reached inside his jacket and drew out a silver whistle, while I knelt down on the floor in my long hippie dress and put the harp to my shoulder.
“And, right there in the middle of the corridor, we struck up My Lagan Love. Before the afternoon was out, we had become firm friends.
“I was living in Golders Green at the time, and Packie rented a room in central London, where he worked for a firm of solicitors.
“It wasn't long before he was a steady caller at the big house I shared with four others, and I’d often cook us dinner while he sat at our huge kitchen table and serenaded me with tunes. Pretty soon, club and festival bookings started dotting the diary pages, and the rest, as they say, is history.
“It was also a lot of laughs. And usually Packie would get the last one. But not always.
“At least once, the tables were turned. The setting for this historic event was the club at Chipping Sodbury (which one of us - I can't even remember who - accidentally and with fatal permanence Spoonerised into Sodding Chipbury).”

THE STAR COMES HOME
“Packie had a well-known comic routine whereby he could play multiple whistles at once by fitting them into a cut-up rubber shower hose and blowing in one end.
“ After finishing this number, he described to the audience (all the while chortling in great glee) how he had nicked the hose from his landlady's bathtub and had done the dastardly surgery on it unbeknownst to her.
“Everybody had a lovely giggle over this, and Packie was feeling quite pleased with himself until he happened to glance down at the far end of the front row. And there sat none other than said landlady and her husband, who were in the area on holiday, and had decided to drop in to the club as a surprise.
“When I first knew him, Packie had a job with a firm of posh solicitors, all elegant mahogany and brass and wine-red carpets.
“But his wee cubbyhole was far away from this finery, which was a godsend to any secretaries or telephonists who were late to work. Once inside the front door of the cavernous and warren-like old building, they would dash downstairs into Packie’s den, hastily slip off their coats and drop their bags, and quickly grab a stack of papers or envelopes or a file folder (Packie kept a supply of these handy, expressly for this purpose).
“Then they would walk up the central staircase with their ‘work’ in hand, cool as you please, no sign of their tardy entry in evidence.
“Their bosses never did catch on. Packie always had a ready stock of safety pins, packets of kleenex and other essentials, so he was a great favourite around the office. Many tears were shed when he retired.
“All the light-hearted humour and blithe patter make it easy to overlook one of Packie’s prime skills: his songwriting. Whether funny ditties or serious ballads, songs were so much a part of who Packie was. For he had the tradition in him, and the true bard’s feel for the poetry of a line, deceptively simple, but conveying whole worlds. You could hear it in his airs too.
“He was not a pyrotechnic wizard at flashy jigs and reels, and never pretended to be. To expect this of him, as some did, was to misapprehend his true gift – the poet's gift, rather than the virtuoso's. In particular, his Donegal-inspired compositions, such as Bruckless Bay, Lovely Naran Strand and The Hills Of Inishowen, will live on for many generations.
“When Packie was 70, disaster loomed, as he was about to be made homeless. Accommodation in London was in a dire state (I'd worked as a housing officer for the Borough of Camden and was well-placed to know exactly how dire) and he was in despair.
“But the Irish look after their own, and soon Packie had callers: two dear friends from Ardara, Packie McGinley and Peter Oliver McNelis. This was no ordinary visit. They were there on a mission. “It's all arranged,” they said. “We've come to take you home.”