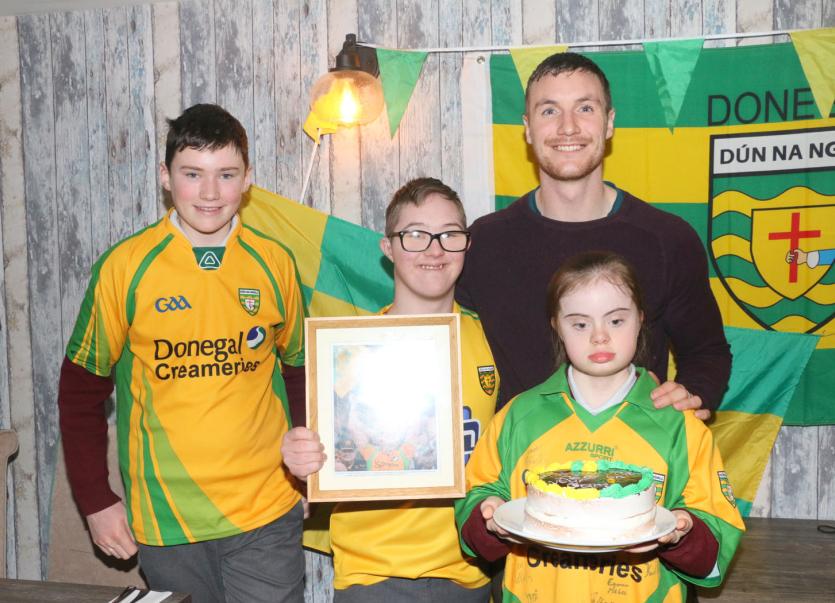 John, David and Eva from the AVS have a great surprise for Master Leo McLoone in Quay West

Well used to dropping down to Quay West in Donegal town for his cup of tea and fresh scone Donegal’s Leo McLoone received a big surprise early this morning from a very special group of students from the Abbey Vocational School.

Arriving into the restaurant a large group of his pupils, clad in the Donegal colours and who were hiding behind various places,  jumped out and gave the Glenties man a right shock.

The pupils with the help of principal Geraldine Diver,  Mary Brown and some of her SNA colleagues had decorated the restaurant in the Donegal colours to mark their hero’s 100th appearance in the county jersey.

Leo admitted to being totally caught off the mark but said he couldn’t have wished for a more pleasant and sincere gesture to mark the occasion.

The AVS has a proud history in GAA circles having produced a number of All-Ireland winners including Karl Lacey, Paul Durcan, Barry Dunnion and Joyce McMullin.

Geraldine Diver remarked: “Maybe now with a bit of help from Master McLoone we might produce some more! A welcome break from the staffroom for Leo and his colleagues in Quay West for the surprise party marking his 100th appearance for Donegal PICTURE: MATT BRITTON