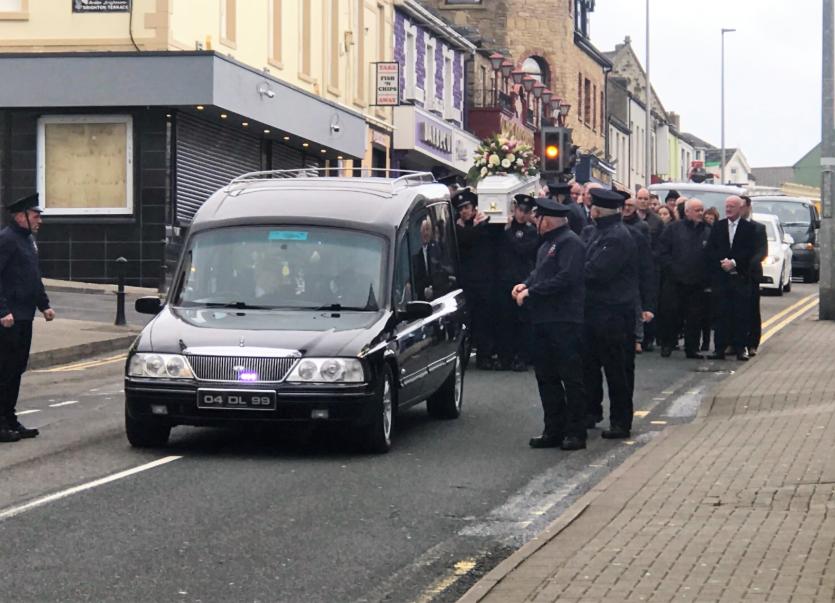 The funeral of Grace Gilliland in Bundoran on Wednesday morning PICTURE: Matt Britton

The normally bustling town of Bundoran came to a solemn standstill on Wednesday as the community said a final farewell to Grace Gilliland who died at the weekend.
In welcoming the large crowd to the Funeral Mass at the Church of the Star of the Sea in Bundoran, Canon Ramon Munster told the congregation: “You are witnessing something very special here today, you are seeing an angel going home to the Lord.”
Grace, 23, a daughter of Olga and Neil, suffered from Rett Syndrome, a rare genetic neurological and developmental disorder. She fought this illness with extreme courage and served as an inspiration to everybody who knew her. Indeed throughout her short life she was rarely seen without an infectious smile on her face.
Sadly, however, she lost her brave battle with illness on Sunday night.
Bundoran was enveloped in a mantle of silence as Grace was carried in her glistening white coffin by members of the fire service to her Funeral Mass. Grace Gilliland with her parents Olga and Neil

Shutters were pulled down on all the businesses as people lined the street, many openly shedding tears, and paid their final respects to a young woman who was a symbol of hope and inspiration to everybody she met.
Grace met many in her short life. Her story and determination attracted the attention of many well-known people who made a point of visiting her over the years - Johnny Sexton, Brian O’Driscoll, Michael Murphy, Ronan Keating, Nathan Carter, Westlife to name but a few.
She was instrumental in raising funds for valuable causes. Last year to the very day of her passing, she completed the Cara 10 mile Challenge in Bundoran, raising much-needed funds for a bus for the St. Agnes Day Centre in Donegal town.
At Wednesday's celebration of Grace’s life Canon Munster referred to the number of people who had travelled to Bundoran over the weekend and had a special mention for the Rev, Noel Regan and many of the Church of Ireland community who came to say their final farewells.
“Today is a sad day as we say farewell to a friend and an angel who has gone home; a person who has left her parents Olga and Neil and everybody who knew her with an infinite amount of goodness,
“These memories will indeed serve as some form of consolation.
“I want to say here publically today that Olga and Neill did everything possible to ensure everything possible could be done to ensure Grace’s comfort and well being. In fact I learned over the weekend that in all the 23 years of her life that there were only five days that they were not with her.
“She enjoyed all the normal opportunities of every child - she went to school, had a social life, went on holidays and her infectious smile and sparkling eyes let everybody know she was enjoying life.”