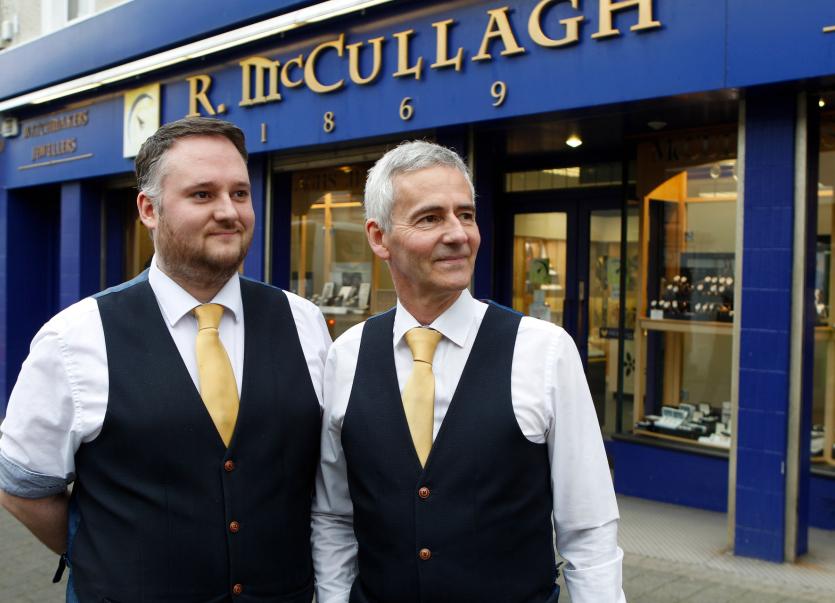 R McCullagh’s Jewellers in Letterkenny is celebrating 150 years in business this year.
Run by the Ball family, it is believed to be the oldest continuous family-owned jeweller in the country.
The history of the business goes back to 1869 when it was established in Letterkenny by Robert McCullagh who came to the town from Enniskillen.
Records show his father was a master jeweller in Fermanagh in the early 1800s, meaning he had trained a minimum of three apprentices to fully-fledged jewellery status, according to Julian Ball, the fourth generation of the family to run the business.
“It is unlikely that his father would have been a master and you not follow the trade. It’s unlikely you would have a choice in any other profession,” Julian’s son Gareth continues.

Railway engineer
How Robert ended up in Letterkenny is unknown but he married a local woman who is not named in records.
Their daughter Jean married William Ball, a railway engineer who came to the north west in the late 1890s to work on the Derry to Carndonagh railway line.
Jean and William moved to England where he worked on the Bath to London railway line.
Julian’s uncle CT Ball was born in 1902 and his father Robert was born in 1906. They were literally railway children, Julian says, born on different stages of the railway depending on where their father was working.
William came back to Letterkenny and ran the jewellers with his father-in-law, bringing the Ball name into the business.
From that point on the business has been passed on from father to son.
By 1969 the business had two shops: 52 Main Street, the original shop which was a jewellers, and today’s McCullagh's jewellers at 20 Main Street, which then sold glass and china.
The decision was made to separate the company into two with the McCullagh name staying with Robert and his sons Julian and Colin, while the other shop, operated by Cecil Ball and his son Lance, became CT Ball.
The two firms opened two fresh jewellers shops, both doing gold, diamonds, and watches.
CT Ball closed in 2017 with the retirement of Lance and his wife Judy.
Julian bought his brother Colin out and is now in the process of retiring as Gareth becomes the fifth generation to run the company.

Oldest continuous family-owned jeweller
Julian says they have been told that R McCuallagh’s is now the oldest continuous family-owned jeweller in the country.
“There are others that are of a similar age but we have been passed on father to son,” Gareth says.
Julian left school at 15 and trained as a watchmaker at the Irish Swiss Institute of Horology in Dublin and has worked in the business for 42 years since he was 18.
“Only 11 people qualify every year,” he says of the institute in Blanchardstown.
“My dad Robert was a qualified horologist and myself and my brother Colin both qualified as horologists.”
Gareth started working in the business when he was 16 and after studying a law degree in Derry he returned to Main Street.
Gareth’s passion was for diamonds and he trained as a diamond grader with the Gemmological Association of Great Britain in London, doing a two and a half year correspondence course.
In the run-in to his exams, he discovered he was colourblind but that did not stop him from achieving a qualification which is held by only nine people in Ireland, most of whom who are retired.
Gareth’s desire to have a qualification which requires a score of 85% to pass and was very time consuming, comes from his instinct not to rely on what he is being told by other people.
“I did not like the thought of being told things and not being able to back it up,” he says. “The advancements from when dad was buying stones to me buying stones, what you can do with modern technology, is so much greater than dad would have encountered.
“I did not like the fact I was being told something and I was passing it on to my customers. Now people can tell me whatever they want but I can do my own checks and decide what it is or it isn’t.”
Julian himself has experience of stones from his 42 years in the business and says it is important to have that knowledge so you can ensure what customers are getting is what it is supposed to be. Even the main suppliers can get it wrong. So unless you know what you are looking at, you can take the responsibility from the main suppliers but there will be times when they are not right and you have to double check with your own qualified people on the promises.”