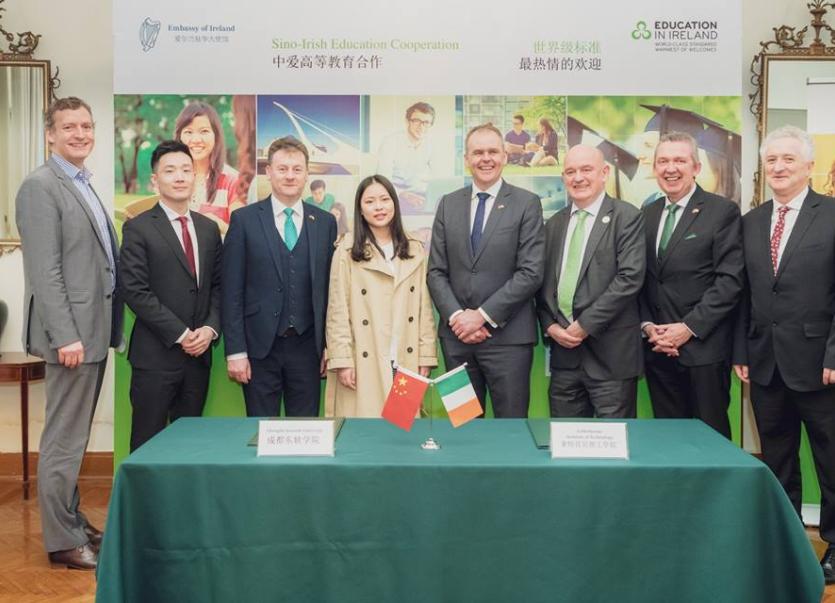 Letterkenny Institute of Technology has signed a memorandum of understanding with a university in China which is aimed at strengthening and deepening educational ties.

It is hoped that this important development will enable further international collaborations between Donegal in the North West City Region and China.

CNU was founded in 2003 and is supported by the Neusoft Corporation, China’s largest IT Services and Solutions Corporation.

It is headquartered in Chengdu in Sichuan Province in South Western China in a beautiful city of 14m people with three world-class tourist attractions which annually attract 27m visitors.

Chengdu is home to the Chinese Pandas, China’s ancient irrigation project, a magnificent feat of engineering which diverted a river to irrigate Chengdu Plain, and China’s Holy Mountain, home of the Taoism Religion.

CNU has over 10,000 students and their main focus is on Computing and Business Programmes and these programmes match well with LYIT’s programmes in Computing, Business and Design.

Since 2015 LYIT and CNU have engaged annually in a number of staff and student exchanges.

In addition CNU and LYIT have established a collaboration between LYIT’s CoLab, it’s Innovation Centre and CNU’s SOVO, it’s Student Office and Venture Office which encourages and supports student entrepreneurship.  Later in Spring 2019 LYIT looks forward to welcoming three student entrepreneurs from CNU-SOVO who will spend a week collaborating with LYIT students and Donegal based entrepreneurs.

Minister for Education and Skills Joe McHugh and Chief Executive of Donegal County Council Seamus Neely witnessed the signing of a memorandum of understanding between President Yinghui Zhang of CNU and President Paul Hannigan of LYIT in the Irish Embassy in  Beijing on Monday.

Minister McHugh said: “The relationship between Ireland and China is strong and is growing. Not only that but the diversity of relationship is impressive. The new opportunities for deeper ties in education and between the County Council and local government are an example of that.

“We are now looking to a new future of relations between LYIT and Chengdu.”