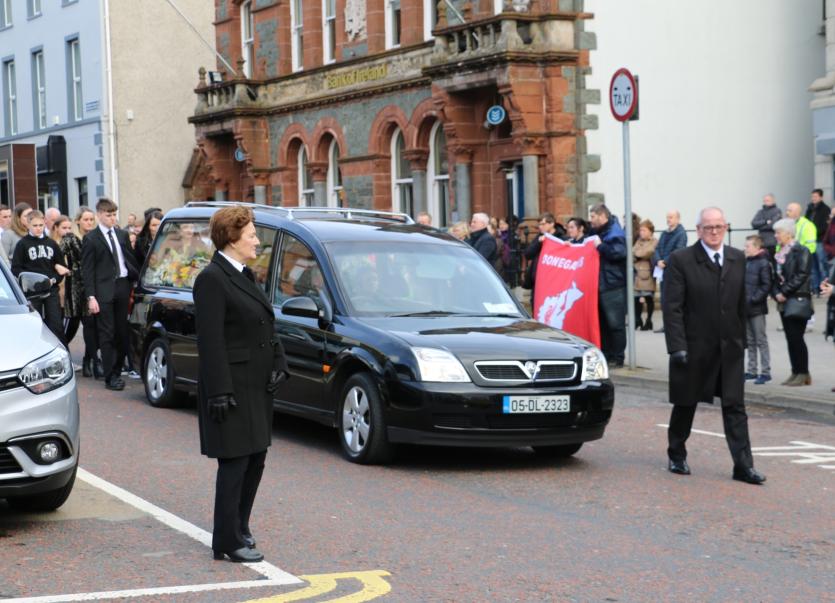 The ‘bottom of the town’ in Letterkenny was where Dessie Larkin spent happy, boyhood days.

So it was only fitting that those who lined the streets at Lower Main Street should break into a spontaneous round of applause as the funeral cortege made its way past on Dessie’s final journey following his funeral Mass in St. Eunan’s Cathedral.

It was their way of saying goodbye to a man whose sudden death last Monday has left a town in shock and sadness.

Earlier on Friday, as Dessie’s remains were brought from his home at Doon Glebe, New Mills to the cathedral, the cortege made a stop-off outside the place of his former home opposite Dunnes Stores. It was a poignant moment for the Larkin family on a sorrowful day.

Dessie’s close friend Fr. Paddy Dunne was chief-celebrant at the funeral Mass where Bishop of Raphoe, Alan McGuckian was among many con-celebrants.

A packed St. Eunan’s Cathedral watched on as mementoes of Dessie’s life were brought to the altar at the beginning of Mass, among them a Liverpool scarf, and a record by The Beautiful South, the first record bought to Dessie by his wife Mary.

The congregation included friends, former work colleagues and many from the world of politics who came to pay their respects. The Cathaoirleach of Donegal County Council, Cllr Seamus Ó Domhnaill and Letterkenny Town Mayor, Cllr Ian McGarvey were also present. Dessie Larkin’s time in politics was a big part of his life, but as Fr. Dunne said in his homily, there was so much more to someone who touched the lives of so many people.

As he began his piece, Fr. Dunne said it was going to be tough for him to speak about his life-long friend. But he delivered a beautiful tribute to Dessie and managed to touch on so many different aspects of Dessie’s life that so many people in the congregation could relate to.

He talked of Dessie’s love for his wife Mary, and their family, including their daughters Danielle and Courtney, and sons James and Matthew.

He spoke of Dessie’s friends, and how important they were to him. Many of those friendships, Fr. Paddy noted, were made way back when Dessie was kicking football as a young boy for Main Street and Oldtown. Those friendships remained strong ever since.

Fr. Dunne said Dessie was a ‘rogue’ who was full of devilment, and boasted a cheeky smile.

He talked about Dessie’s strong faith, and said one of the first things he did each morning was to say his prayers. He also loved his music, and enjoyed a game of cards.

Fr. Dunne also referred to Dessie’s love for his country, his county and his hometown, Letterkenny.

“He was a Letterkenny man, through and through,” he added. A Liverpool flag at Friday's funeral. Dessie Larkin was a lifelong Liverpool supporter

“There were so many organisations that he was part of, far too many to mention. But he gave his heart to this town, like his father before him, Senator James.”

At the end of Friday’s Mass, Dessie’s brother-in-law Jason Black offered a reflection on Dessie’s life.

It brought an emotional end to what was a lovely funeral ceremony, lit up by the beautiful singing of Assumpta Donaghy, Eavan and Riona Hennessy and Mary’s niece Grainne who played the cello.