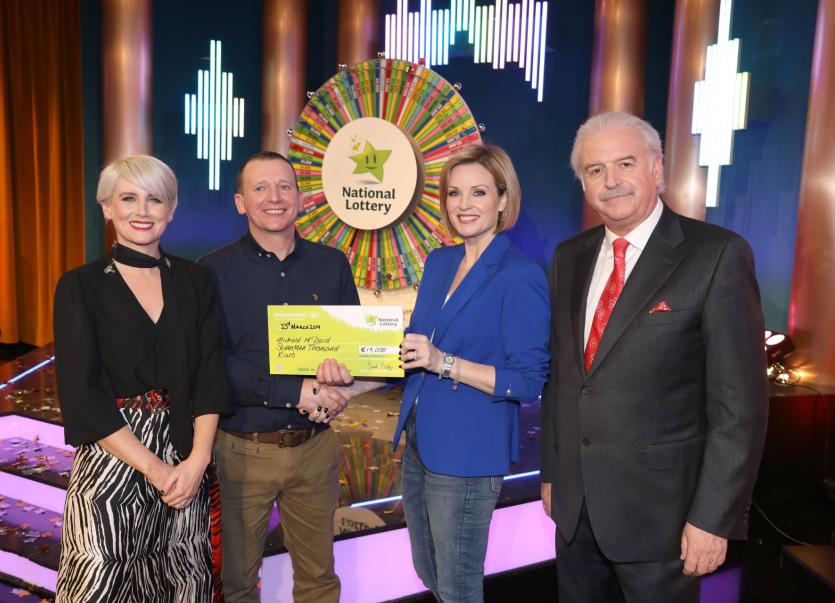 A bus driver from Donegal has won €17,000 when he appeared on Winning Streak, the National Lottery TV game show on RTÉ One last Saturday.
When Mickey O’ McDaid’s name was pulled out of the Winning Streak drum a fortnight ago, he didn’t believe it. That was because he is one of four Mickey O’ McDaid’s in his parish – the small town called Glenswilly in Donegal. As well as that, he had no Winning Streak scratch card sent in that week, so he was sure this wasn’t him.
That was until his wife, Lorna informed him that she sent in a couple of cards that week and she put his name on one. Meanwhile, his phone never stopped ringing with friends and family looking to know was it him who was on a Winning Streak!
After a sleepless night of wondering had his luck come in, Mickey celebrated after receiving a phone call from National Lottery officials to confirm he was the Mickey O’McDaid in question.
Mickey is Glenswilly born and bred and has been married to Lorna for seven years and they have three children together. His Winning Streak could not have come at a better time as the couple are currently conducting a self-build of their dream home in Glenswilly.
A bus driver by trade, Mickey works with Patrick Gallagher Travel and mainly looks after school runs on his daily beat.
He was supported in the audience in RTÉ by an excited Donegal crowd made up of friends and family, including his sister Marie and his sister-in-law, Geraldine McLaughlin, who plays for Donegal GAA football team. Geraldine’s sister, also a Donegal football star, Nicole McLaughlin, wasn’t able to be there as she was playing in a game versus Westmeath.
In his spare time, Mickey is a huge sports fan. He used to play for Glenswilly GAA as well as the local soccer club, Kilmacrennan Celtic. Nowadays he keeps fit by training in Letterkenny Kickboxing Club.
Donegal’s recent Winning Streak won’t come to an end there as two more players from Donegal will take to the Winning Streak stage this weekend as the names of Krzysztof Galera, from Bundoran and Eamonn McCreary from Doochary were drawn by show presenters Sinead Kennedy and Marty Whelan.